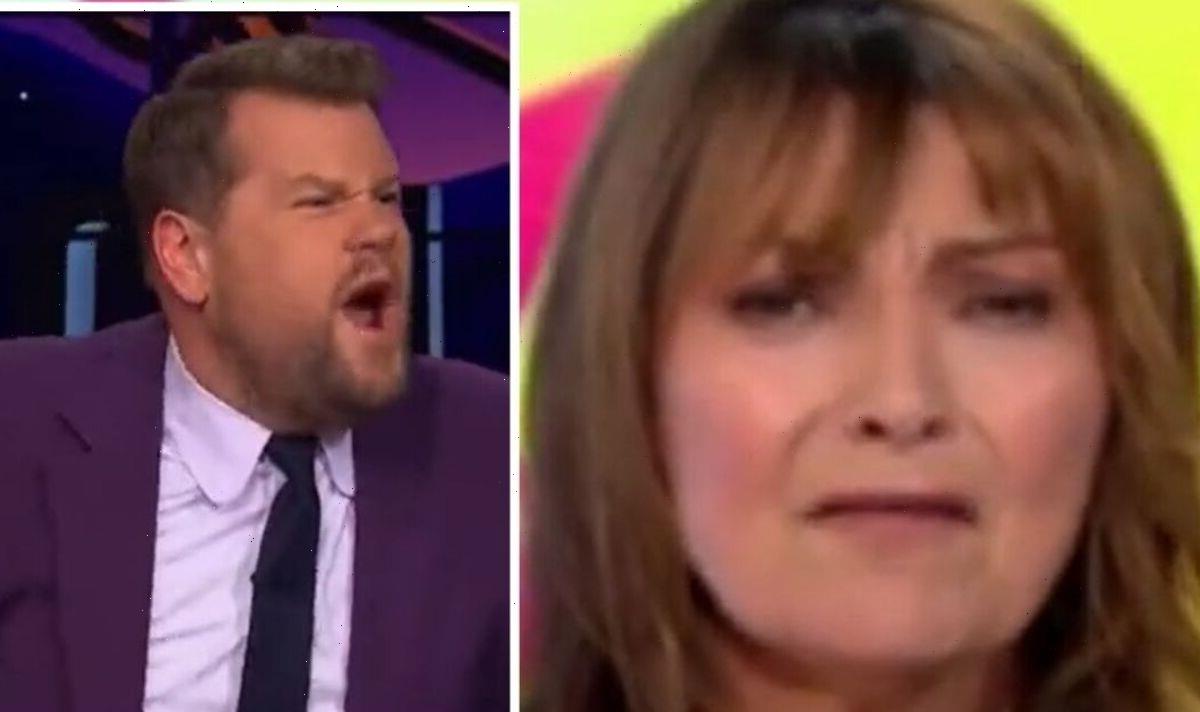 James Corden has been in the firing line over the last couple of weeks after it was revealed he was banned from a high-end restaurant for being rude to the staff. Now he is under fire again for reportedly “stealing” one of Ricky Gervais’ jokes from his 2018 Netflix special. Lorraine Kelly discussed the incident on Wednesday afternoon and slammed James for taking the joke, branding his apology “embarrassing”.

Speaking to LA entertainment correspondent Ross King, he pondered: “Was he kind of set up a little bit, did someone actually just say you know, ‘Do this and then controversy follows?’.”

The programme then played the two clips alongside one another so viewers could see the comparison within the jokes.

This followed with a near-on word-for-word joke that Gervais included in his 2018 Netflix stand-up special.

He said: “When you see Elon Musk talk about Twitter, he does this thing where he goes, ‘It’s the town square,

“But it isn’t, because if someone puts up a poster in a town square that says ‘Guitar lessons available,’ you don’t get people in the town going: ‘I don’t wanna play the guitar!’.

“Well, then that sign wasn’t for you ― it was for somebody else! You don’t have to get mad about all of it.”

Ricky’s clip played next where he joked: “You go into the town square and see the big notice board and there is a notice, guitar lessons and you go, ‘But I don’t f***ing want guitar lessons’.

Shocked at how similar they sound, Lorraine had her hands to her mouth in shock before she quipped: “Oh dear, does he have maybe writers that don’t like him?”

Agreeing, Ross added: “That is exactly what people are thinking here at the moment, to be honest.”

“I can imagine, that is very extraordinary!” Lorraine concluded. Before the conversation began between herself and Ross, Lorraine also branded Jame’s apology “embarrassing”.

When the clip first went viral on Twitter, Ricky retweeted the clip of James and sarcastically wrote in a since-deleted tweet:” The bit about the town square advert for guitar lessons is brilliant”.

Many began to question the similarities between the two gags, leading them to pick up more traction and backlash for James.

Ricky was asked by a fan whether he gave James permission to use the joke when he said: “No. I reckon one of the writers ‘came up with it’ for him.

“I doubt he would knowingly just copy such a famous stand-up routine word for word like that”.

James has since apologised for “inadvertently” repeating the joke that Ricky had started.

Taking to his show’s Twitter account on Tuesday evening, James wrote: “I inadvertently told a brilliant Ricky Gervais joke on the show last night, obviously not knowing it came from him.

“It’s brilliant because it’s a Ricky Gervais joke. You can watch all Ricky’s excellent specials on Netflix.”