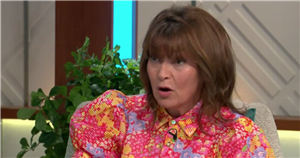 The 38 year old came on the popular show to discuss his latest project with presenter Lorraine Kelly as well as being a father of twins.

But as the star got into the discussion with the TV host, fans seemed to be concentrating more on his rather bushy moustache.

One person wrote: "I have no idea what he's saying, all I can think is MOUSTACHE."

Another distracted viewer penned: "I think @kelvin_fletcher tash could have its own Twitter page lol. I hope to see the play soon."

He also discussed the arrival of his twin boys Maximus Crowther and Mateusz Kelvin in May and also being a father to daughter Marnie and son Milo.

Kelvin's wife Liz recently hit headlines after she had to drive herself to the hospital when her water broke during the early hours of the morning.

But unfortunately Kelvin couldn't accompany her as he had to look after their two other children.

Explaining what happened, Liz told Hello! magazine: "I woke up in the morning and my waters had broken.

"I rang the hospital and they said to come in. Kelvin had to stay with the kids, so I drove myself to the hospital, which is an hour away, at 5am.

"I was a bit panicky that Kelvin might miss the birth if it happened straight away. They did a scan and told me, 'It's going to be today.'"

While talking on Lorraine, Kelvin said he has become better at multi-tasking since the arrival of his twin boys.

Earlier this year, Kelvin, Liz and their kids were seen on screens in BBC programme Kelvin's Big Farming Adventure.

The series which was filmed over the summer last year, saw the family move to the countryside as they built a new life on a farm.