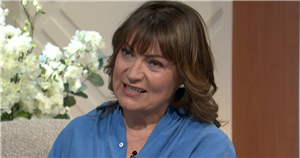 Lorraine Kelly was forced to quickly cut to a break after showbiz reporter Ross King suffered an awkward technical blunder and vanished from screens.

The TV host apologised to viewers as she told them that they would go to an unscheduled break to try and fix the issue.

However, the crew failed to get Ross back on screens, leaving Lorraine to try and finish off the segment by herself.

Attempting to wing it, Lorraine delivered Ross’s updates in his absence as she talked her way through the Oscars ceremony, and the rest of the showbiz stories of the day.

Fortunately for Lorraine, there didn't appear to be any further technical glitches during the interview with music icon Tom Jones.

Meanwhile, earlier in the show fans were left annoyed that Ricky Gervais' wife and author Jane Fallon didn't get an opportunity to speak on today's show.

The 61-year-old's viewers were less than impressed that she kept speaking over the writer.

At one point she even took the discussion away from the book promotion speaking about an earlier interview on GMB that left a bad taste in her mouth.

Her antics didn't go unnoticed by online users who took to Twitter to fume that they couldn't hear Jane.

One person wrote: "Lorraine love, the point of an interview is to let your guest speak not speak more than them."

Another penned: "NEXT: #Lorraine will be speaking while Sir Tom Jones listens."

While a third added: "I want to hear Jane a bit more #lorraine."

Lorraine continues tomorrow at 9am on ITV.