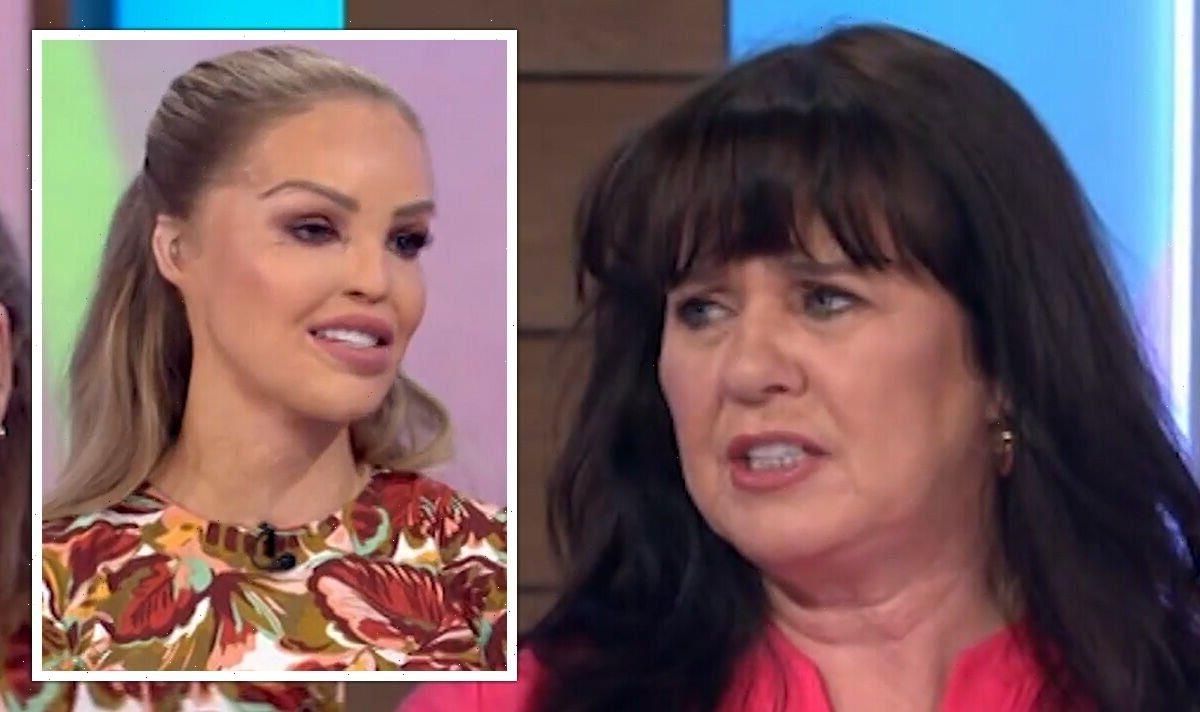 Loose Women panellists Kaye Adams, Coleen Nolan, Katie Piper and Brenda Edwards, entered a heated debate on Tuesday afternoon after it was announced nursery rhymes needed to be more vegan friendly. Nursery rhymes such as Three Blind Mice, Little Miss Muffet and This Little Piggy have had their lyrics changed after some felt they indicated animal cruelty. As the panel discussed the lyrics changing, viewers slammed the segment.

“They all went after the farmer’s wife, they told her thank you for saving their life, do you ever see someone acting so nice as three blind mice.”

Applauding her performance, Katie praised: “Much better, listen I think it is progressive, the other lyrics when you dissect it down, it is animal cruelty.

“Children do question those things, and I think just because something has always been a certain way doesn’t mean it can’t change.

“No one is forcing you to sing either version there is just now an alternative, and I think that is amazing.”

Laughing, Coleen began: “Listen, I agree in the respect that if they want to change it, change it, but when I was two, I didn’t even know that this little piggy went to the market meant a meat market.

“I thought it meant a market like it was going shopping, I was two, my mum would go ‘along came a spider,’ and she would tickle me, and I would get all excited.

“I don’t think two and three-year-olds, who they are aimed at, I really don’t think they analyse it that much.

“If you are going to teach your kids, I used to sing all those things at school, and I have never been cruel to animals, and I never would be, and I am so against it.

“If you want to, as a vegan, teach your kids about what happens to animals, then teach them properly it’s not a nursery rhyme, it’s awful.

“If your kid goes ‘What’s a market?’ say they are going to market to kill them and let them make their own minds up.”

Kaye turned to Katie and asked: “Why do you think it is better? Is all change good?”

“Well, I think progressive,” she stated. “It is a different world to what it was back then, and I think now it is about choice, it’s not about saying you cannot sing the other one.”

Coleen interrupted: “But they kind of are saying that, I don’t think changing the song is going to change people’s opinion of animal cruelty.

“Changing their opinion is showing them the videos that I have watched since becoming a vegan, that will change their minds.”

Kaye added: “The other thing is Little Miss Muffet, sat on her tuffet eating her curds and whey, they have taken out curds and whey because, of course, it is dairy.

“It’s now sat in a tuffet watching the bluebirds play, that’s not necessarily about animal cruelty,” but Katie and Coleen both butted in and claimed: “Yeah, it is, it’s the dairy industry.”

Viewers of the show were annoyed by the topic and took to their Twitter to express their views, with @Fluffadelic commenting: “‘People need to grow a backbone.”

Sarah_Oxon added: “Seriously, #LooseWomen is an insult to intelligence, how the hell are #nurseryrhymes cruel to animals?”

With @therealvnealo_ agreeing: “100% a nursery rhyme + animal cruelty is not the same. Absolute nonsense #LooseWomen.”

Not all viewers were in disagreement with the segment, as @Valinleigh1 praised: “Well done, Coleen! It’s about time someone raised awareness about the cruelty of the dairy industry. Dairy is scary in so many ways #LooseWomen.”

Rachel Howkins cheered: “I have a new admiration for @NolanColeen on #LooseWomen. She said exactly what she thought today about the cruelty of animal abusing industries… Well done.”

Paul Collingwood said: “Children are so much smarter these days, kids will understand that the lyrics have such a deeper meaning.” (sic)