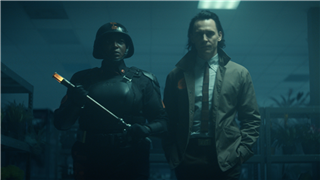 “The variant we’re hunting is you,” Owen Wilson’s Mobius said in the final moments of Loki‘s debut episode. Before the credits roll on episode 2, we’ll meet that villainous — or is she? — variant. But we’re getting ahead of ourselves, because there’s something far more important we need to discuss first.

KATE BERLANT IS IN THE MCU. This is not a drill: Kate Berlant, of finding that she misses Paris and gagging for you fame, is officially part of Marvel’s Cinematic Universe. It’s like when Amy Sedaris popped up in The Mandalorian wearing that wig, except (regrettably) only for a single line. Berlant’s character exists in 1985 and tells the TVA Minutemen who portal into a Wisconsin Renaissance Fair, “Some of us need this, you know!” That’s canon, baby.

This TVA unit, led by Sasha Lane’s C-20, is hunting the fugitive Loki variant, but instead quickly find themselves the hunted. The variant uses enchantment to possess, if you will, C-20, letting her do the work of dispatching each and every one of her Hunters in a sequence soundtracked with “Holding Out for a Hero.” The variant stabs the final Minuteman, steals their reset charge and drags C-20 off into a portal.

Back at the TVA, Loki (Tom Hiddleston) is getting tutored by thee baddest bitch, Miss Minutes, about Nexus events and how a rogue branch left unpruned “would lead to the destruction of the timeline and the collapse of reality as we know it!” (T-minus four episodes, give or take, until all multiversal hell breaks loose. You can call us Doc Strange, ’cause we will be into that madness.)

The main storyline of the episode is tracking down the variant and putting a stop to their Nexus events. Our Loki goes into the field as a consultant, explaining his powers (shapeshifting, illusion projection, duplication casting, etc.) and generally being a P in Mobius’ A. But track the variant, they do, in three easy steps.

Step I. Where Is the Loki?

Mobius grounds Loki to the TVA archives and gives him Loki homework: That is, reading everything they have on Loki and his variants. (Naturally, Loki takes advantage of the opportunity to try to obtain information about the creation of the TVA and the end of time — both classified.)

While reading a file on the destruction of Asgard — aka Ragnarok, of Thor: Ragnarok fame — Loki comes up with the hypothesis that the variant is hiding in apocalypses, thus avoiding pinging the TVA’s radar because any Nexus events caused by their arrival will be moot when the apocalypse happens. (“The timeline’s not gonna branch, because it gets destroyed.”) They test the theory in 79 A.D. in Pompeii — of Mount Vesuvius fame — where Loki gets his Jesus on, flipping tables and causing a scene in the market, and his theory is proven correct.

II. When Is the Loki?

Now, they just need to find out which Doomsday the variant is hiding in. Cross-referencing a candy recovered in episode 1 with a list of all natural disasters past, present and future, they land on Alabama in the year 2050, at a Roxxcart supermarket in the lead up to a cataclysmic hurricane.

III. Who is the Loki?

Meanwhile, Loki comes face-to-face with the variant — or, the various civilians (as well as Hunter B-15) enchanted by the variant for the purposes of this discussion. Two Lokis makes for twice the banter and our God of Mischief eventually reveals his own master plan: Overthrow the Time-Keepers and rule the TVA. (Loki’s gonna Loki.) But the variant has no interest in the TVA, not when there’s far greatest mischief to be made.

Hands glowing green, the variant steps forward to unhood herself as Lady Loki, as played by Sophia Di Martino. At least, all signs point to her being Lady Loki, down to her comic-accurate crown missing one of its horns.

“This isn’t about you,” she snarls.

Which is about when the reset charges elaborately rigged throughout the store are set off, each dropping through a TVA portal to parts unknown. At the TVA, flunkies watch in horror as the timeline lights up like a Christmas tree. “Somebody just bombed the Sacred Timeline!”

Di Martino’s variant opens another portal and waves goodbye to our Loki, though she kindly leaves the door open long enough for Loki to slip in after her right before it closes — leaving a hoodwinked Mobius and B-15 in his wake.

Head writer Michael Waldron was reluctant to tease anything about Di Martino’s character. “I think my house will burn down,” he told ET. “All of that and there are probably more questions to come and more answers to be given in these episodes.”

◦ So, who is Lady Loki? (If that is, in fact, who we just saw.) It’s all there in the name: Lady Loki is the female version of Loki, with the series having already confirming its title character’s sex is fluid. First introduced in Thor comics in 2008 by J. Michael Straczynski, Marko Djurdjevic, and Olivier Coipel, Lady Loki tends to be more diabolical than Loki, which seems to track with what we’re seeing onscreen. 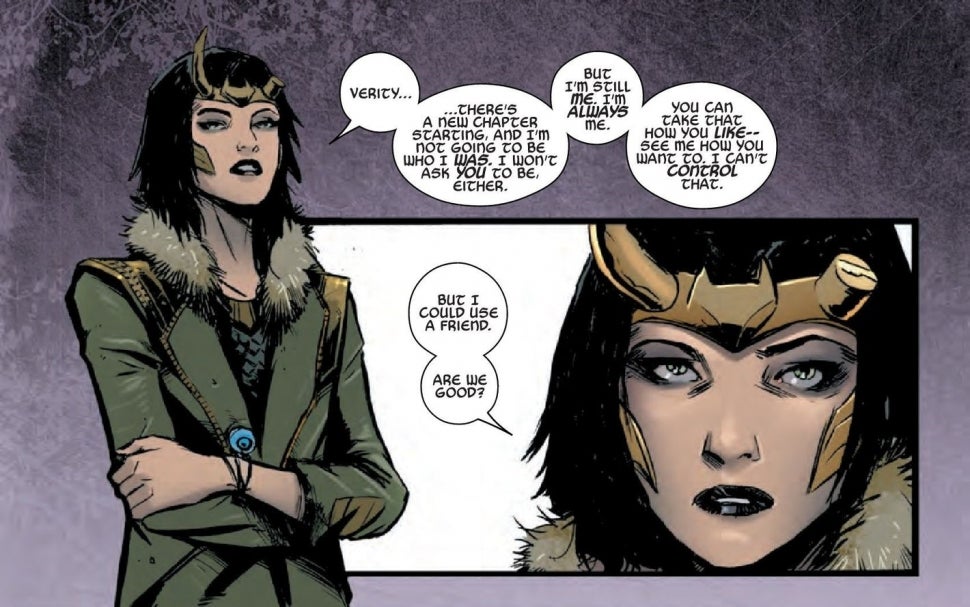 ◦ Who is the other analyst Renslayer and Mobius keep alluding to? When they twosome are in her office reminiscing about trinkets collected from past missions, she informs him, “You’re not the only Analyst working for me.” It’s mentioned in such a way that implies there will be payoff to come, but as of now, the only clue we have is a Franklin D. Roosevelt High School pen and all my Googling can’t find any MCU connection there.

◦ Roxx is an important prefix in Marvel mythology. In Loki, Roxxcart is referenced as a “vast superstore common to the era,” but comic book readers will know Roxxon Corporation as the Marvel Verse’s go-to nefarious corporation. Roxxon factored into the plots of Agent Carter and the recent Spider-Man video games series, and featured as an Easter egg in Iron Man 3. Here, it’s set dressing, but if this isn’t leading to the eventual introduction of Roxxon CEO Dario Agger, aka the Minotaur, I will riot.

◦ Will we see Owen Wilson riding a jet ski before the series is over?