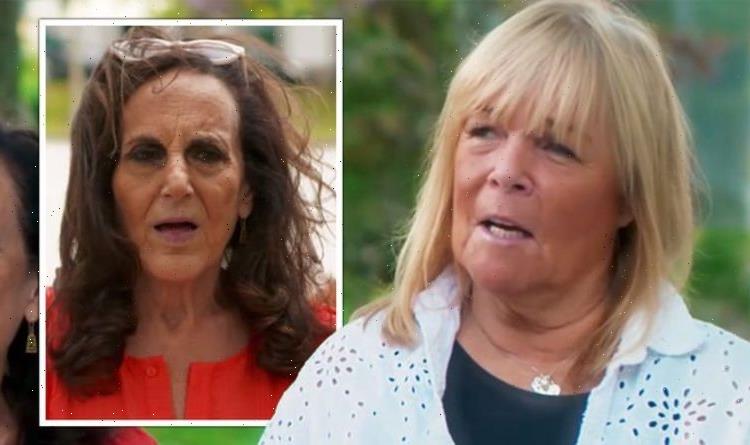 Birds of a Feather fans can spot actresses Linda Robson and Lesley Joseph in the new series of Celebrity Coach Trip. The duo have already made E4 viewers giggle with their antics on the new series, with Linda making a savage remark about her co-star.

Linda and Lesley have been joined by a wide range of famous faces on Celebrity Coach Trip.

They were delighted to team up with Ru Paul’s Drag Race stars Ginny Lemon and Sister Sister on Tuesday’s show.

Introducing herself to the group, Ginny exclaimed: “Hiya babs. It’s me, Ginny Lemon, fancy a slice?”

“I’m famous for just being gorgeous and secondly… a liar,” the drag star joked.

As the group welcomed the two drag queens onto the coach, Linda and Lesley shared their excitement.

The actresses admitted they were thrilled about the new arrivals while chatting to their fellow celebrities on the show.

However, it wasn’t long before Linda took the opportunity to make a dig at her co-star.

Linda explained how much she loves drag queens and joked they had one “of their own” on the coach, gesturing towards Lesley.

This isn’t the only dig Lesley has fallen victim to on the star-studded E4 show.

On Monday’s episode, a joke was made about both Linda and Lesley’s acting skills.

During the vote-off, Lesley got emotional while explaining why she and Linda had voted for comedian Matt Richardson and presenter Will Best.

Chatting away from the group, Matt and Will were talking about the Birds of a Feather stars decision.

Will jokingly suggested the crying could’ve been an act, noting Linda and Lesley’s performing skills.

However, Matt brutally remarked: “Yeah, but I’ve seen their work, they’re not that good!”

The series sees the celebrities travel across Europe on a coach tour, taking in the sights and experiences of the towns they visit.