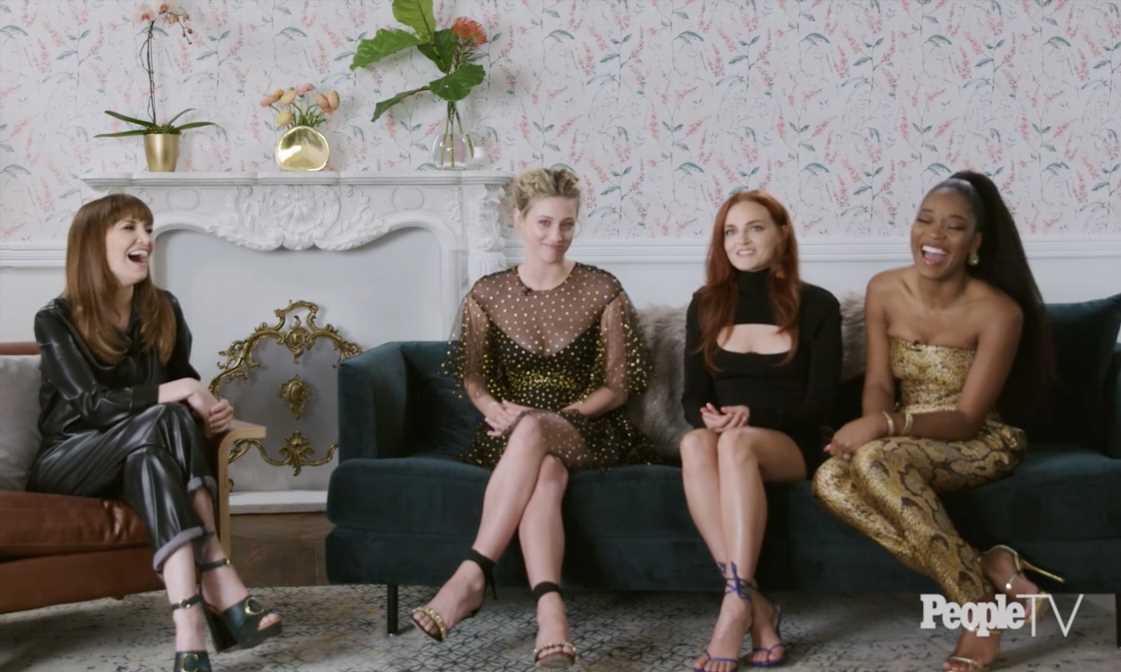 Every gang of badass women needs a ringleader, and producer-star Jennifer Lopez readily stepped into those sky-high stilettos on the set of her new movie Hustlers.

“She was like a mama bear from the start. You could tell she has that warm energy and she’s very touchy, she wants to connect with you. It’s very sweet,” Lili Reinhart, who plays one of many enterprising strippers who scam and steal money from their wealthy Wall Street clients under the guidance of Lopez’s Ramona, tells EW ahead of the fact-based film’s world premiere Saturday at the Toronto International Film Festival.

“I was nervously excited. I always loved her growing up, and my first scene in the film was with her,” costar Keke Palmer adds of meeting Lopez for the first time. “She was letting me know that she was glad I was a part of it and that she thinks we’re going to have a great time. I appreciated that she embraced me from the beginning, because it’s her movie, she’s the head of it, so it’s going to be a fun time!”

Nerves also got the best of Handmaid’s Tale actress Madeline Brewer, who supports the cast as a bubbly, late-game addition to their criminal operation: “On my first day, I didn’t stand on my mark, and Jen gently suggested that I should probably stand on my mark,” she remembers with a smile. “That was a nice intro!”

The cast quickly bonded, however, over the film’s lightning-quick 29-day shoot. To prepare, director Lorene Scafaria and her cast visited various strip clubs around the country to interview real-life sex workers and dancers about their approach to the craft. Lopez and Constance Wu — who leads the film as Destiny, a stripper-turned-mother who turns to Ramona for maternal guidance of her own — even trained with portable stripper poles. But, they weren’t the only ones who went full method preparing to warm up the cold, metallic pole with red-hot dance moves.

“I took a liquid motion class with Constance. It’s floor work, not pole work. I’m not good at any of it! I don’t have the core strength. It’s so athletic…. it requires so much strength that I definitely don’t have,” Scafaria says. “Even someone like Jennifer Lopez, who’s danced her whole life and is in incredible shape, said it gave her a totally new respect for pole dancers and strippers. It’s really athletic work.”

Outside the film’s spectacular elements about exacting revenge on America’s patriarchal capitalist structure, however, the women behind it feel the emotional core isn’t comprised of sex and titillation, but rather the heart and soul of a community rarely afforded whole representation on the big screen.

“It’s definitely going to surprise people. The trailer presents itself like a party, and it is, but there’s also so much more underneath that. You’re going to go see this with your girlfriend or your boyfriend and take away a lot more than you thought you would,” Reinhart observes. “It’s a lot more than a stripper movie: You’re getting a story about friendship, these women, and survival. When I watched the film for the first time, I wasn’t really thinking about the fact that they’re strippers, I was like, oh, these are just women and this is their career…. It’s not a movie about strippers, that just happens to be what they do.”

Brewer adds: “It was a conversation I had with Lorene early on like, ‘What kind of story are we telling here?’ Because it’s a movie about sex workers and it can go so wrong. If it was in the hands of a man, it wouldn’t be the film that it is or have the heart that it does, because it has more of a human element. It’s a story about people.”

Palmer also found value in the film’s cinematic essence, valuing Scafaria’s emotional focus packaged in a grand aesthetic that harkens back to the classic theatrical experience she feels is sometimes lost in the age of the diversification of Hollywood’s distribution methods.

“Hustlers is an experience. When you go to the movies, you’re expecting to have an experience with the film, and that’s what you get with this,” she explains. “It’s funny and it’s a party, but in the end, they’re really saying something. You walk away feeling like you didn’t waste your time and invested in some lives.”