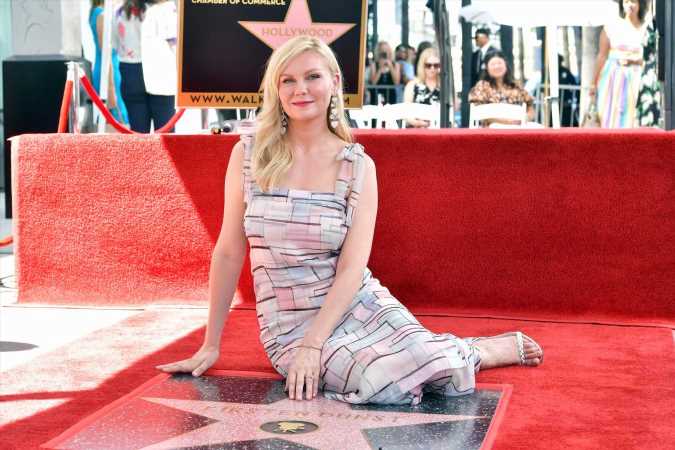 Kirsten Dunst skillfully hid a case of nerves while receiving her star on the Hollywood Walk of Fame.

Dunst, 37, spoke about the experience to Jimmy Kimmel on Thursday while on Jimmy Kimmel Live! saying, “I had a week of anxiety” before the ceremony.

“I’d wake up and I could barely eat. I just get nervous,” Dunst said, adding, “I hate public speaking.”

Dunst was accompanied by her fiancé Jesse Plemmons, their 1-year-old son Ennis, and her good friend, director Sofia Coppola.

“It was me, Jesse, and Sofia Coppola. We all hate public speaking so it was the worst people to ask, of all time, to talk,” Dunst said. “[We were] all terrified speakers.”

The actress described the event emotional event, saying she began crying when she saw her publicist.

“It’s all your friends and family and it’s this big historical thing but also, it’s really hot, there’s choppers above our head and tourists walking by,” she said.

Dunst and Plemmons’ son also made his debut at the ceremony when his grandfather, Klaus Dunst, placed him on the actress’s star to pose for the cameras.

Plemons, 31, took to the podium at one point during the ceremony to heap praise upon his fiancée, saying he “couldn’t be any prouder” of her than he was in that moment and pointing out the “humanity and strength and vulnerability” she brings to her roles. (The two began dating in 2016 after working together on Fargo.)

“Aside from the brilliant actor you are, I’ve also had the even greater pleasure of getting to know you as a person outside of work,” said Plemons, affectionately referring to her as “Kiki” and “Keeks.”

“Seeing the kind of mother, wife, daughter, sister, friend and cohort you are is why I and all of your friends and everyone else are here today and why we all love you,” he added. “It’s for the incredibly generous and amazing person that you are.”