Just when you thought you were out, Game of Thrones is here to pull you back in! Well… sort of. House of the Dragon, the Targaryen prequel series whose first episode premiered on HBO in August, is like if Game of Thrones cut out all the muddy and snowy scenes. For now, it’s all about those Dragon-loving Targs in King’s Landing. Because of the show’s smaller scope, little things like pricking your finger on the Iron Throne are a BFD.This may come as a shock to you, whether you’ve only engaged with Westeros via HBO or if you’ve read all of George R. R. Martin’s novels and subsequent materials, but a small moment in the first episode of The House of the Dragon may indicate that the King Viserys Targaryen might not be great at his job. Big gasp! Here’s what we know about this major, very-big-deal Easter egg.

First, a quick primer on Viserys:

You’ve already figured out if you watched the first episode that this Viserys is not the same as Daenerys’ brother who got a pot of molten gold to the face in Game of Thrones season 1. He won’t be born for approximately 150 years. But did you catch how House of the Dragons’ Viserys, played by actor Paddy Considine, cut his finger on the throne while banishing his younger brother Daemon?

The deal with that:

As Elia Dockterman wrote for TIME, that historically means that Viserys is unfit to rule Westeros. Aegon the Conquerer designed the Iron Throne to be pointy because a king should “never sit easy,” therefore making the Throne itself an excellent judge of character. It makes sense. If you’re not calm, cool, collected, and self-aware enough to sit in a chair that could cut you if you’re too impetuous then you shouldn’t be ruling a kingdom.

There are multiple references to this in the first episode of the new series. Early on in the premiere episode, maesters examine a puss-filled cut on his back that he claims is just from sitting on the Iron Throne. That would indicate that he has been unfit for a while. (Also, we all remember what happened to Khal Drogo… right? Little cuts can lead to deadly infections in Westeros and if Viserys dies soon… we’re in trouble.) 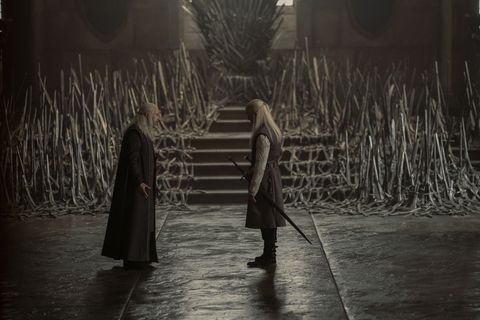 Wait, have we ever seen this happen in Thrones world?

If you look “back” to Game of Thrones, Dockterman points out, you’ll find that Joffrey once cut himself on the Throne—not surprising—and the Mad King famously cut himself so many times that they called him King Scab. That said, have we really EVER seen someone sit on the Iron Throne who was fit to do so? I’m willing to argue that Cersei was a pretty good Queen for a while, but we all saw what happened there. Anyway…

So, does this mean that we can’t trust the current King?

He’s currently got some things going for him and some strikes against him. On one hand, he pledges to name his daughter Rhaenyra as his heir and back her claim to the Iron Throne. He doesn’t trust his more erratic and violent brother, Daemon. He seems kind of jovial and dad-jokey. However, when his wife Queen Aemma has complications in childbirth he instructs the maesters to prioritize his unborn son’s life and really seems to have only made the feminist choice re: Rhaenyra as a last resort. And what exactly went on when his daughter’s bestie went to visit him in his chambers? It’s those seemingly nice Targaryens you have to look out for. 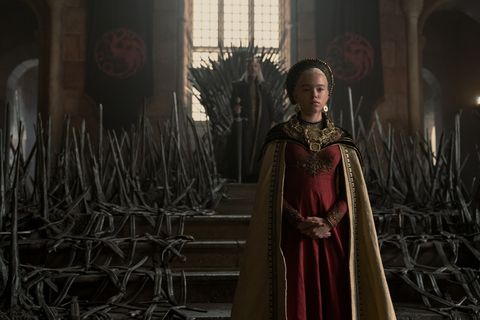 House of the Dragon also appears to be heavily indicating that the Throne should have gone to his cousin Princess Rhaenys Targaryen, who has been nicknamed the Queen Who Never Was, instead of him. The unfortunate thing is that we do know what happens, even if we don’t agree with it. Unlike Game of Thrones and the Song of Ice and Fire books, the book that House of the Dragon is based on is finished. There aren’t a lot of unknowns insofar as what happens when and who sits on the Throne (but we won’t spoil them for you here). The show likely won’t change much there, but it can change how we feel about what happens and the characters it happens to—and maybe clues like who gets cut by the Iron Throne can help form those opinions.