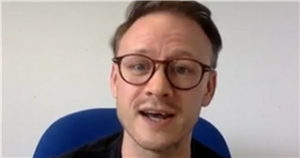 Kevin Clifton has hinted that he wants to return to Strictly Come Dancing as a judge after he left the show last year.

The professional ballroom dancer has revealed he would “happily” return to the hit BBC dancing competition if he could take on a “different role” on the much-loved show.

The 38-year-old, who has just landed the leading role in the latest production of Singin’ in the Rain, admitted he loved his time on the Strictly stage and admitted that there’s still a part of him that wants to perform on the show one last time.

But in his recent interview with Loose Women on Monday, the Grimsby native shared how he has set his sights on the judging panel alongside Motsi Mabuse, Shirley Ballas and Craig Revel Horwood.

Speaking on Loose Women, he said: “I love Strictly Come Dancing, I love the show. It's been a massive part of my life for a number of years.

“I did it for seven years and I still love it. There’s still a part of me that says ‘Never say never’ about going back to it.

“Maybe even if it’s in a different role, who knows, but for now everything’s theatre for me.”

Excited at seeing the cheeky chappie return to our screens again, Strictly fan Kay Adams added: “Well you did say perhaps another role. Anton’s got that judging seat for a while but he might just be keeping it warm for you Kevin.”

To which he replied: “Hey, if he wants to move aside, if any of the others want to move aside at any point, I will happily be a judge on Strictly Come Dancing.”

He goes on to joke: “Maybe Stacey can manifest it for me.”

This comes after the dancer made the shocking announcement that he was leaving the show after his public divorce from fellow dancer Karen Hauer.

The brunette hunk found love with his 2018 dance partner and TV presenter Stacey Dooley when they were partnered up for the latest series of the show.

And the pair couldn’t help but fall for each other when they made things official after they took home the glitterball trophy.

He began: “The past shared seven years have been some of the most wonderful years of my life.

“I am grateful to the BBC and Strictly Come Dancing for giving me the opportunity to have been a part of something truly special.”

He continued: “After finishing the last series with the Children in Need trophy and the Christmas Special I want to leave on a high and have therefore decided that the time has come to move on and focus on other areas of my life and career.”