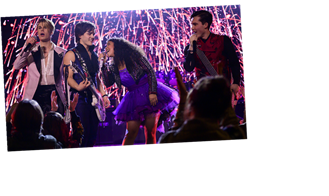 Spoiler alert! Do not proceed if you haven’t watched the first season of Netflix’s Julie and the Phantoms.

Netflix’s Julie and the Phantoms is the delightfully fantastical music comedy we all needed. After all, it introduced us to Madison Reyes, the breakout star of the half-hour series. But if you’ve finished the 9-episode first season, chances are you have a ton of unanswered questions following that twisty finale.

Here’s where we find Julie (Reyes) and her ghost band, the Phantoms — Luke (Charlie Gillespie), Reggie (Jeremy Shada) and Alex (Owen Patrick Joyner) — at the end of the season: After the Phantoms unknowingly struck a deal with the devil, they returned at the last second to perform at the Orpheum with Julie, accomplishing a dream they failed to accomplish before they ate those fatal hot dogs in 1995. But not everything is all fine and dandy. When it looked like the Phantoms were going to poof away forever, the foursome’s newfound love for each other appeared to stop the ghosts’ curse, and they were granted the power to touch. What does this new development mean? And is it permanent?

That wasn’t all, though. While Julie and Luke’s friendship was gradually blossoming into something potentially more, Julie’s other romantic prospect, Nick (Sacha Carlson), appeared at her front door. But the sneaky Caleb Covington (Cheyenne Jackson) was waiting in the wings, possessing Nick’s body with a secret mission in mind. And as Julie answered the door, Nick, ahem, Caleb, smiled that wicked smile. Oh boy.

To get answers on the cliffhanger, ET hopped on the phone with showrunners David Hoge and Dan Cross to break down the finale’s final scene, if they’re leaning into Julie and Luke’s possible romance and their plans for a possible season 2.

ET: We only see Julie’s mother as a young teenager in the first episode. Did you consider introducing her outside of the flashback? Is that something you’re thinking about for season 2?

Dan Cross: The mother is an integral piece of the puzzle.

David Hoge: We always talked about how and when we can, and if we can introduce her. We already have three ghosts. We don’t want to overload this poor girl with too many things from her past. But yes, I think it’s something we did discuss and something we will continue to discuss.

Even though a few people in Julie’s inner circle are in the know, like Flynn, and others are starting to catch on, like her brother, how long can Julie keep up this ruse that the Phantoms are ghosts or not from this world?

Cross: They have a lot on their plate in the second season, I’ll put it to you that way.

Hoge: Yeah, and it takes a lot. I think what we bank a lot on is people’s inability to want to accept ghosts because it’s such a crazy thing and that’s why Julie keeps it a secret. Because people are like, “Well, maybe you should be seeing a psychologist about this.” So she’s afraid people are going to think she’s lost her mind. We’re really laying heavy on that, which is why it helps us to not have to divulge their existence because people don’t want to know about that. That has helped us along the way a little bit. But yeah, it’s going to get a little more difficult, especially if they become famous, to keep their identity a secret. We’ll definitely have to be addressing that if we’re lucky enough to have a second season. 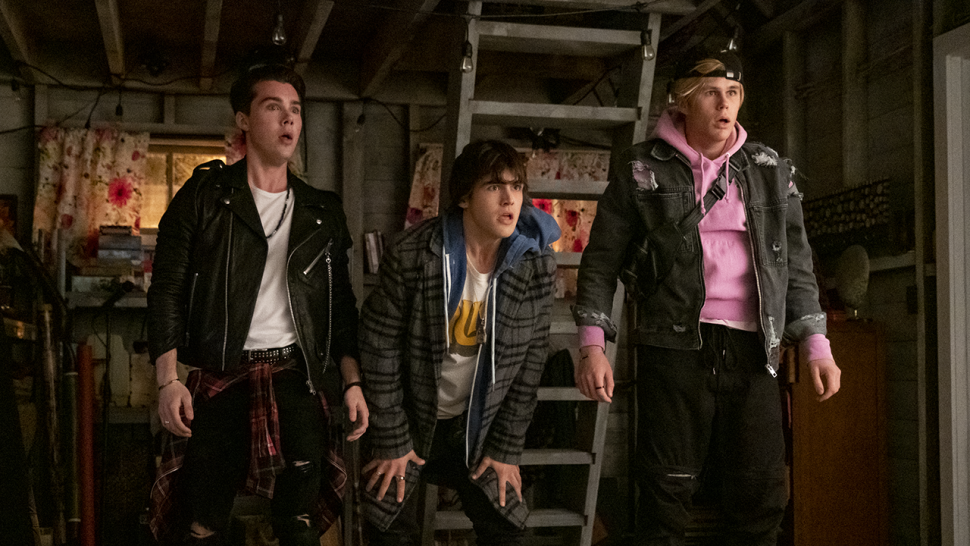 Julie wasn’t able to touch the Phantoms because they’re ghosts, but it appears that that’s now possible in the finale. Is that the case? What does that moment mean?

Cross: That’s a definite second season situation that we address.

Hoge: Is it temporary or not is the question.

Cross: It’stalking about friendship and the power of love. It doesn’t have to be the power of romantic love. It’s the power of love of the band; it’s the power of the band that gives them that ability to come back from their demise. I guess to that, I say: stay tuned. The power of love is the thing that ultimately saved them and a powerful, positive message in a time where people could use a little bit of that. Besides the curiosity factor as to why that happened, this is what the world needs — a little more love.

So the question of its permanence, if they’re actually full-blooded beings, that’s a question that you want people to ask themselves?

Hoge: Interesting. Sure. Just for curiosity’s sake, it’s good that they’re asking it. But the show’s called Julie and the Phantoms, so I think it behooves us to keep them as phantoms as long as we can.

Julie and Luke were slowly connecting over the course of the season. Where do they stand at the end of the finale? What are you looking towards in terms of their future?

Hoge: Yeah, I think they know there’s chemistry. It’s kind of an unsaid chemistry. They allude to it, but neither one of them are stupid. They know this is a difficult thing to address. “One of us is a ghost.” But emotions are emotions. The things she tells Flynn, “The heart wants what the heart wants.” Is there a limit to that? And second season, hopefully they’ll give us a chance to address that as well.

Is that why they don’t kiss?

Hoge: They don’t kiss because they can’t kiss. Making the audience wait in suspense is always wonderful and it keeps your stories going. But I think at the end, when they were all able to touch, we didn’t want to make it about that. It wasn’t about Julie and Luke. It was about Julie and the Phantoms. So definitely that’s why we didn’t do anything physical there at the end, because them being able to hug was the love that she has for all of them, not just for Luke. That moment was very intentionally set that way. But big picture, they don’t kiss because they don’t know what they are yet, meaning what their relationship is. It’s something they’re still exploring and don’t understand so they can’t get to a kiss yet, until maybe something that’s more well-defined.

Cross: It’s a bit of a minefield for a second season kiss, but yeah, we want to continue to grow that relationship because it’s working for us as writers. Besides the fact that the actors have chemistry when they’re doing the lines that we wrote for them, they had even more chemistry when they’re singing together — the whole band does. On my wish list is a tour for the band because when people get to see them and you see them perform live, just like any of the audition footage that was in the early release stuff that you can get online now, none of that is faked at all. Those kids are so into this show and the band. 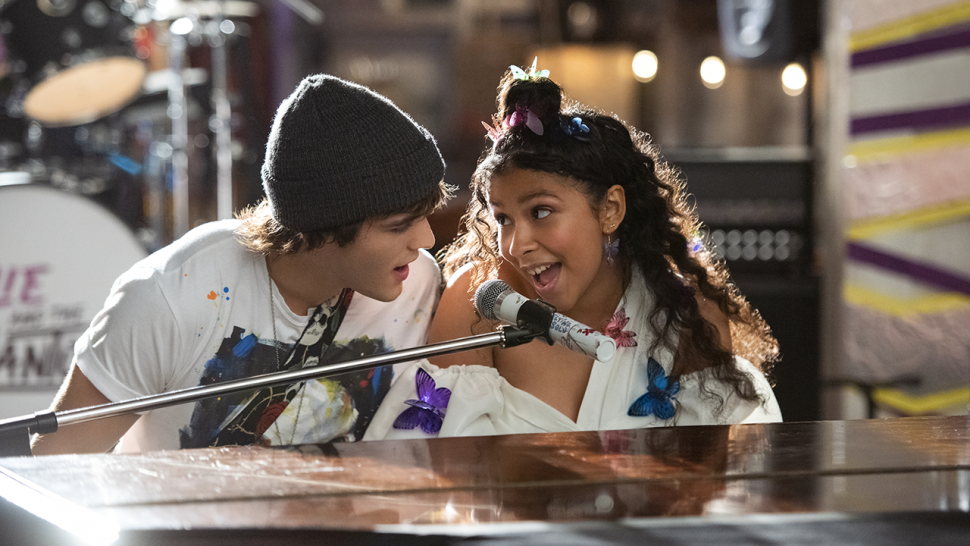 There is the cliffhanger of Caleb taking over Nick’s body. How does this new complication fuel the next chapter?

Hoge: It’s like what Nick says at the end there when Caleb has possessed him: “I have a fight too.” Caleb wants this band to be under his wing and not out there on their own, and he’s going to make that happen. What you’ve got is an evil spirit in Julie’s inner circle and that’s going to allow for a lot of problems. Your hope is our hope, that we are able to address this in season 2.

Is the Trevor situation going to be resolved? Do you feel like you haven’t scratched the surface on the broken dynamic between Sunset Curve?

Cross: The moment when he’s in the club — the actor’s name is Steve Bacic — and he sits down in that lounge area and he’s watching the band, is one of my favorite moments in the series. We just wrote the stage direction. He’s just bringing it right there. He’s bringing all the emotion. That’s the most fun part of that character, just watching him process that. If we get our season 2, he’ll also be right in the mix, trying to figure out how any of this is possible and trying not to be exposed for the song stealer that he is.

Hoge: There’s a lot to reconcile there, which is a lot of fun for us.

Luke had a big emotional moment in episode eight, where you learn a lot of backstory into what happened with his family before his untimely death. Do you plan on having similar Reggie- and Alex-centric episodes in the future?

You guys have history in working in the youth, YA programming space with The Thundermans and Pair of Kings. Why do you keep coming back to this genre?

Cross: It’s the time in your life where you’re cementing who you are as a person. If I was going to tell you a story of my life, I guarantee you, I pull from [ages] 12 to 15. Those are the times that are really imprinted on your brain. That’s the smart answer. The simple answer is, we just never grew up. So we stay there. (Laughs.)

Hoge: It’s relationships, it’s family, friendship, romance and heart. So much happens at this age that it’s just so fruitful. There’s so much to choose from. It’s a painful but wonderful part of your life. So to get to constantly revisit that, we’re actually grateful for that. And Dan said it, we haven’t grown up. It’s fun to stay in that area too.

Cross: Extended adolescence, but there’s a certain amount of responsibility that goes with showrunning. So you have to balance the two. We try to have fun in the room. Any writer that’s ever worked for us, I doubt will ever deny that we’ve had our share of responsible fun.

Julie and the Phantoms is streaming now on Netflix.