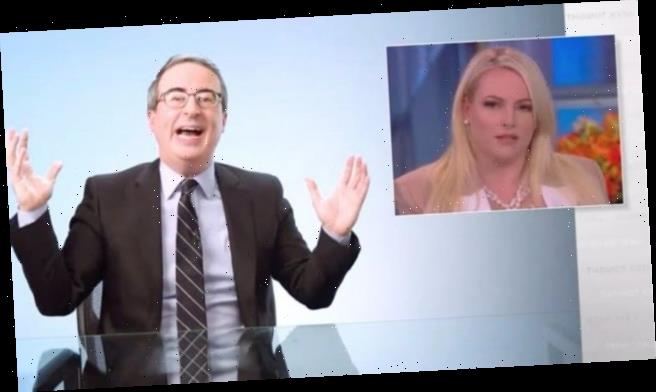 Throughout the past week, celebrities are speaking up about entrenched hatred and violence toward Asian Americans in the wake of the recent shootings in Atlanta that left six Asian women dead. During the March 21 episode of “Last Week Tonight,” host John Oliver pointed toward recent statements from Meghan McCain, co-host on the talk show “The View,” who on March 17 tweeted “Stop Asian Hate.” “A fine sentiment to throw up on Twitter after the fact,” Oliver said, before launching into torching the TV personality for what he believes to be her hypocrisy.

To make his point, Oliver turned to comments made by McCain in March 2020 where she said she did not have a problem with then-President Trump calling COVID-19 the “China virus.”

In the full video from 2020, McCain also added, “I don’t have a problem with it, and I think China, had they acted right away, and we had more access to information, maybe it wouldn’t have gotten to the place that it is.” McCain said she was pointing fingers at China, but was not a “proponent” of racial-profiling. (Watch the video below.)

“Oh good! Meghan McCain doesn’t have a problem with it,” Oliver said. “Listen not to the scores of Asian Americans telling everyone that the term is dangerous and offensive. Instead, gather around and take the word of a wealthy white woman who’s dressed like she’s about to lay off 47 people over Zoom,” probably referencing BuzzFeed’s recent layoff of 47 staffers over video call.

“It’s a fine sentiment to throw up on Twitter after the fact,” Oliver said, adding “there has to be an understanding that saying, ‘I don’t have a problem with calling it the China virus’ is very much giving space for hate to grow. The minimization of racist rhetoric plays into the harmful stereotype of Asian Americans as a model minority pitting them against other minority groups and pressuring them to swallow their experiences with racism, without making a stink because that’s how you earn white acceptance, and that is something that takes its toll.”

Oliver spoke in broader terms about the rising waves of anti-Asian sentiments during his show, saying, “Our long, ugly history of anti-Asian racism and the fact that it often peaks during times of crisis is the exact reason why, just last year, many were loudly warning that Trump calling COVID names like the ‘China virus’ was likely to lead to a rise in violence against people of Asian descent — an argument that not everyone, at the time, seemed to find convincing.”