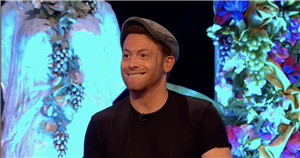 Joe Swash has revealed how his romantic proposal to Stacey Solomon nearly backfired after an awkward mix-up.

The former EastEnders actor appeared on Celebrity Juice on Thursday night and host Keith Lemon was dying to know all the lavish marriage proposal.

Opening up about the big day, Joe, 39, explained: "To be fair, the proposal was a bit awkward as well.

“I thought it would be really nice, I thought I’d do it on Christmas Eve and I took her into the forest and I got a lady to put loads of flowers out."

“When I took her through the forest, she see the flowers and she went, “Aww, I think someone’s died over there” because there was all white flowers."

He laughed as he went on to recall: “I went to her, “Oh, come on, let’s have a look, pay some respects."

Stacey, 31, then realised what Joe was up to and he continued with his plan to get down on one knee in the romantic woodland setting, before she said "yes".

It's not the first time the awkward funeral blunder has been brought to attention.

Appearing on Loose Women, mum of three Stacey told viewers: ""He'd asked someone to put these white roses through two trees that the boys always run through."

The mum of three confessed she confused the arrangement for a funeral display, paying tribute to a life that had been lost.

Stacey continued: "And I was like, 'oh my god, I think someone's passed away in our wood'.

However, once they were beside the display of roses, Joe popped the question, leaving his bride-to-be in tears.

The groom-to-be later appeared on the show, cradling their young son Rex in his arms as he discussed the run-up to the engagement.

In a sweet tribute to his leading lady, Joe said: "I can’t wait for her to be my wife."

Joe also explained he had asked Stacey's dad and sister for her hand in marriage, preparing for their special day months before the proposal.

On top of that, Joe designed her engagement ring himself – a diamond dazzler that left the Loose Women stars swooning.