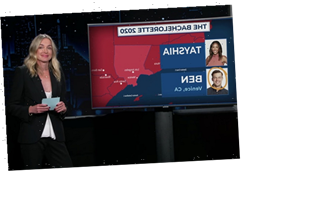 While the nation awaits the results of the 2020 presidential election, Bachelor Nation is awaiting the results for the second half of this season of “The Bachelorette,” which took a turn when a new leading lady entered the picture on Thursday’s episode.

Here to help predict the ABC dating competition’s future is Jimmy Kimmel’s wife, Molly McNearney, who has called the “winner” of eight out of the last 10 seasons of “The Bachelor” and “Bachelorette” combined. And this time she’s doing it Magic Wall-style.

Following last night’s episode of “The Bachelorette,” which featured the long-rumored premature exit of Clare Crawley after she picked Dale Moss early in the game, and the introduction of new “Bachelorette” Tayshia Adams, McNearney showed up on “Jimmy Kimmel Live!” to project the man who she believes will win Tayshia’s heart.

First she uses the Magic Wall to “draw your attention” to Dallas, Texas, where “Bachelorette” contestant Ivan, who is an aeronautical engineer, comes from. “This is historic, because no one has ever had an education on this show before,” McNearney said.

However, Kimmel’s wife says has traditionally been drawn to men like “Bachelor in Paradise” contestant John Paul Jones, “a total imbecile.” “But still we have to be patient, Ivan has a solid path to victory.”

McNearney takes the Magic Wall over to Venice, California to focus on Ben “a very likable Army veteran.”

“Now veterans perform well, even in traditionally blue areas. And when you look at that right there, you can see why. His face.”

“You’re saying people like his face?” Kimmel asked his wife. “I do,” his wife said.

Molly went through a few more possibility’s for Tayshia on her Magic Wall before saying, “It’s important we be patient, remain calm. We gotta wait for the ballots to come in.”

Kimmel then reminded his wife that there are “no ballots” for this and it’s just her.

“Oh OK, great. Well then I see a clear path for the Army veteran. I’m calling the race for Ben,” Molly said.

Watch the full clip above.