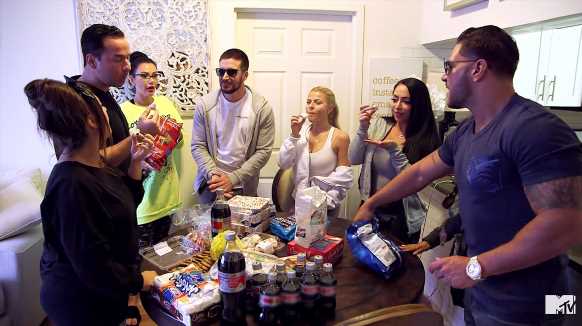 With 10 years of friendship under their belts, the Jersey Shore stars support each other through thick and thin.

In PEOPLE’s exclusive sneak peek at Thursday’s episode of Jersey Shore Family Vacation, the roomies gather at Mike “The Situation” Sorrentino‘s home the day after his sentencing. And if there’s one way to lift their friend’s spirits, it’s Funfetti cake — lots of it. (On Oct. 5, 2018, Mike, 37, was sentenced to eight months in prison and two years of supervised release in his tax evasion case.)

“Even the Keto Guido will take a bite out of this stuff for Mike today,” jokes Vinny Guadagnino as they arrive at Mike’s apartment laden with ice cream cake, chips, cookies, powdered donuts and soda.

“I honestly don’t know how Mike’s feeling today,” admits Jenni “JWoww” Farley. “Part of me wants to say he’s doing good, but the human side of me is saying, ‘How can you feel good?’ I feel like a good Funfetti, some chips and some garbage food the day after court morning is Mike’s needed medicine.”

Mike is touched by the gesture.

“It means the world to me that my homies came by to check up on me. I have the best roommates ever,” he says as the group toasts to him “living his best life.”

“I appreciate you guys coming to support me,” he adds. “It meant the world to me. In the beginning, when I first got to court and I saw you guys and I started to hug Nicole and Deena, I got a little emotional because you guys looked emotional.”

But regardless of his situation, he’s maintaining a positive outlook.

“I have a couple of weeks to just gather myself,” he explains. “It’s usually 30-60 days [until] you have to surrender yourself. But I’m going to see if I can surrender myself after the holidays.”

“But guys, at the end of the day, the most important thing is I got the girl,” he continues, gesturing to his then-fiancée Lauren Pesce. “And we have a wedding to plan!”

“In life there are important things, and those things are the intangibles,” he adds. “Family, love and friendship and I have all three. I’m holding my head high right now.”

The college sweethearts got married a month after Mike’s sentencing, on Nov. 1, at The Legacy Castle in Pompton Plains, New Jersey. He reported to the Otisville Federal Correctional Institution in Otisville, New York on Jan. 15. He is expected to be released in September.