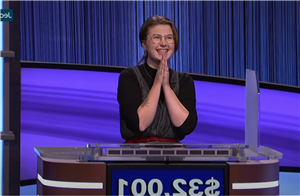 Current Jeopardy! champion Mattea Roach recently won her fourth consecutive game on April 8. The Toronto resident could land a spot in the game show’s coveted Tournament of Champions if her winning streak continues. Roach described how she’s trying to stay focused during the competition despite being in somewhat of a “fugue state”.

Mattea Roach racked up over $100K so far on ‘Jeopardy!’

After her fourth victory on April 8, Roach’s jackpot totaled $104,600. A tutor for the Law School Admissions Test (LSAT), Roach admitted she isn’t necessarily a trivia buff but rather has an innate thirst for knowledge and a knack for memorization that began at a young age.

“I almost feel as though, inadvertently, everything that I’ve done in my life has in some way contributed to me being able to be successful at Jeopardy!” Roach said, according to the Toronto Star.

Though the 23-year-old battles nerves before going on camera, she hones in on the task at hand once the Jeopardy! match is in play. Roach described the somewhat surreal experience of competing on the legendary game show.

“You’re almost in a fugue state, honestly, when you’re doing it,” she remarked. “It’s the closest thing that I think I’ve had to an out-of-body experience.”

The Call Me Kat star finds the unpredictability of Jeopardy! as one of the game show’s most exciting qualities, which includes the many different variables that can affect a player’s performance.

“I think it’s been a really fun and special time,” Bialik said. “But you know, that’s also the fun of Jeopardy! You never know what’s going to happen. Someone can seem like they’re winning, winning, winning, and anything can happen — they can have a tummy ache. And that kind of changes the course of their day.”

Roach attempts her fifth win at the Jeopardy! board on April 11, 2022.