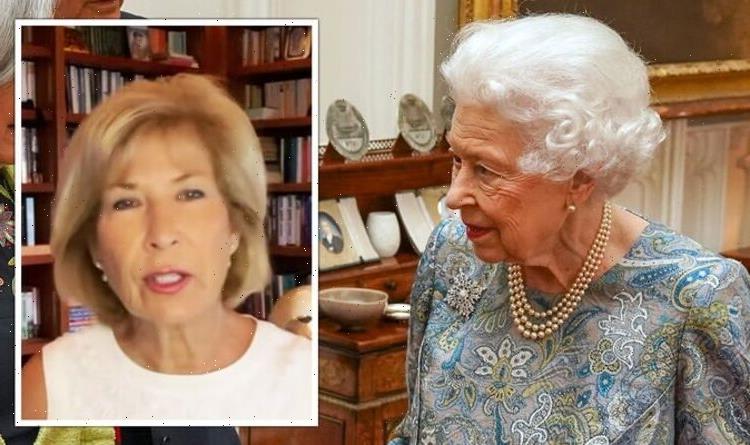 Royals: Queen made decision not to do Maundy service days ago

The royal expert, who appeared on Thursday’s instalment of GB News, claimed the monarch made the decision not to attend the service “days ago”. The event usually sees the Queen distribute special Maundy money to Britons in a service which commemorates Jesus Christ. A total of 96 people are attending this year’s service, but Jennie admitted “it’s too much” for the Queen as she is “a little bit weak”.

GB News host Anne Diamond asked Jennie to remind viewers what the Maundy service was and stated how the Queen had always attended in the past.

“It’s a service in which by tradition she hands out a little bouquet of flowers, but it’s more money, it’s a commemorative bunch of coins, most of which are collectable, and it’s the symbol of when Jesus Christ washed the various feet of disciples.

“It’s a community service so it is for members of the community who have done a good service who are invited along on this occasion to Windsor and the monarch greets each of them.”

She revealed there would be 96 Britons to greet at this year’s event, being held today, [April 14] which may have made the service last all day long.

Jennie admitted: “It’s just too much for her, you know, she has got mobility problems and she’s a little bit frail.

“The spirit is willing but the body is a little bit weak and so she took the decision not to go ahead with this a few days ago.”

Prince Charles is beginning to take on a King or Queen’s role, Anne pointed out following Jennie’s update on the monarch’s health.

Jennie exclaimed: “Yes, we are witnessing the transition really of many of the responsibilities of the monarchy, but she is not going to abdicate in my view unless something really drastic happens and perhaps she loses her mental powers.

“But thanks to modern technology she can continue to reign and be in touch and interact with people because of technology like this .

“I think she is enjoying that because she wants that connect with people, so this will be the pattern of the future.”

Broadcaster Jennie thought the palace had been “very wise” by announcing events the Queen cannot make in advance.

Anne interjected to say the monarch may be “reserving her energy” for her Platinum Jubilee celebrations this summer to mark her historic 70-year reign on the thrown.

Jennie agreed, adding: “This is the beginning of the royal season if you like, it starts with the Windsor Horse Show which is next month.

“She could make that as she could be driven from the castle into the grounds and she could watch some of the events from the car.”

Jennie explained the Queen “loves” the Chelsea Flower Show in May but admitted she might not be well enough to attend.

“The Chelsea Flower Show is a bit of a walk, it’s a lot of walking,” Anne added.

Jennie said Her Majesty has to take sensible decisions and recognise her frailty and design her life accordingly, adding: “She’s not going to give up”.