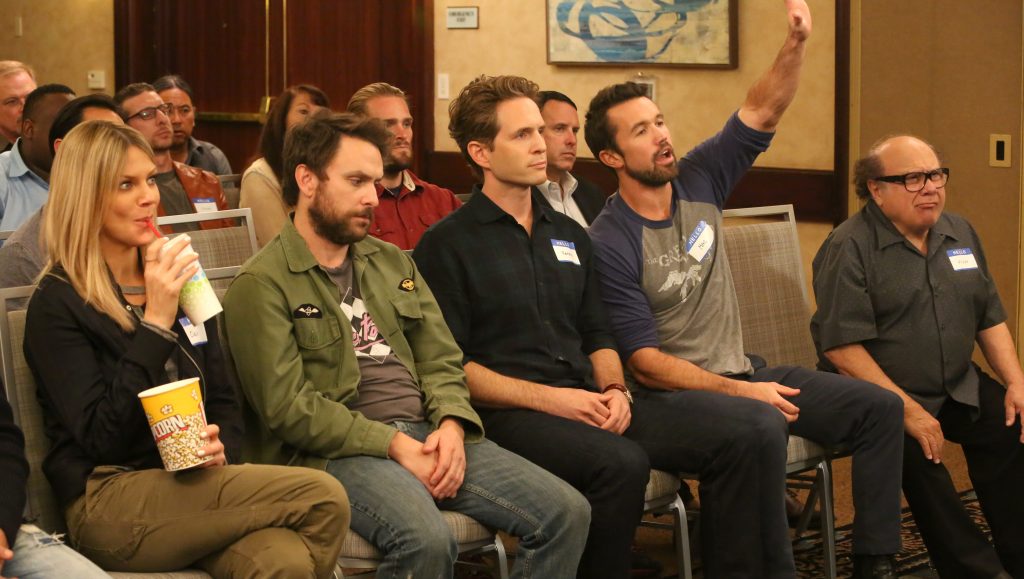 It’s Always Sunny In Philadelphia is currently filming its 14th season and after walking through the set during TCA (it’s quite surreal to be in Paddy’s Pub and the grimy charm of Charlie and Frank’s apartment), Rob McElhenney (Mac), Charlie Day (Charlie), Glenn Howerton (Dennis), Kaitlin Olson (Sweet Dee) and Danny DeVito (Frank) about how their characters how it speaks to the time through satire, its unexpected optimism and the wild stuff we can expect in season 14 — which includes Dolph Lundgren.

The show is something that has never been seen on TV before — and for 14 years the characters have done some horribly, self-centered, hilarious things to better themselves (or at least attempt to). The show balances this fine line with tackling hot-button issues but frames them in a comedic lens that pushes the envelope that many see as inappropriate — but not to their loyal fans.

“Our audience knows where we’re coming from,” said McElhenney, who also serves as an executive producer. “We very rarely get blowback because our audience is savvy enough to know we’re not advocating bad behavior, we’re satirizing it.”

The show is not afraid to tackle topics such as racism, #MeToo and things of the like, but it is coming from a place that doesn’t degrade it. As the only woman in the core cast, Olson is aware how her character is treated. She finds the group’s desperation funny and when they call her a bitch she said she wants to start laughing. Olson unpacks how you don’t often see characters like Sweet Dee, who allows misogyny and has no idea how to deal with it except by yelling. “We’re showing how ridiculous is to talk to someone like that,” she adds.

“The characters are one way, but the show is never celebrating that behavior,” said McElhenney.

Day said, “The #MeToo episode…it’s an important topic. We dove head first into a topic and got away with it.” He adds that they  We are talking about something and approaching it that is thoughtful but funny.”

The show, which we learned has a title inspired by an A-Ha’s “The Sun Always Shines On TV”, has tied ABC’s The Adventures of Ozzie and Harriet as the longest-running live-action comedy series. If it goes beyond 14 seasons, it can break that record.

During the session, it is revealed that the gang will continue to have off-center stories including an appearance by Dolph Lundgren as John Thundergun, a film noir episode, a story about global warming, a Waiting For Godot-themed laser tag episode and an episode where the gang puts their apartments on AirBnB in an effort to find love — which will be one of two episodes directed by Howerton.

When asked if Mac will get a boyfriend out of the AirBnB episode, McElhenney responds, “Maybe.” He also addressed his coming out story and whether or not it changed the character.

“He’s pretty much exactly the same,” he said. “Our characters might change — but they don’t evolve. He’s not a better person.”

The show is often seen as a “filthy” comedy — but Day states that it shouldn’t be known as just that. “There’s a fundamental misunderstanding of what our show is. I hate that our show is dismissed as filthy.” He adds that they’ve lasted so long because they are thoughtful and are smart. “I don’t think we’re dirty…We are trying to say something about us as Americans.”