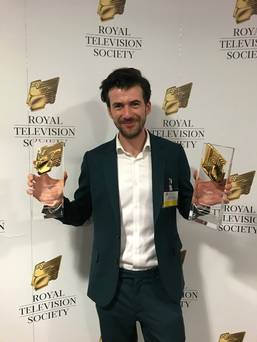 Ciarán Charles from Leitir Móir in Connemara produced the short film, titled Smoked Mackeral, loosely based on his own experiences growing up in Galway.

The film won the awards for Best Drama and Best Writing at the ceremony held at the British Film Institution in London. The awards have previously recognised producers such as Sally Wainwright and Idris Elba.

Ciarán was the only Irish filmmaker in the category and said the win came as an unexpected surprise. The 34-year-old made the short with what he describes as a “skeletal crew.”

“It means a lot to us,” he said. “There’s only four of us so it required a lot of goodwill from my village at home. It’s mad – Irish people are really good at supporting and being really generous.”

The short film, shot in Leitir Móir, is a “semi-autobiographical” account of Ciarán’s own childhood as it tells the story of two teenage friends growing up on the Wild Atlantic Way. The film has been screened internationally, receiving good feedback at festivals such as Newport Beach Film Festival and Irish Screen America in New York.

“I think identity is very important to me,” Ciarán said. “A lot of film makers just make things for the sake of it.

“Growing up in the Gaeltacht, I come from a big family and storytelling is very much in our DNA. I wanted to depict the Connemara landscape and area through the medium of film. I had a lot of fun growing up there.”

Ciarán has now started his own production company – Rockall Films. The firm is currently based in Galway with hopes of producing “ambitious and imaginative” films that will appeal to a wider European audience.