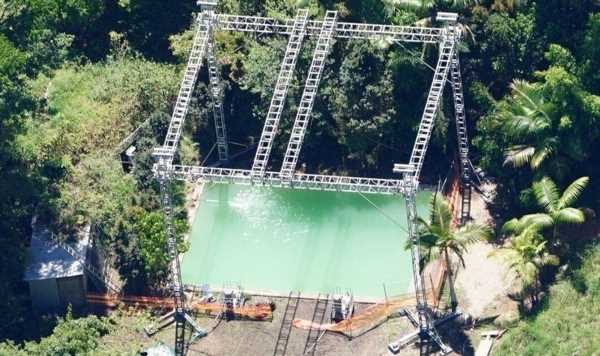 I’m A Celebrity… Get Me Out of Here! is finally returning to Australia after two years of holding the ITV show in Wales due to the coronavirus pandemic. The team are back in the Australian jungle where the contestants will sleep, eat, bond and encounter some unusual bugs around their camp. New images have emerged today revealing the new camp and some of the first challenges the contestants are set to encounter.

Just like in previous years, the whole camp is connected by walkway bridges where the contestants can leave the base camp to enter the challenge areas.

Also making a comeback this year is the skyscraper challenge where designated celebrities will have to balance on the end of a beam.

Standing at the top of a skyscraper, this challenge is designed to test their patience and balance while tackling their fears of heights.

Other images include a sneak peek into some of the first challenges the stars will encounter, one including a creepy-looking green pool at the side of a run-down set.

In previous years, the challenges at the beginning of the series usually determine which team goes straight into base camp, and which team will be living off of scraps for a few days.

The derelict set, called Loon Saloon, could resemble challenges which have been done in the past where the contestants will have to find yellow stars to win meals for the camp.

However, this could also be a separate camp in which the losing team will have to spend a few nights away from the main camp.

There has been no word as to whether this is how it will happen this year, but by the look of the images, it is set to be a whirlwind first episode.

The new series is set to kick off on Saturday, November 6 at 9pm on ITV, with a 105-minute special episode.

ITV confirmed I’m A Celebrity’s return by posting the news on social media, along with the caption: “Mark your calendars… the countdown is on!”

This series is starting two weeks earlier than it did in 2021 as ITV bosses have had to accommodate for the World Cup which begins nearer the end of the year.

The stars have already begun to arrive in Australia ahead of their stint which include DJ Chris Moyles, Love Island star Olivia Attwood and soap stars Sue Cleaver and Owen Warner.

A source told the Mirror: “The celebs normally arrive over a four or five-day period and some come in just a day or two before filming and are still a bit jetlagged in camp.

“But there is none of that happening this year, everyone will be here a week before they get into camp and some are coming out 10 days before.”

I’m A Celeb bosses and hosts Ant McPartlin and Dec Donnelly have been desperate to get Chris Moyles on the show for a number of years and have finally succeeded.

A source previously told The Sun: “Chris is a huge signing for I’m A Celebrity and they have been trying to sign him for years.

“Previously he’s turned them down for a number of reasons but this year feels like the right time.

“Chris has signed up and is preparing himself mentally and physically to go Down Under. This a huge moment for him and he cannot wait to get stuck in.

“Fans of the show are in for a real treat and Chris has no doubt there will be some people who will be ringing to vote for him to do some of the gruelling trials.”

Last year, Chris admitted he would struggle on the show because of his crippling fear of heights.

I’m A Celebrity… Get Me Out of Here! returns on November 6 at 9pm on ITV.