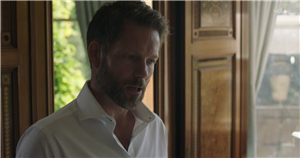 Some fans of ITV crime drama Innocent were left fuming during Thursday night's finale of the show, as Matty's killer was finally revealed.

It turned out that Sally's ex-hubby Sam Wright had committed the murder of the young lad – after admitting in a shock twist that the two had been having an affair.

Sam admitted the truth to Sally in their bedroom, as he said: "I never meant to hurt him. I'd gone up there to talk, that's all."

But as Sam had attempted to end things with the teenager, Matty had threatened to reveal their relationship to the entire town.

"I tried to reason with him, but he was drunk," Sam explained, as he described how Matty had thrown a bottle at him, which he had later picked up to hit the young lad with.

But the shock ending riled some viewers, who argued that it was offensive to the LGBT community to constantly have gay characters be "killers or paedophiles".

"The guy being gay and being the killer because he will be outed. UGH. Again?? The homophobia and the lack of flavour," one viewer wrote on Twitter.

Another chimed in: "Can we stop making gay characters in dramas either killers or paedophiles?"

"Once again a gay person is made a killer," ranted someone else.

As a fourth penned: "I really do think this was a great series but why is the twist that the villain is gay so common now?"

However, others were impressed with the shock ending, comparing it to the series finale of Broadchurch.

"I never saw that coming!" one social media user wrote.

Someone else added: "I didn't expect it to be him! Good ending!"

"Bloody hell what a twist that is!" a third posted.

During the episode, Sam explained: "I don't remember picking up the bottle or going after him. I don't even remember hitting him, I just remember the look of surprise on his face afterwards.

But Sally was understandably betrayed as her ex had let her rot behind bars for a crime she didn't commit.