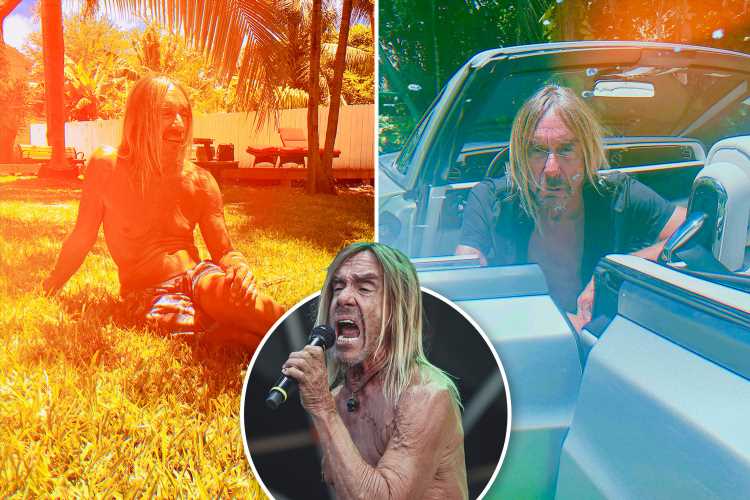 His wonderfully lived-in face breaks into a wide, toothy grin and he starts laughing infectiously. 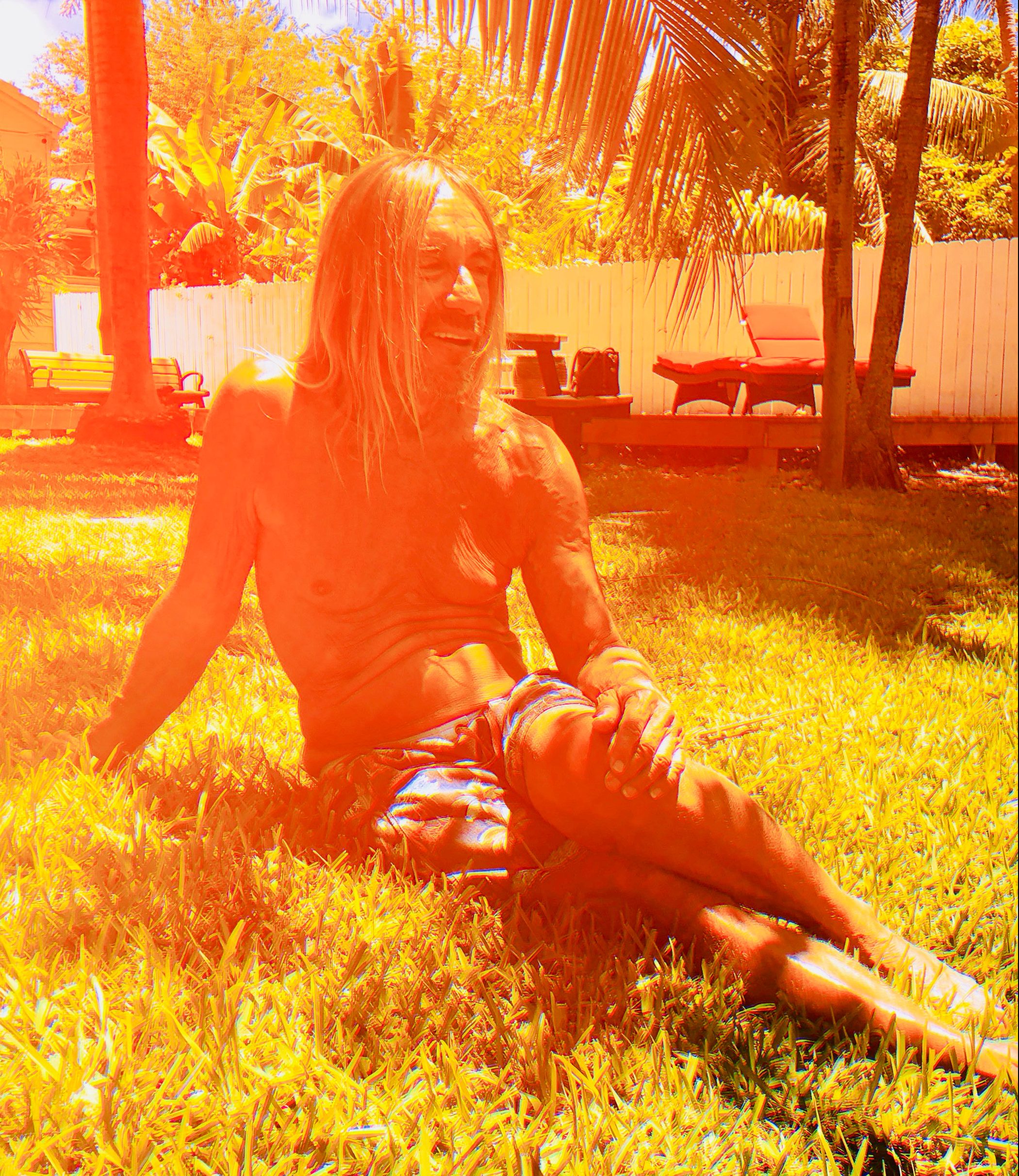 “It’s a much easier life than my former position,” adds the 72-year-old “godfather of punk,” the bearer of rock’s most admired torso and the subject of some of its wildest tales.

Iggy’s outrageous stage antics and his crazy, drug-fuelled youth are the stuff of legend but if you spend a little time with him, a thoughtful, funny, endearing, gentle soul is revealed.

“I’ve been through a lot but there’s been a terrific pay-off late in life. Some amazing things have happened, which surprise me frankly. 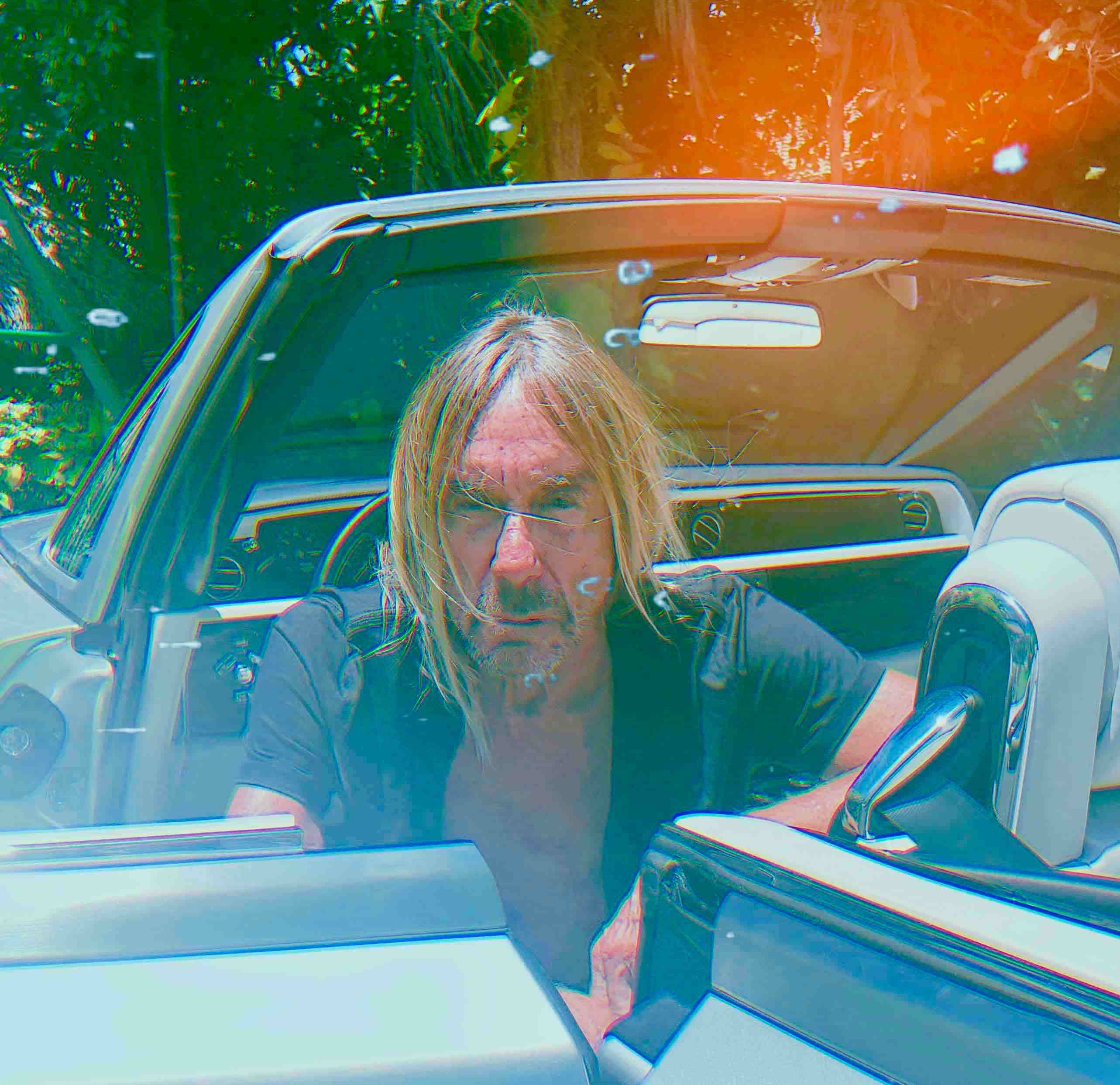 “I have a pretty wife (Nina Alu, his third), who’s very intelligent and a nice bird, Biggy Pop, a Moluccan cockatoo with his own Instagram.”

Iggy, Biggy and Nina live in Miami which he calls a “dumb beautiful town full of weird, tired people — Scarface types, hustlers and vainglorious hedge fund guys. But there’s a soft light about it, nice clubs and access to calm, warm waters”.

He adds: “I like the ocean and I swim a lot. I go to the Caribbean, the Caymans, very easy to get to and not a big schlep.” 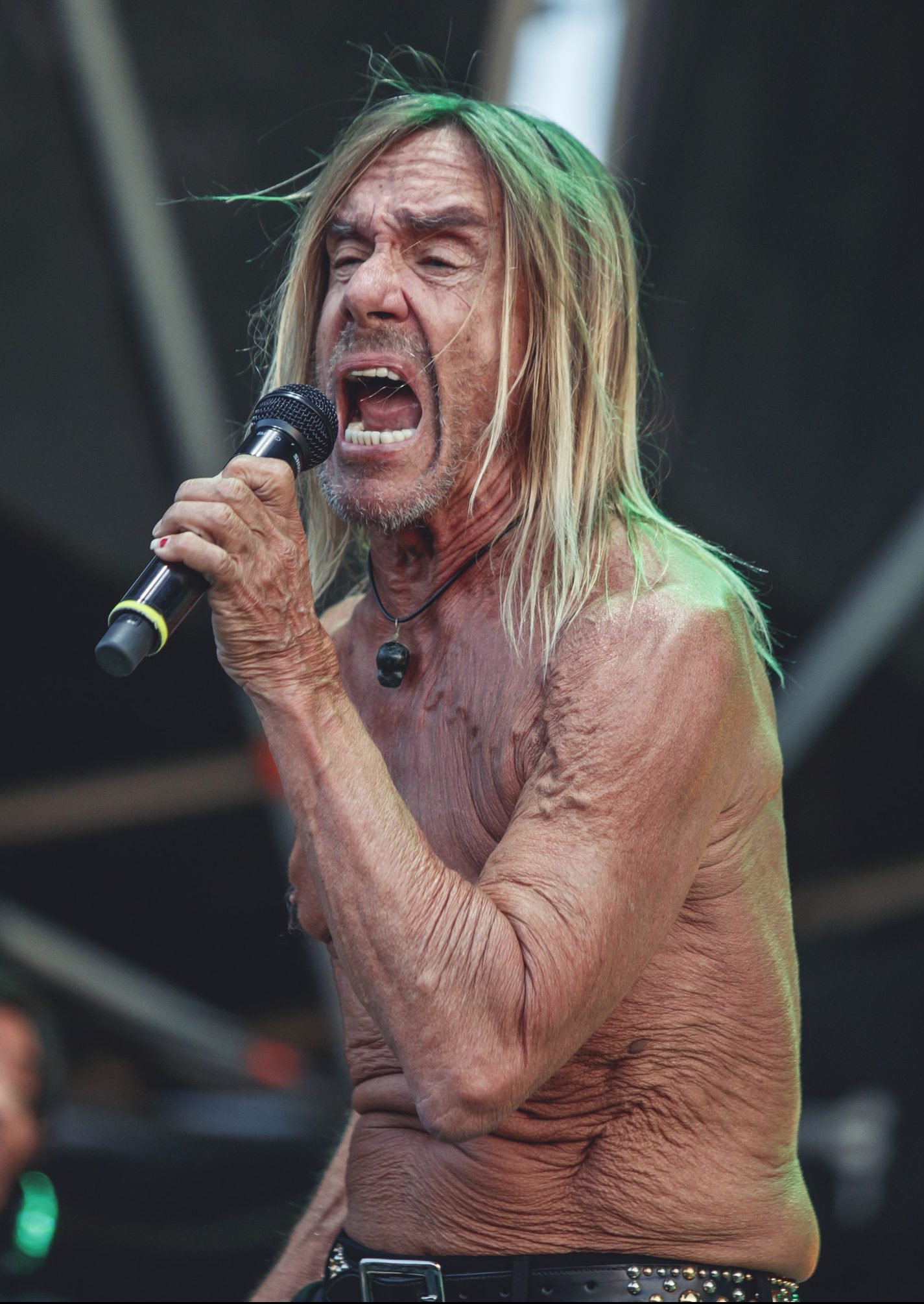 From our particular bend in the Thames, we can view the Houses of Parliament, Tate Modern, The London Eye, The Shard and countless other landmarks. Iggy, it is plain to see, feels at ease in the capital.

He looks fighting fit, dressed smartly all in black. His blond, centre-parted hair looks the same as ever — like Rachel’s from Friends.

He greets me with a warm handshake but before we talk about his new album, the mesmerising Free, it’s time for a quick health check.

“How is that amazing body of yours?” I ask. 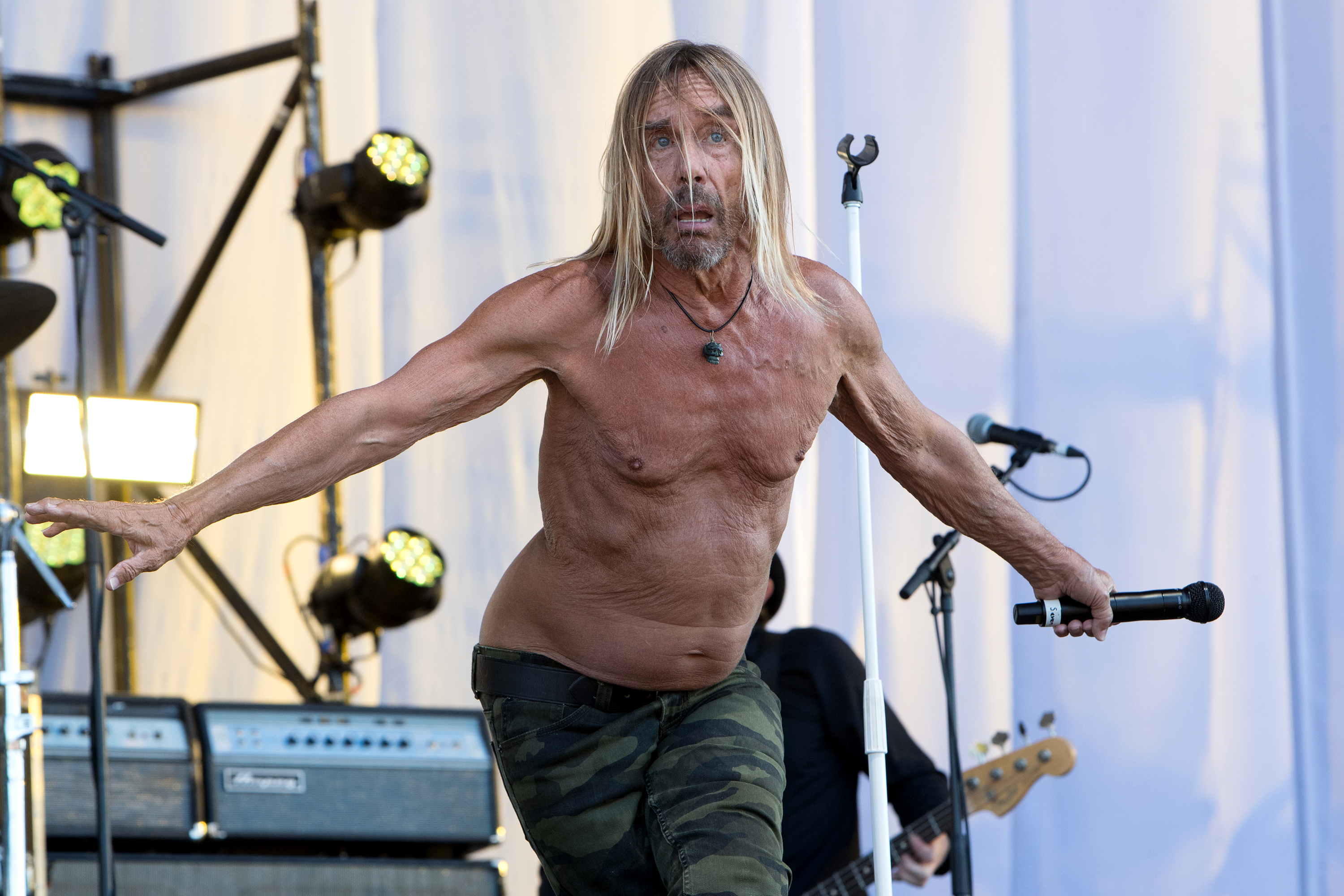 “The central plant is very strong,” he replies, choosing his words carefully, stating them slowly. “The breathing’s very strong, the digestion is good, the blood pressure’s good and even the circulation is very good.”

It’s almost as if he regards his slender frame as some separate entity.

“The weak part is the skeleton. You see the funny shape in the fingers?” he continues, stretching out his bronzed, knobbly, heavily-veined hands to me. “There’s a little bit of arthritis there and a little bit in the right hip. There’s one disc out of place in the spine and there’s a little curvature but if I have to walk across the Thames right now, I can do it.” (I think he means via one of the bridges, not actually on the water.)

Just after he passed away, we were rehearsing China Girl. I couldn’t reconcile him not beinghere

There’s more laughter, followed by: “I wouldn’t enrol in a marathon or anything like that, though!”

'WHAT DO I DO THESE DAYS FOR DRUGS'

These days, exercise and moderation are essential for Iggy’s efforts to extend his life less ordinary. That body is a temple. “What do I do these days for drugs?” he muses. “Well, there’s a few things I take but I don’t get high. I have a good internist who says, ‘You’re low on this or you’re raised on that’. So I take a little stuff, just normal stuff.

“I like a good red wine with dinner and my choice depends on what I’m eating or how I’m feeling or where I am. It might be a nice claret or a Bourgogne or, if I’m lucky enough to be in Italy, the wine is always good, especially in the Piedmont region. 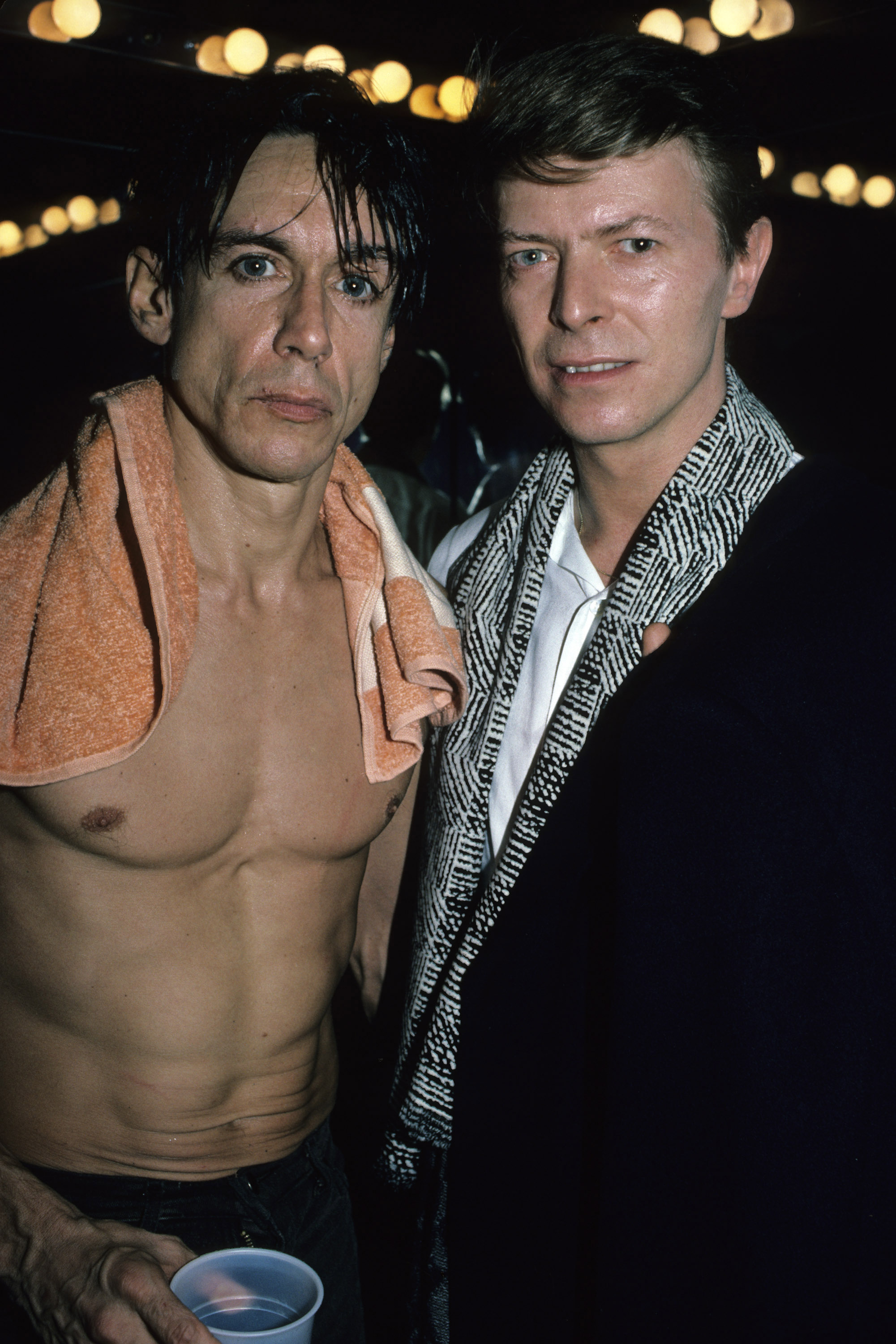 “I like champagne. I’ll have a couple of glasses while I wait for dinner tonight. I can roll with that but I make sure I eat on it.”

His careful routine extends to the nights he’s playing live. “I used to have a couple of beers before I went on but not any more. I just do Chinese exercises and visualisations to get it together.”

Like Keith Richards, who he admires immensely for staying true to himself, Iggy is one of rock’s great survivors, outliving contemporaries and musical kin like David Bowie and Lou Reed.

He has performed 12 gigs so far this year and cries: “I didn’t do one stage dive, not one! I worked the front of the house but I didn’t dive.”

'ONCE I DIDN'T DIE AT CHRIST'S AGE, I WORKED OUT WHAT I HAD TO DO'

As long as he takes to the stage, Iggy will play his trump card — that singular, sinewy torso. “You want to see me put an edge in the room? Strip off that shirt and there’s an edge in the room.” He recounts the moment he first adopted his iconic, muscular pose during the infancy of his original band, punk forbears The Stooges, when they would sing the immortal I Wanna Be Your Dog.

“At the first gig, I had an aluminium afro wig. I was wearing a maternity dress and golf shoes which I was scratching on to a piece of galvanised steel,” he recalls. “By the second gig, I realised we didn’t need all that stuff. We wanted to keep things primal, minimal.

“So it was just a pair of Levi’s, bare feet, no shirt and white face (make-up). 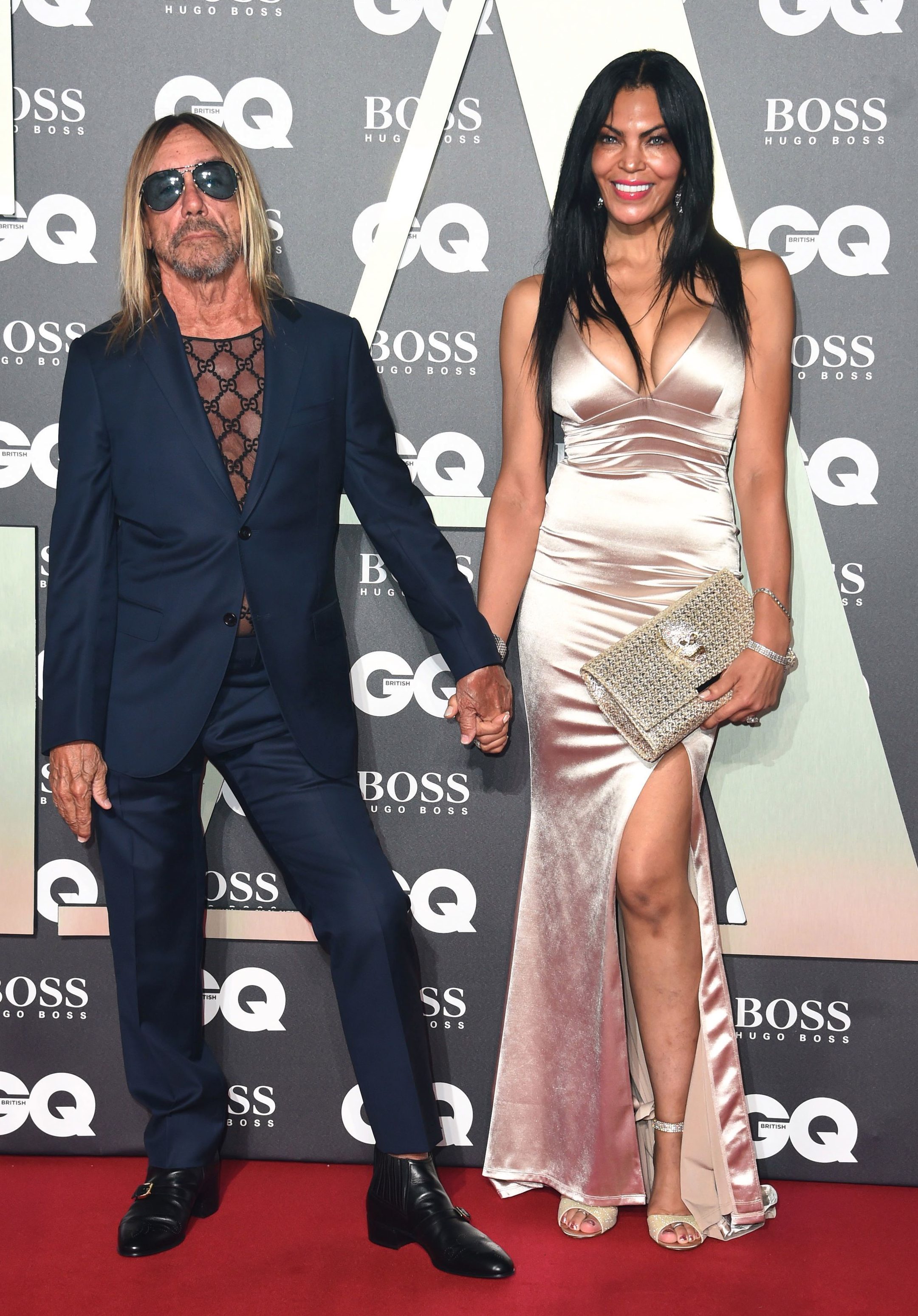 “I didn’t like those groups who came through all ‘neatsy’. They play their hit and everybody applauds and they go home and have a nice dinner. That has never appealed to me.”

At this point, Iggy assesses his highly individual trajectory and says: “If I consider that adulthood began at 18, then I really took a haymaker’s swing at things for ten or 12 years until I was about 30.

“I had nothing but my attitude to back me up. I had no wherewithal, no sales, not much popularity.

“Once I didn’t die at Christ’s age, I worked out what I had to do to keep going. Problem areas, unhappy areas, simply needed to be papered over.” 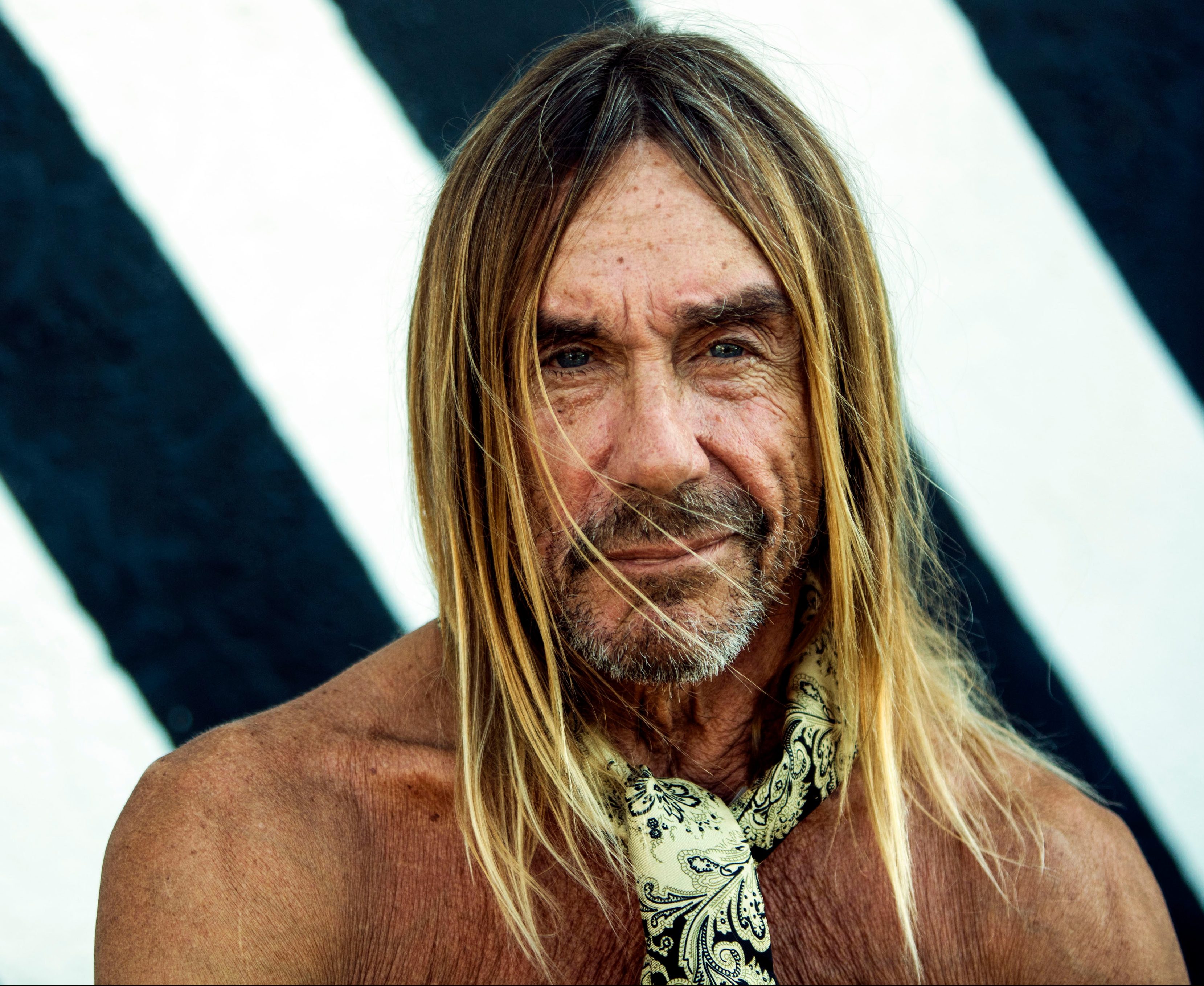 In 2016, one of the pinnacles of Iggy’s life in music arrived with Post Pop Depression, an album made in the company of Josh Homme and Dean Fertita of Queens Of The Stone Age and Arctic Monkeys’ drummer Matt Helders.

The term “supergroup” was applied, an overused term in Iggy’s view. “But I was playing with people who all sell more records and tickets than me,” he admits.

“It was incumbent on me to hold up my end, and I did. Neither the album or the tour could have succeeded if they weren’t any good.”

'I'VE ALWAYS HAD A PROBLEM SLEEPING'

Having his best-ever chart positions on both sides of the Atlantic had a strange effect on Iggy. He developed a burning desire to do his own thing again, to be free from artistic constraint.

He thought about “selling everything and going to Paraguay or somewhere.

“I got to the point where I thought, ‘I’ve fought society to a draw but I still don’t feel quite on top of it. I’ve got enough loot in my bag, why don’t I just leave? Why not do a runner?’” 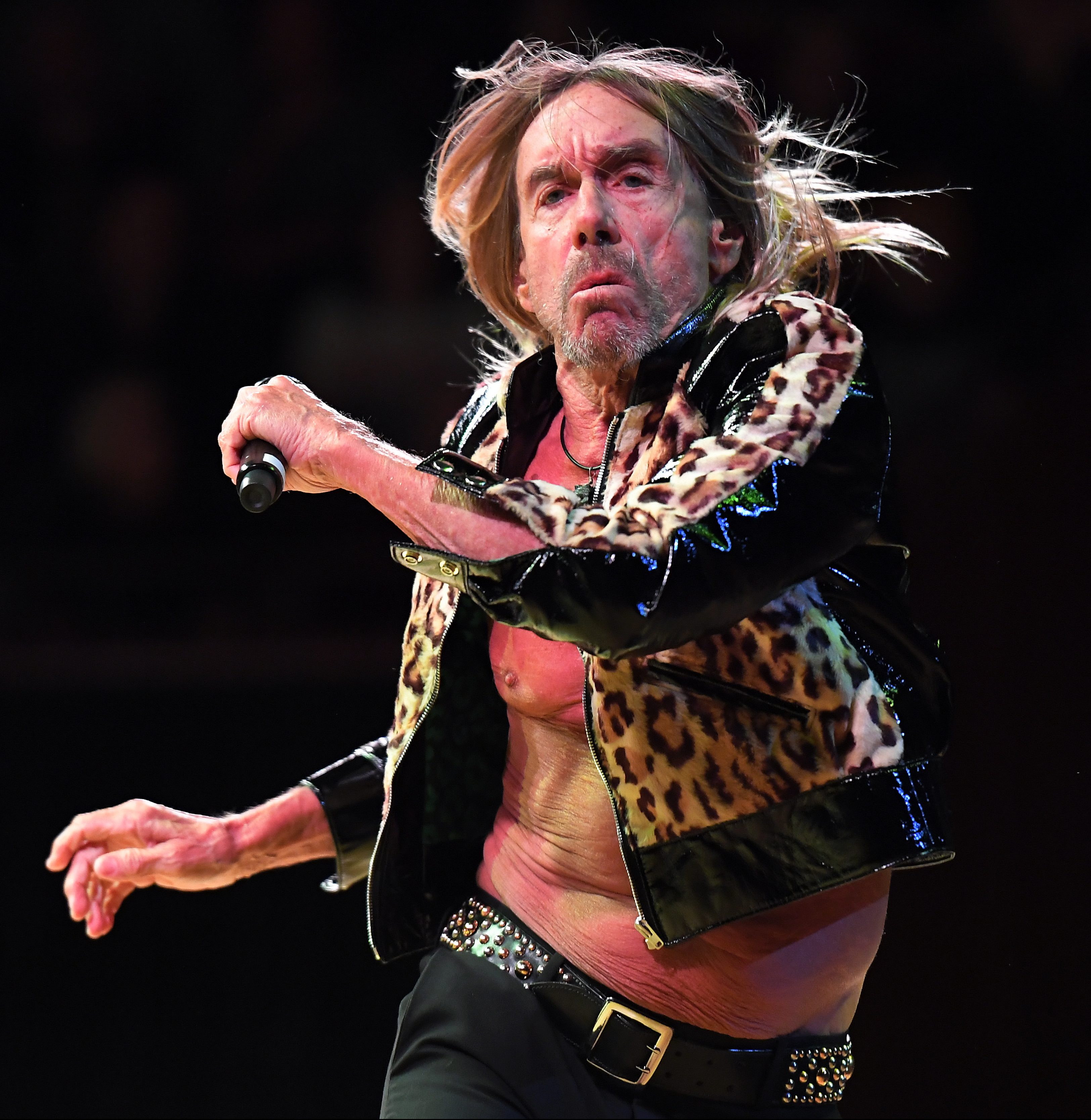 Of course he stayed put in Miami with his open-top Rolls Royce but this explains why new album, Free, opens with the short, ambient title track and its simple spoken lyric — “I wanna be free”.

His yearning for what he calls “the great unknown” was eased by making music with exciting, experimental, less well-known musicians of the sort he features on his BBC 6 Music show Iggy Confidential.

The ten tracks are filled with the silky, seductive horn-playing of Leron Thomas and the textured “guitarscapes” of Noveller (Sarah Lipstate).

“I was feeling as if I’d achieved quite a bit on the outside but I wanted more on the inside,” he explains. “When I say ‘I wanna be free’ for the first time, there’s an edge of desperation. The second time, there’s resolve.”

Keith Richards says: 'I do this (music) for me first.' I have a lot of that in me too. That’s why I like him

“I’m a little machine,” he says. “I’m afraid of who I’d be if I couldn’t carry on but I like the possibility of something more adventurous than anything I’ve done before.”

Free is one of four spoken-word tracks. Another is The Dawn, which closes the album.

'I HATE PEEING IN THE MIDDLE OF THE NIGHT'

“I’ve always had problems getting an entire night’s sleep,” says Iggy. “I almost never have in my life. Far too often, I’m awake before the dawn and I don’t enjoy that. On the other hand, I get a lot done and the mind is clearer.” 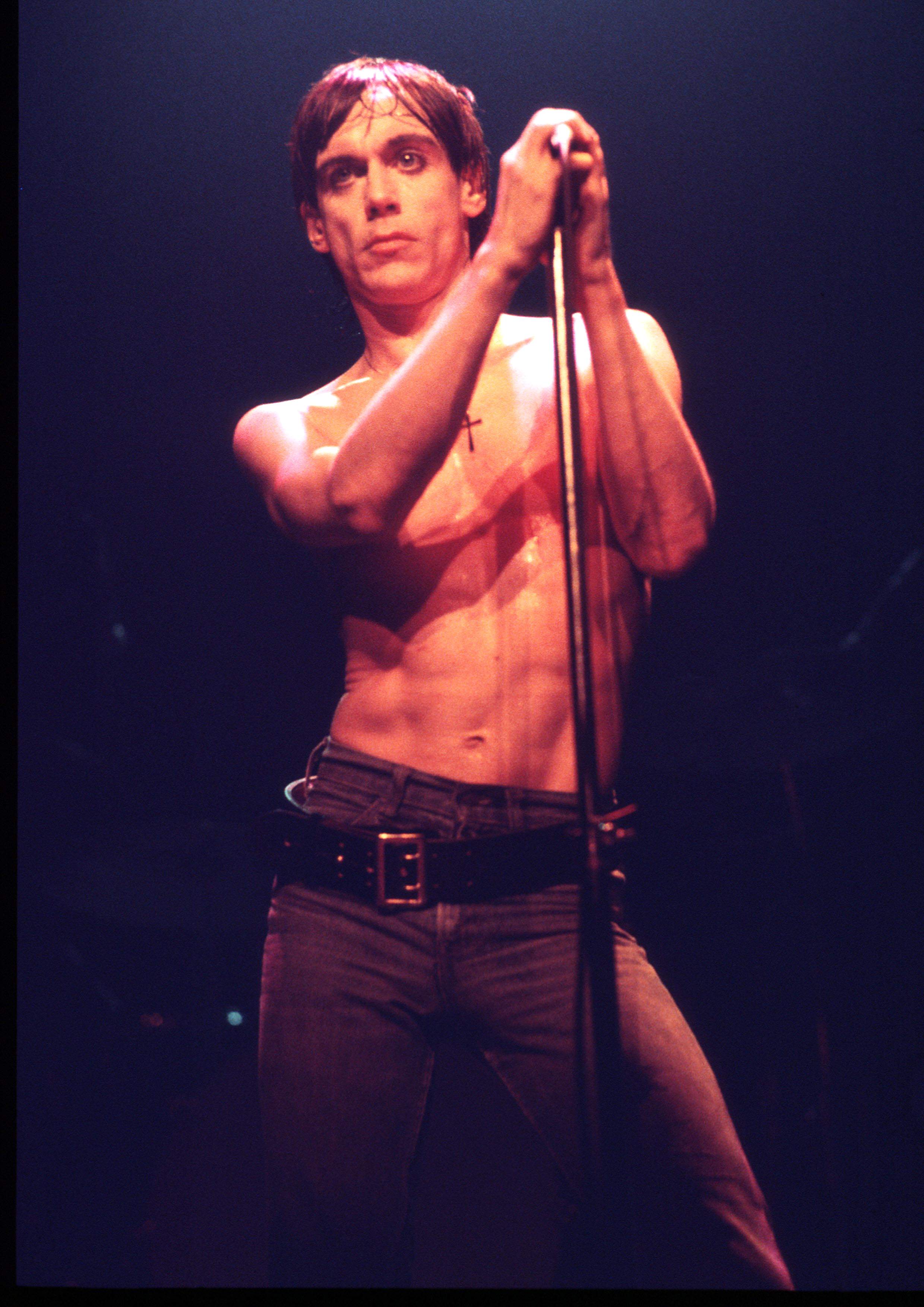 The Dawn began life as a short film for French television in which Iggy portrays a painter horrified when one day the sun doesn’t rise.

The album version, included in his enthralling career-spanning new lyric and picture book ’Til Wrong Feels Right (out Sept 26), contains a line that people of a certain age will identify with.

“I hate peeing in the middle of the night/But that’s how things are at this point.”

If Loves Missing is the album’s most conventional rock song, still classic Iggy mind, the sombre mood is lifted by the gender-blurring of a male chauvinist institution, James Bond, and the foul-mouthed Dirty Sanchez. 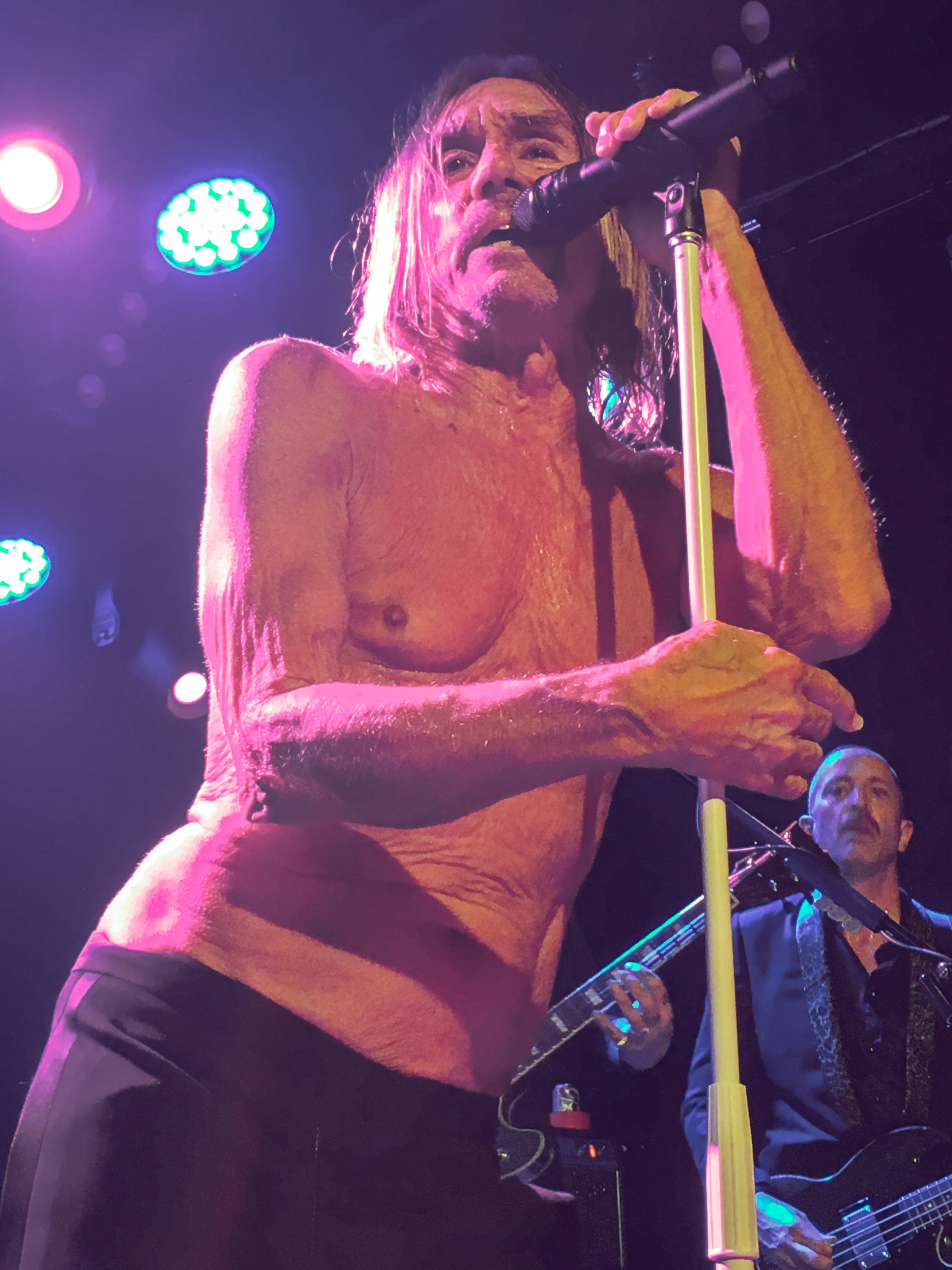 But it’s another of Iggy Pop’s momentous readings that we finish on, Dylan Thomas’s Do Not Go Gentle Into That Good Night.

It was written by the Welsh poet to his ageing father, imploring him to “rage, rage against the dying of the light”.

“The part I had trouble getting out of my mouth was the last stanza addressing the father,” says Iggy, whose own dad was a high school teacher and baseball coach.

“I had a lot of love and respect for my father and I never felt I was as good a man as him,” he confesses.

Based on his wild reputation, you can imagine bare-chested Iggy raging and raging against the dying of the light himself.

But, as this genial man stresses: “It’s just an image.” 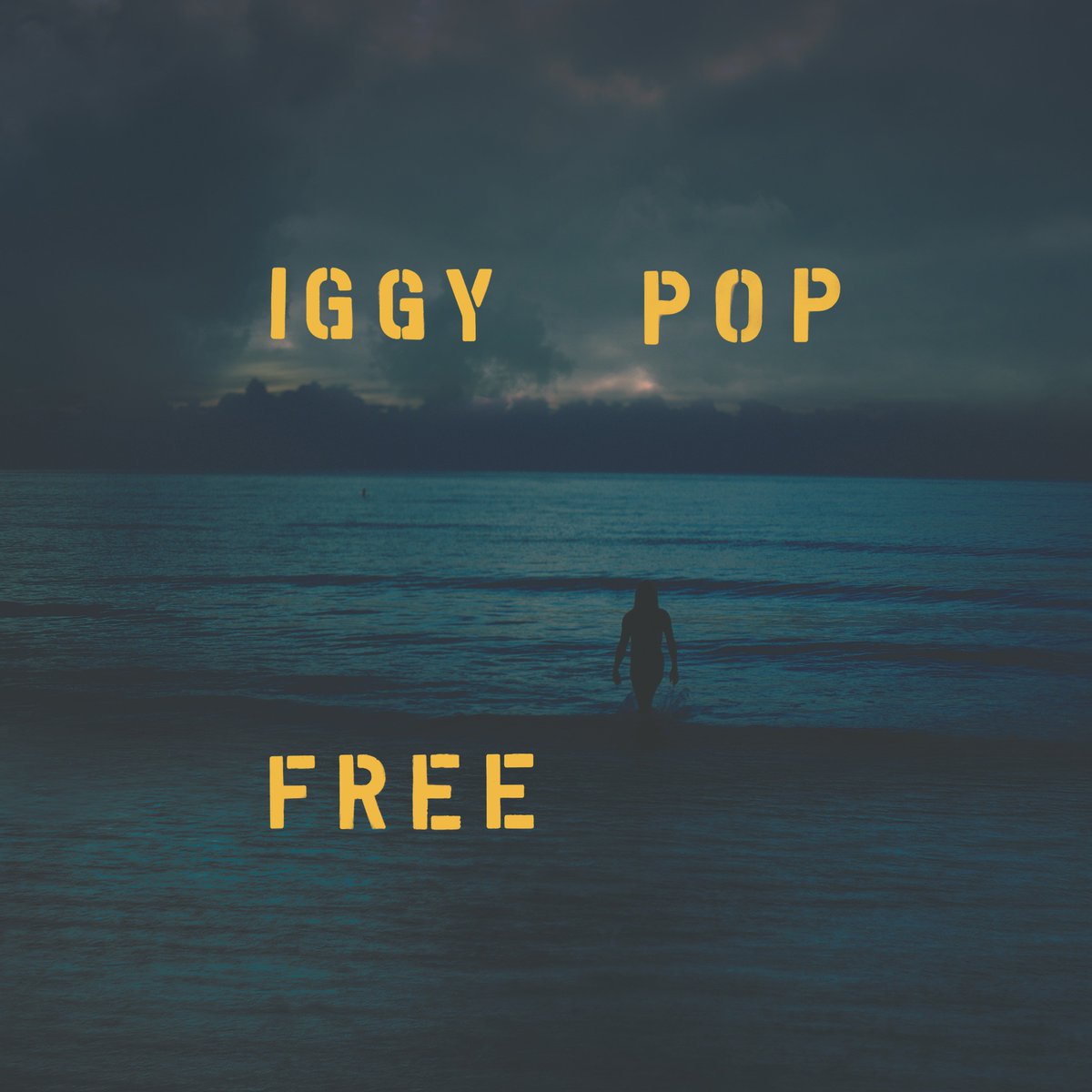