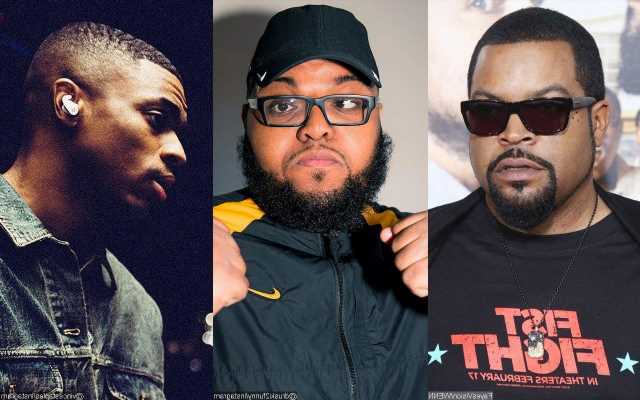 A Twitter user, who made false rumors about the movie, later admits to ‘spreading misinformation’ after the ‘AmeriKKKa’s Most Wanted’ artist reacts to his/her post.

AceShowbiz –Ice Cube has responded to a recent report about “Friday”. Having come across an article suggesting that Druski and Vince Staples will star in the movie prequel, the “AmeriKKKa’s Most Wanted” artist described it as a “blasphemy.”

On Monday, September 21, a Twitter user named @OhThatMarco posted, “A ‘Friday’ prequel is in the works for HBO max. Comedian druski and rapper Vince Staples are attached the lead roles.” In a follow-up tweet, the user wrote, “O’Shea Jackson Jr. the writer of the script says the Movie will go into production this sometime summer.”

The post did not go unnoticed by Cube. Shutting down the claim, the hip-hop icon quote-retweeted it and penned, “This is blasphemy.” It prompted the original user to write in another post, “Twitter is all about lying, joking and spreading misinformation.”

“Friday” fans might be disappointed since there will be no “Friday” reboot in the future. The Wall Street Journal reported last year that disputes between Cube and Warner Bros. prompted plans for the franchise’s fourth movie, “Last Friday”, to be scrapped.

According to the outlet, Warner Bros. executives “told him prison isn’t funny.” They also “felt the fans of the franchise wanted to see the characters in their familiar settings instead of behind bars for much of the movie.”

Cube’s lawyer begged to differ, suggesting that his movies have been “habitually underfunded in comparison with projects featuring white casts and creative teams.” The lawyer also suggested that there was discrimination. However, the studio denied the allegations, noting that both accusations are “grounded in a libelous set of knowing falsehoods.”

“We strongly disagree with any claims of discriminatory treatment, and stand by our ongoing and proven commitment to support diverse voices and storytellers and will continue to do so as we move forward,” a spokesman for Warner Bros. told the outlet.