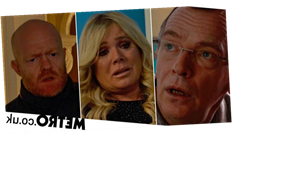 Ian Beale (Adam Woodyatt) was left in shock in EastEnders tonight (January 15), as Max Branning (Jake Wood) revealed that he believes Sharon (Letitia Dean) is trying to kill him.

Ian has been feeling incredibly unwell as of late, and he’s started to become really worried about his health.

Viewers know that Sharon has been poisoning him as she holds him personally responsible for Dennis Rickman’s (Bleu Landau) demise.

Ian made an appointment with the doctors, and Sharon worried when the doctor revealed his intention to order blood tests.

Determined to sort the problem, Sharon rang the doctor’s back and postponed the blood tests — making up an excuse about how she and Ian were heading off on honeymoon.

However, Max overheard the call, and this — coupled with the fact that Sharon has been preventing Ian’s family from visiting him — left his suspicions piqued.

When Sharon had her back turned, Max made his way upstairs to confront Ian, and subsequently revealed that he believes Sharon is trying to kill him.

Ian refused to believe such a thing, but when Max provided him with several arguments as to why his claim made sense, the landlord was left in doubt.

Has Ian come to realise that Sharon is trying to poison him?

A new trailer previewed the events of next week, and one scene in particular appears to suggest that Ian does in fact suspect his wife’s motives, as she serves him up a dinner.

EastEnders continues Monday January 18 at 8:05pm on BBC One.