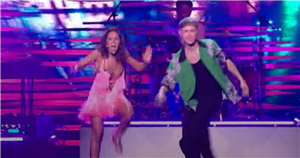 HRVY and Janette Manrara made a surprise reunion at the National Television Awards on Thursday as the Strictly Come Dancing professional came out on stage to dance alongside her former partner.

As the NTAs kicked off with a performance from HRVY singing Runaway With It to the crowd, nobody was expecting his former partner Janette to run out on stage and join him.

When Janette made her way onto the stage, fans went wild on Twitter, with one saying: “HARVEY AND JANETTE OH MY GOD.”

A second tweeted: “THAT DANCE WITH JANETTE OMDS I DID NOT EXPECT THAY PLS @HRVY”

A third chimed in: “@hrvy you were amazing!!! Seeing Janette dancing with u again was such a surprise!!!”

While a fourth complimented: “Brilliant – such talent and with lovely janette, still got the moves HRVY.”

Janette and HRVY wowed fans with their time on Strictly Come Dancing.

Writing in his OK! column, HRVY previously opened up about their professional relationship and said: “Janette and I are great friends and that’s really important, especially as we can’t really see anyone else because of the lockdown and being in our own bubble.

"We click as people so when we rehearse we keep going. We have a balance of us having a laugh but also she tells me when I’m going wrong.”

The pair's friendship shone through during the series but the pair ultimately didn’t manage to win the season, losing to Bill Bailey and parter Oti Mabuse.

HRVY said last year: “Janette really had to help me through last week. I was so in my own head about everything. I was so nervous and I wasn’t enjoying it at all.

"Being in such a negative headspace just made me want to give up. But Janette was like a counsellor and gave me so much confidence.”

Janette has since left Strictly in order to take over hosting duty on the spin off series It Takes Two.

Speaking on The Monday Mile podcast about her final dance with HRVY on the show, Janette said: “It was the last one I danced to with HRVY on Strictly, so right before we danced it, I had this gut feeling, like, ‘If this is my last one, I’m going to go out happy as heck’ because it was perfect.

“He danced it perfect, the song meant so much to me. We looked epic in those gold sequin tuxedos.

“I couldn’t have asked for a better last dance. I kind of felt that funny feeling like, ‘If this is the last one, I’m cool’. It was so emotional and epic,”

For the latest NTA and Strictly news, sign up to OK!'s daily newsletter.