In “1917,” Sam Mendes depicted the experience of fighting in the trenches of World War I as a tour de force thriller. Viewing the conflict from the opposite side — and through the lens of a classic anti-war novel — Edward Berger’s acclaimed “All Quiet on the Western Front” brings to mind a different genre. The sheer scope of the unrelenting artillery attacks and massive carnage in Germany’s submission for the Best International Feature Oscar paint The Great War like an immersive horror film. Thanks to the brilliant work of cinematographer James Friend (“Willow” and “Star Wars: The Acolyte”), we’re right beside Paul (Felix Kammerer) in the harrowing days leading to the Armistice of Compiègne.

“We always associate horror to supernatural when it comes to cinema,” Friend told IndieWire. “But we actually had a foundation to build upon it with war. I think that’s really poignant and very truthful for our generation [in Europe] that hasn’t really lived through much war, except for what’s going on in [Ukraine].”

The key was shooting large format with an array of cameras for different purposes. The Alexa 65 was the primary camera on the battlefield following the action; the Alexa Mini LF snaked its way through the long and narrow trenches; the Sony Venice captured nighttime shots with flares; and the RED was the kamikaze camera for FX explosions that were comp’d into the background in post.

“The Alexa 65 is a beast image wise and physically,” Friend said, “but it records an extremely wide field of view. So when you’re doing a war picture, you need to bolster the image with that and put the cast and the audience through hell. Then we had to move the camera seamlessly through the trenches and for that we used the Alexa mini LF with stabilized gimbal (with the Stabileye) and with crane work. Also because of the smaller sensor, it worked better for action because of better pan speeds. We wanted to try and draw a documentary perception of the image.” 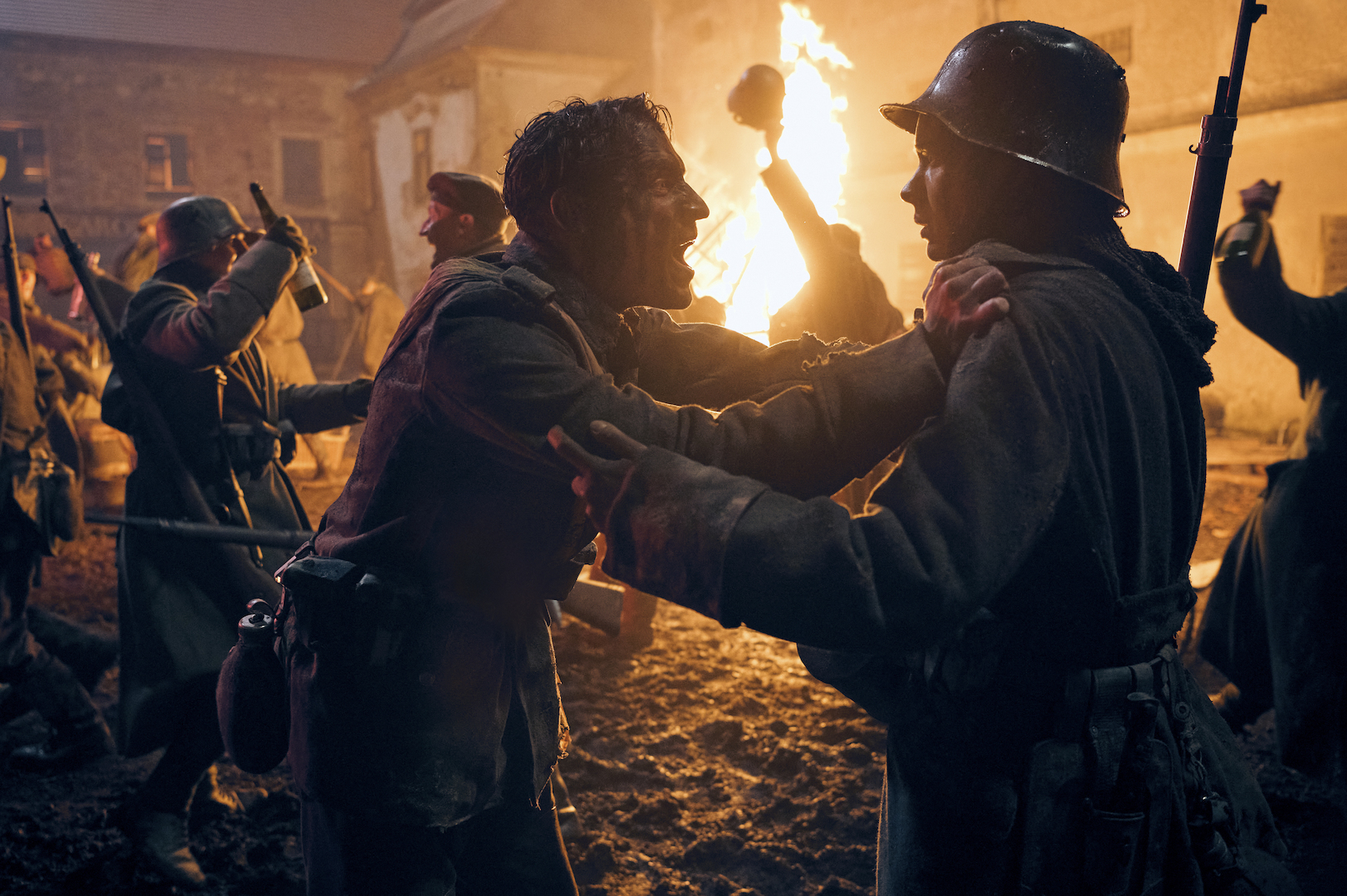 “All Quiet on the Western Front”

Shooting at night, meanwhile, proved quite the undertaking to look natural and unlit. “The Sony Venice gave us more flexibility with the image and opened up a lot faster,” Friend continued. “And we were quite adamant about shooting explosions on the battlefield, and the RED gave us great resolution with this lo-fi solution. We also buried the RED in the floor so we could run it over with a tank. But it was my camera.”

The film opens with a bravura attack, as the Alexa Mini LF moves through the muddy trench on a Steadicam; then the Technocrane lifts up and over, and the hectic German advance is now captured by the Alexa 65, with random bodies falling all around as a result of the French assault. Later, when Paul runs for his life, the Alexa 65 follows his fall into a mud crater, which symbolizes his lowest point and the total futility of the German cause. What’s noteworthy is the seamless transition from one large format camera to another. 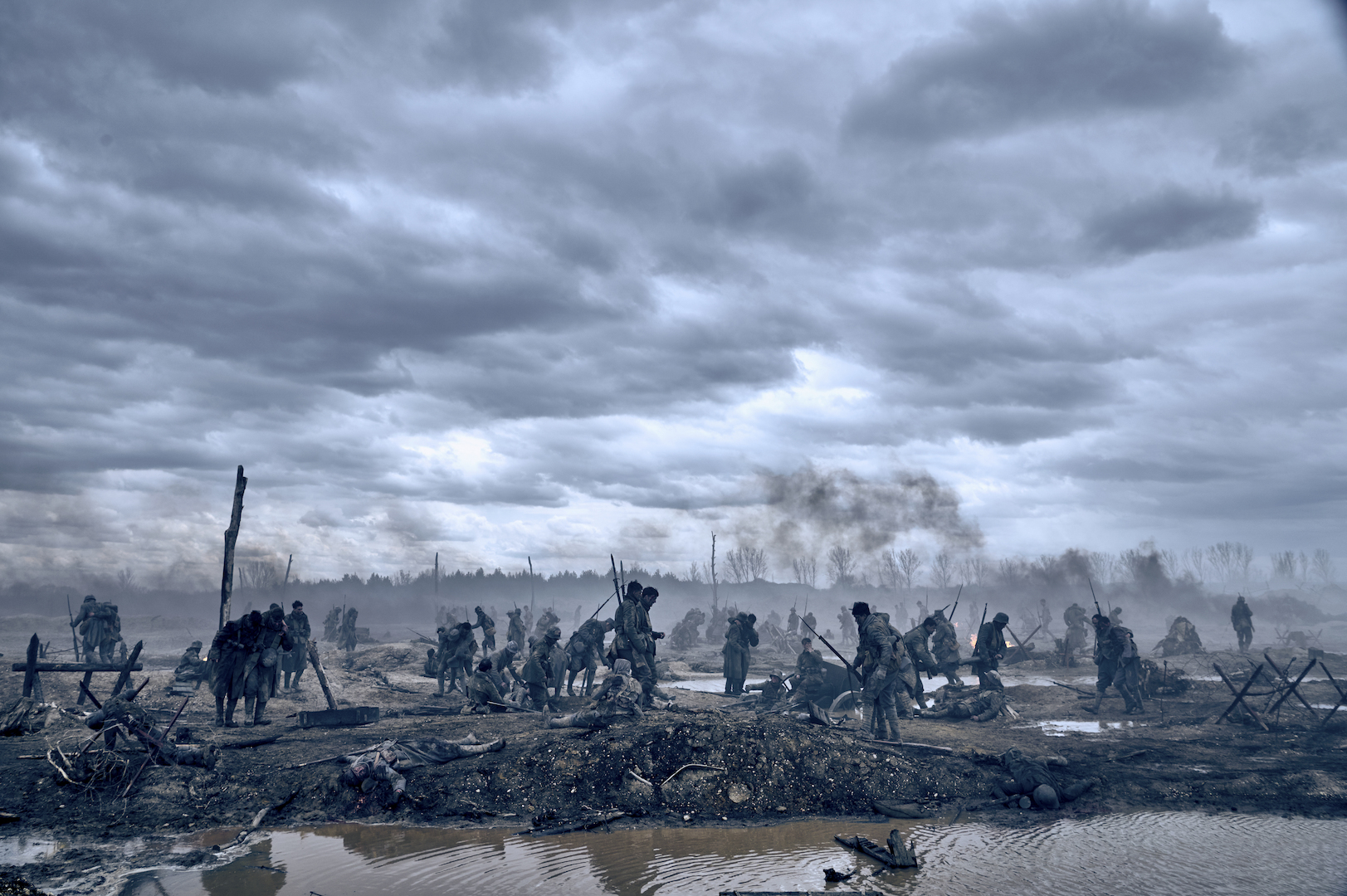 “All Quiet on the Western Front”

The location of the trenches and battlefield was also vital. Production designer Christian Goldbeck found a former airport in the Czech Republic that proved ideal for size, distance, and topography at 650 meters long, especially with Friend shooting many shots without cutting. It was advantageous for the German perspective: The sun rose from the French side and set on the German side. They planned their shots, fully storyboarded, so they could shoot all through the day against the light.

The color palette helped convey the journey from winter to spring, beginning with a blueish hue to emphasize the frost in the beginning. “Then, as we follow the uniforms into the spring, we saw a slightly more hopeful, almost childlike section of the world, where everything is clean and beautiful,” added Friend, who embraced natural light that was often overcast and backlit.

“And there’s a beautiful shot of Kropp [Aaron Hilmer] when he sits against the gate of the farm at the end, and this wonderful snow came down,” the cinematographer added. “We retrofitted all the rest of the scenes from that [with fake snow] because we didn’t want to let that image go.” This seasonal approach ultimately provided an atmosphere for understanding what was going on in the soldiers’ minds and how they perceived the world.”