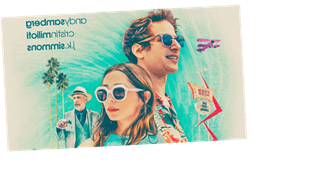 Groundhog Day really hasn’t had that many imitators over the years–there’s the slasher version, Happy Death Day, and the action sci-fi take, Edge of Tomorrow. Netflix’s Russian Doll tackled time loops for the hipster crowd. And that’s pretty much it. But somehow–appropriately, for the genre’s tropes–it can sometimes feel like time loop movies have been “done” already. What more could a filmmaker add this specific time travel subgenre that Groundhog Day and its existing descendants haven’t already accomplished?

Enter Palm Springs. When writer Andy Siara and director Max Barbakow set out to make a movie half a decade ago, they didn’t have a time loop in mind. After a weekend of bonding in Palm Springs, they had the kernel of a character: Nyles, a nihilistic slacker who would wind up being played by Andy Samberg. As they fleshed Nyles out and discovered who he is, they hit on the perfect scenario that would challenge him as a person. And that’s where the Groundhog Day aspect came from, Siara told GameSpot during a recent interview with the filmmakers.

As we pointed out in our review, Palm Springs goes one step further than Groundhog Day ever did; by the time we meet up with Nyles, he’s already been stuck in the loop for an indeterminate amount of time. Like Bill Murray’s character Phil Connors in Groundhog Day, he’s seen and done it all. But unlike Phil Connors, Nyles is still stuck there anyway.

Regardless of how many time loop movies actually exist, the genre can feel played out, simply because Groundhog Day is already basically perfect. By starting with the characters and designing a situation that would best challenge them–a time loop that truly won’t end, no matter how many life lessons Nyles feels he’s learned–Siara and Barbakow hoped to sidestep that issue. It’s a simple, but effective, twist on the formula.

“Once you know you’re doing a time loop movie, the precedent and the quality is enormous, and the stories being told there are evergreen,” Barbakow told GameSpot. “So it’s about doing something new, and staying as far away as possible from the really good stuff.”

There’s one other wrinkle we haven’t mentioned yet: Nyles isn’t the only person stuck in the loop. Although the movie centers on Nyles, Cristin Milioti’s Sarah faces the same dilemma.

“[Milioti] never does the same thing twice, is completely fearless, magnetic, so, so talented, and has this air of mystery, I think because she’s so protean in all the work that she’s done, and so dynamic,” Barbakow said. “She’s the mystery when she comes into the movie, and she’s showing this new side of herself as a performer as well.”

It wouldn’t be a time loop comedy without a montage in the middle of all the crazy hijinks the characters get up to in a world without consequences, and Palm Springs doesn’t fail to deliver the goods. Given how funny Samberg and Milioti are, it’s easily the highlight of the movie. Siara and Barbakow shared some ideas that didn’t make it in, including “a skydiving sequence” (would you jump out of a plane without a parachute if you knew you couldn’t die?) as well as “a whole casino scene” that Barbakow said was “based on the experience that Andy [Siara] and I had at Agua Caliente Casino, where I managed to piss off an entire table of grizzled blackjack players.”

“Turns out it’s pretty expensive to shoot at a Casino,” Siara added.

Palm Springs arrives on Hulu (and in some drive-in theaters) July 10, but it first premiered at Sundance in January, where the streaming service (along with distributor Neon) quickly bought it up, breaking the previous record by an extremely deliberate 69 cents. Of course, movies that deserve to be in theaters going straight to streaming services instead has become an everyday occurrence in the age of COVID, which makes Palm Springs ahead of its time (ha) by a few months.

“Distribution and exhibition, I think it’s constantly evolving,” Barbakow noted. “I loved the deal that we made [at Sundance] for the mere fact that it felt forward thinking–we were dealing with the theatrical distributor and the streamer, which I think is a very smart way to go about things, because that’s just the reality of how we consume content.”

It’s certainly the reality in which we’re living now, and we’re lucky that content includes movies as fun and endearing as Palm Springs. Look forward to watching it July 10.