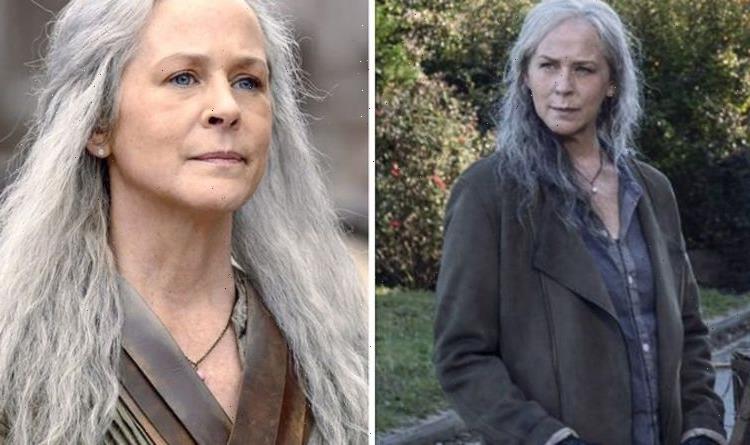 The Walking Dead has returned to AMC for its 11th season and the survivors face a number of new threats. Fans are keen to learn how each characters’ story will end, but the fates of Carol (played by Melissa McBride) and Daryl Dixon (Norman Reedus) are already known. They will be starring in their own spin-off series and fans are keen to know how long Carol has been around.

The Walking Dead is back with season 11 and the final instalment is full of suspenseful twists and turns.

The attention is on the return of a vengeful Maggie Rhee (Lauren Cohan) as she comes face to face with old enemy Negan (Jeffrey Dean Morgan).

In the previous season, Carol shocked fans when she revealed she had been secretly working alongside Negan to bring Alpha (Samantha Morton) down.

Negan returned to her, carrying the decapitated head of the season’s main antagonist, and Carol commented on how long it had taken Negan to kill her.

How old is Carol in The Walking Dead?

Carol is a natural-born leader and survivor, which has led fans to question her age.

They may be surprised to hear that in the original comics by Robert Kirkman, she is a 25-year-old housewife.

The TV show differs when it comes to Carol’s age, which is most likely closer to actress McBride’s real age of 56.

The series has been going for 11 years, so in season one she is likely to have been about 45 years old.

The Wiki Fandom page for the character cites her as being in her late 40s to early 50s.

Ahead of the final season, fans may have been concerned for Carol’s fate as she continues to age.

However, it was announced she would be starring alongside Daryl in a spin-off series, due to air in 2023.

Speaking to E! News about the spin-off, McBride said: “I haven’t really heard anything just because we’re blowing out this final season and it is a big one.

“So I mean, it’s just so far ahead of us that we’re just not talking about it much.”

With this in mind, it seems she is focussing on the original show’s final season for the time being.

She also commented on what fans can expect from the show’s finale, saying it has a very different tone from previous seasons.

In an interview with TV Line, she said: “At first they [Daryl and Carol] always try to mend their relationship and rebuild trust.

“I think they’ve come to terms with everything they’ve been through, but they still need to find that connection they had.

“Carol sort of has her tail between her legs, but she’s determined to make their relationship work.”

She may struggle to get through to Daryl on an emotional level as he has been through a lot during his time away from the group.

He started to form a bond with survivor Leah (Lynn Collins), but she disappeared on him and he could not help but feel a sense of rejection.

As a result, he could shut himself off from Carol as he does not want to get hurt by someone else he cares for.

Fans have taken to Twitter to share their thoughts on Carol’s journey, with one saying: “I finally caught up on The Walking Dead and it’s hurting my heart Daryl and Carol aren’t cool.”

A third said: “I started watching the walking dead again and man, Carol is so awesome. There isn’t a single line where I don’t align with her. Such a great character.”

The Walking Dead season 11 airs on Sundays on AMC and Mondays on Disney Plus.