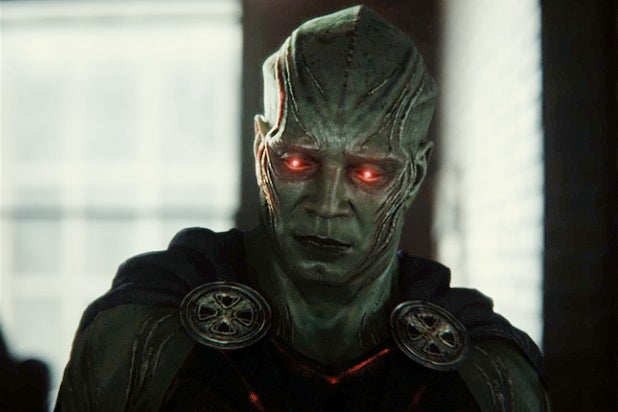 (You’ll find some spoilers below for “Zack Snyder’s Justice League,” but only for things related to Martian Manhunter’s appearances, which have no bearing on the main plot)

For regular folks who sit down and watch “Zack Snyder’s Justice League” — as in, not die-hard fans of DC Comics — there’s one brand-new character in the Snyder Cut that will no doubt cause some confusion: That weird shapeshifting green guy who disguised himself as Martha Kent for a scene with Lois Lane, and then had a weird chat with Batman at the end. His name is J’onn J’onzz, but he’s better known as the Martian Manhunter.

While almost all of “Zack Snyder’s Justice League” was built from footage that Snyder shot when the film was originally in production in 2016 and 2017, there were two major additions: Another vision of an apocalyptic future for Batman, and Harry Lennix as Martian Manhunter. These bits were shot specifically for this HBO Max release.

Snyder has been teasing Martian Manhunter since 2019, when he shared on the obscure social network Vero what he said were his old storyboards for one of Martian Manhunter’s two Snyder Cut scenes — the one in which Martha Kent and Lois Lane have a heartfelt conversation, but then it turns out that Martha was actually J’onn J’onzz in disguise. The part with Martha and Lois is definitely footage from before, but Martian Manhunter’s part was filmed last year.

After he dropped his storyboards on Vero, Snyder said that he left the production in 2017 before he was able to shoot Lennix’s part in that scene, but that Martian Manhunter was always part of the plan.

Speaking with TheWrap, multiple individuals with knowledge of the original production disagree with that claim. They say that Martian Manhunter was never part of the plan for “Justice League,” in the script phase or otherwise. They also said Lennix was never booked to film any scenes on the movie, and that Snyder came up with this idea to have Lennix as  at some point after Joss Whedon took over the film in May of 2017.

Snyder actually first touched the subject of Martian Manhunter appearing in “Justice League” in 2018 — again on Vero — in response to a fan theory about Swanwick secretly being J’onn J’onzz. But if he had those storyboards at that point, he held onto them. In response to the theory, he said simply, “We love that idea.”

One of TheWrap’s insiders believes that Snyder adopted the fan theory and ran with it to encourage the #ReleaseTheSnyderCut campaign, which if true would mean that “Zack Snyder’s Justice League” features a fan theory brought to life.

Representatives for WarnerMedia and Snyder didn’t respond to requests for comment from TheWrap. But according to the film’s press notes, Snyder only shot one new scene — Batman’s new vision of the future, with Jared Leto’s Joker. That doesn’t mean that literally nothing else in the Snyder cut was newly produced in 2020. It just means that they’re saying the new Knightmare sequence is the only completely new scene that they shot.

However, the scene at the end of “Zack Snyder’s Justice League” in which J’onn J’onzz visits Bruce Wayne appears to be, if not entirely new, at least mostly new. Affleck is noticeably slimmer in that scene, missing the extra muscle he had previously put on for the role. So it’s tough to imagine we’re looking at Affleck in 2016-2017 there.

Plus, again, Snyder did not shoot any scenes with Lennix prior to leaving the film the first time around. So it’s not clear what part of this scene had already been shot. It could be that they originally had a completely different scene planned for Affleck at his lake house to end “Justice League” that was similar enough that they’re considering this as more of a replacement scene than something totally new.

You see stuff like that fairly often if you compare “Zack Snyder’s Justice League” to the theatrical cut. For example, both movies have a scene where our heroes stand around a table in the Batcave and talk about trying to use the Mother Box to resurrect Superman. But while the two versions of the scene serve the exact same function in the plot, they are, in fact, completely different and share none of the same dialogue.

There are possibilities for how Martian Manhunter came to be in “Zack Snyder’s Justice League” that don’t involve Snyder moving on a fan theory. For one, it could be that Snyder had Martian Manhunter in mind as something he’d want to tackle down the line but had not yet made any push to have the character brought into the DC movieverse.

It makes sense that Snyder would have been at least considering Martian Manhunter, because “Justice League” elevated the DC shared universe to a cosmic level with space alien bad guys Steppenwolf and Darkseid. Alien heroes were sure to follow, and J’onn J’onzz is one of many possibilities that could fit that bill since his comic book story had him living on Earth. Plus, if it was something he really had long wanted to do, then it follows that Snyder would think he might as well just go for it.

As the name implies, the Martian Manhunter is originally from Mars. He’s an ancient character, old enough to have been alive when Mars was a habitable planet — but he’s been living on Earth, in secret, for a million years.

This character had, partially, been featured in both “Man of Steel” and “Batman v Superman.” We say “partially” because in those films Lennix was playing General Swanwick, the military guy who keeps having to deal with super-powered alien threats. There was never any hint whatsoever that Swanwick was secretly J’onn J’onzz the whole time.

That lack of foreshadowing includes “Zack Snyder’s Justice League” itself. Aside from those two scenes, Martian Manhunter is a total afterthought. He does not participate in the plot at all, and his screen time is so brief that we certainly don’t get to know him on any level. It’s awkward to have him pop up at the end and tell Batman he’s ready to fight for Earth because, well, who even is this guy?

But that’s the very last scene in the movie. For better or worse, Martian Manhunter is going to be the thing people are thinking about once the movie ends.