The Dance of Dragons has officially begun.

Sunday’s “House of the Dragon” finale pitted Rhaenyra Targaryen (Emma D’Arcy) against half-brother Aegon (Tom Glynn-Carney), who has been declared king of Westeros despite the late Viserys’ wishes (Paddy Considine). As Rhaenyra prepares to win back the seven kingdoms, she sends son Lucerys (Elliot Grihault) to Storm’s End to appeal to Lord Borros Baratheon (Roger Evans), where he finds a nasty surprise in the form of uncle Aegon’s brother Aemond (Ewan Mitchell). The sons of rival houses take to the sky, the dragons dance, and only one survives.

Just as Episode 9 focused on King’s Landing and Alicent’s (Olivia Cooke) family, Episode 10, “The Black Queen,” written by Ryan Condal and directed by Greg Yaitanes, unfolds primarily in Dragonstone, where Rhaenyra and Daemon (Matt Smith) establish their plan to move against the Greens with the help of key players on their own side. Rhaenys (Eve Best) arrives from King’s Landing, where she did not burn everyone to a crisp, leaving the actual warmongering to Rhaenyra, Aegon, and their immediate families.

But Rhaenys and husband Corlys (Steve Toussaint) can’t sit this one out. They’ve lost both children, never with a Targaryen too far out of sight, and their grandchildren are engaged to Rhaenyra’s sons, firmly enmeshed in the Black side of the war. The slow, tactical moves of the Sea Snake and the Queen Who Never Was will be critical to this war, and already are; if Aemond had died in the dragon pit of King’s Landing by Rhaenys’ command, he wouldn’t have journeyed to Storm’s End at all. 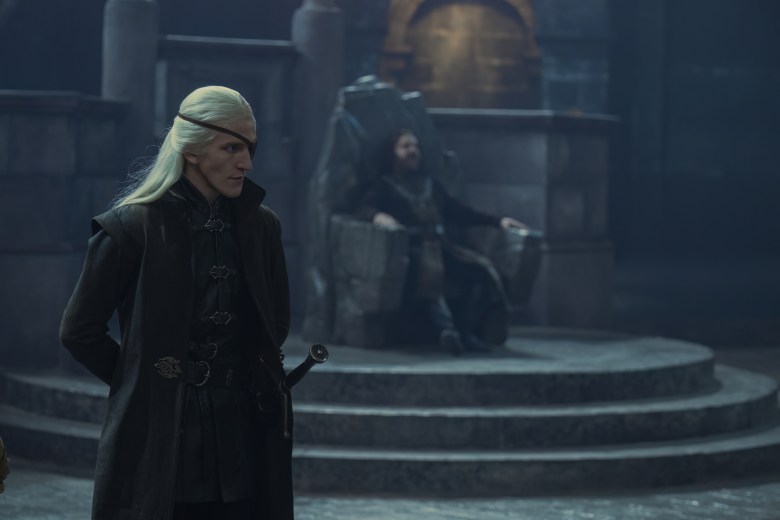 Ewan Mitchell in “House of the Dragon”

As relations strained between Alicent and Rhaenyra over the years, they had the thin but undeniable connection of their love for King Viserys. With the good king gone, Alicent sends father Otto (Rhys Ifans) to appeal to Rhaenyra’s fondness for their old friendship — a fondness that has fully evaporated by the episode’s final moments. Alicent and Rhaenyra’s children may have played together as their mothers once did, but the bonds between Jacaerys, Lucerys, Aegon, and Aemond severed when one of them brought a knife to a fistfight and turned the other into a sapphire-sporting psychopath. Even if the opposing queens brokered peace, their sons would carry that enmity forever, endangering the realm regardless.

So strong is the hatred between their families that Aemond — who does not think his brother fit to be king in any manner — demands that Luke bend the knee for Aegon. He knows it’s futile, but will settle for an eye to even the score between them, which Luke politely declines. The entire Storm’s End buildup is uneasy, not even to foreshadow the tragedy ahead but to underscore just how unmatched Luke is on every level. Daemon may bluster about the might of dragons in one side against the other, but this isn’t sides so much as individuals. This prince, this 14-year-old boy, is doing the work of an adult, face-to-face with a skilled, vindictive swordsman who rides a gargantuan dragon, the largest in the world. No matter how many dragons Daemon coaxes to his mercy through song, each of them will have to measure up to Vhagar in battle, and their riders to Aemond.

Dismissed by Lord Borros, the sons of Green and Black take to their dragons and take to the skies, where a full-blown thunderstorm rages in the middle of the day. In “Game of Thrones” tradition, Aemond and Luke’s flight is pictured mostly in darkness or shadow, but Storm’s End is the rare sequence where this serves effectively serves the scene. The lack of visibility and poor conditions compound Luke’s stress as he and Arrax fly higher and higher, unable to see or hear Aemond and Vhagar, whose silhouette appears in a flash of lightning and a deeply satisfying shot.

And as with Episode 9, a pivotal moment departs from George R.R. Martin’s “Fire & Blood,” in which Aemond intentionally — proudly, even — attacks Lucerys in the sky. In “House of the Dragon,” Arrax and Vhagar take the reins, both moving against their riders’ wishes in the final moments of their fight. When they break through the clouds, Aemond urges “Vhagar, no!” before she fatally bites Arrax into pieces. As both dragon and boy fall from the sky, Aemond looks utterly, uncontrollably panicked. His motivation might differ from Martin’s text, but the result is the same: Aemond just killed a child, became a kinslayer, and pushed this war into dreadful, uncharted territory. It’s as if he can see Rhaenyra’s face, miles away, as she stares down the camera in the episode’s final shot; this woman has no love left for her old friend or anyone who supports her, and she will take back her throne with fire and blood.

“House of the Dragon” Season 1 is now streaming on HBO Max.