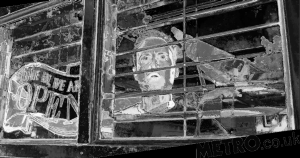 It’s become a bit of a Hollyoaks tradition to bring carnage and destruction to the village in the autumn and next months, the lives of villagers including Luke Morgan (Gary Lucy), Cindy Cunningham (Stephanie Waring) Mandy Richardson (Sarah Jayne Dunn) and Scott Drinkwell (Ross Adams) will be at huge risk as their world literally caves in straight after the truth about DJ’s paternity is exposed.

But will one of our beloved favourites die as danger rocks October once more?

Show boss Bryan Kirkwood revealed to Metro.co.uk: ‘October is huge for us – there’s two really exceptional weeks. We have the traditional stunt week where the sky falls in on the Hollyoaks residents. This year we do have a character refer to the fact that October is really unlucky around these parts! We had to finally nod to the audience – just moe or take a holiday in October, folks! So yes, we have our legacy artisits – Darren, Mandy, Luke, Cindy and Nancy all across October with the reveal of DJ’s paternity.

‘We have the newest love story in town in the shape of Mitchell and Scott/Anita and we have the exit of a much loved character. As always, it’s the pinnacle and the pay off of stories the audience have been waiting to see but equally, it’s the starting point of stories that are going to dominate next year the way that Tegan’s death was the launch pad for this year – that worked really well. If ever there was a character legacy, I think Tegan has given us so much in terms of motivating the Ste story this year.

‘We come at it from a more subtle angle. There are lines of dialogue this year which are buried – literally! These will be the little kick starters for big stories next year. You might not notice them at first but look out for them!’

But the drama doesn’t end there! He added: ‘What is exciting this year is that the stunt week follows directly into an equally brilliant week, with who shot Mercedes McQueen? It really is a big one and all of those terrible decisions that Mercedes has been making all year lead people to seek revenge – there are more than a few suspects, put it that way!

‘It’s a whodunnit but it won’t play out to an exhausting level – it will play out for a couple of months, keeping the audience guessing. Some of our most popular characters are in that line-up. What I’m really chuffed about is the consequences of the shooting keep on coming and it takes us into next year so it’s more than about revealing the culprit.’