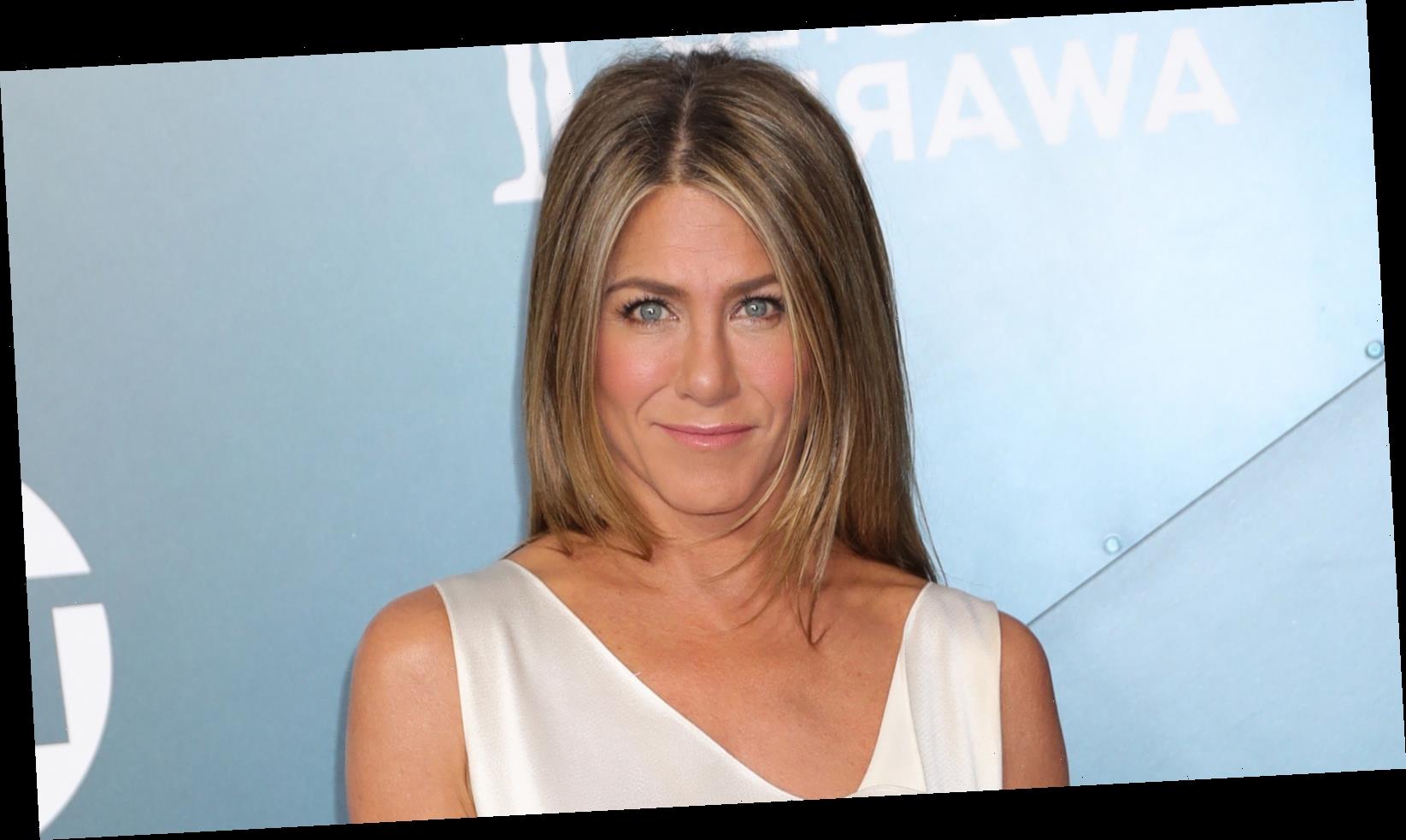 There’s no one quite like Jennifer Aniston in Hollywood. Not only will she forever be remembered as Rachel Greene in Friends, a role that scored her a Golden Globe in 2003, international fame, and her own signature haircut, but she’s since bolstered her career with comedic hits like Just Go With It, We’re the Millers, and Horrible Bosses.

Acting might be where Aniston shines, but that doesn’t mean you won’t see her face in other places. Considering she’s one of the most gorgeous actresses in Hollywood — she was named World’s Most Beautiful Woman by People in 2016 — and she’s just as hilarious as she seems, it’s not a total surprise to find out that some of her most bankable endeavors involve playing herself. Between her endorsements, investments, and product lines, Aniston has carved out a decent income completely separate from the screen.

According to Celebrity Net Worth, Jennifer Aniston has a net worth of $300 million. Outside of acting, here’s where all of that money comes from.

Jennifer Aniston's already one of the highest-paid actresses in Hollywood

As far as actresses go, Jennifer Aniston is one of the most commanding names in Hollywood. She was the fifth highest-paid actress in 2019, according to Forbes, taking home $28 million, and she’s landed on the annual list ever since the seventh season of Friends, per Celebrity Net Worth.

Speaking of the beloved sitcom, Aniston and her former castmates set all-time highs with their salaries during the show’s final seasons. According to Celebrity Net Worth, Aniston, as well as co-stars Courteney Cox, Matthew Perry, Lisa Kudrow, Matt LeBlanc, and David Schwimmer, were making $1 million an episode during Seasons 9 and 10. Over the hit series’ entire run, the outlet estimates each cast member made nearly $90 million from “base salary alone.” Wow.

Aniston could’ve taken the sitcom money, quit acting, and run, but she continued to bank off her success and her worth on set. With her big return to television in 2019’s The Morning Show on Apple TV+, she reportedly took home $1.25 million an episode, per The Hollywood Reporter.

Jennifer Aniston and her TV Friends clearly made bank from their time on the show, but they’re still doing pretty well thanks to its enduring success. Even more than 25 years after its premiere, WarnerMedia forked over $425 million to ensure the exclusive streaming rights for the show on HBO Max in 2019, per The Hollywood Reporter, and the sitcom’s timelessness has been the subject of plenty a thinkpiece.

According to USA Today, Friends continues to earn $1 billion a year in syndication for Warner Bros. After the lead cast’s salary renegotiations in 2000 (via Celebrity Net Worth), they’re all guaranteed two percent of the revenue, which means Aniston is taking home nearly $20 million a year in residuals without lifting a finger. Although Rachel Greene dealt with a long line of bad boyfriends before she found her happily ever after with Ross Geller on the show that made Aniston a household name, perhaps it’s just back pay for years of televised emotional distress!

Jennifer Aniston is the queen of endorsements

It’s clear that Jennifer Aniston knows the value of a good product and of her public approval. As of 2017, this celeb had endorsement deals with Aveeno, Emirates Airlines, and Smartwater, according to Forbes. She was also an ambassador for hair care brand Living Proof for years, and although they parted ways after Unilever purchased the brand in 2016 (via People), Forbes reports that the sale of Aniston’s stake in the company, which she had held since 2012, added a decent boost to her bank account.

So, what makes the Dumplin’ star such a bankable ambassador? According to Elle, a celebrity awareness database reported that 91 percent of people found Aniston “appealing” in 2018, and the only women to outscore her then were former first lady Michelle Obama and Duchess Kate Middleton.

But goofy Smartwater commercials aside, how much does Aniston actually make from her high-profile deals? According to Forbes editor Natalie Robehmed, “I would estimate she makes over $10 million a year through her endorsements, easily.” What can we say? As the Murder Mystery star told us in her L’oreal commercial back in the day: she’s worth it!

In addition to commercial deals, Jennifer Aniston has branched out into the fragrance world. At the time of this writing, she’s released six successful fragrances (via Celebrity Net Worth) available in department stores across the United States. According to People, Aniston got started in 2011 with the release of her “namesake fragrance,” although scents were a natural progression for the gorgeous A-lister.

“Remember when you were a kid and your mom would have these different bottles on her vanity, and they were always so beautiful,” Aniston recalled to People in 2017. “It just made me feel like I looked forward to being able to wear perfumes when I was a woman.”

While it’s unknown how much Aniston takes home from her perfume deals — they retail for around $30 to $40 a piece — she certainly knows what she’s talking about when it comes to quality cosmetic products. In 2012, Total Beauty estimated that Aniston dropped over $140,000 a year on beauty and healthcare items, according to previous reports of her preferred products.

It’s no secret that basically everyone has been dying for a Friends reunion in the era of TV reboots. And while we won’t be seeing Rachel, Ross, Joey, Monica, Chandler, and Phoebe return to Central Perk anytime soon, their respective actors — Jennifer Aniston included — signed on for an unscripted HBO Max special in 2020, according to Deadline.

The Friends cast will reportedly take home between $3 to $4 million each for the one-off special, per the outlet. However, as of writing, the special’s production and release are “yet-to-be determined … because of the [coronavirus] pandemic,” according to The Hollywood Reporter. Although the reunion special has been indefinitely delayed, Aniston told Deadline she was staying optimistic, adding that “this has also given [them] more time to make it even more exciting and more fun than it would have been.”

It seems that Aniston is just as excited to hit the series’ old soundstage as we are to watch it. “You’re never going to get rid of Friends, sorry,” she quipped to Deadline. “You’re [stuck] with us for life, guys.”

Jennifer Aniston took her love for wellness to the next level

In 2020, Jennifer Aniston upped her business in the skincare game when she became the Chief Creative Officer for collagen supplement brand Vital Proteins. The glowing actress has been vocal about her love for collagen products since 2016, according to Harper’s Bazaar, and part of her new role involves “putting her own spin on existing products and helping with brand strategy.”

“When the opportunity presented itself to be a part of the brand in a bigger way,” Aniston wrote in a post on Instagram that November, “I jumped on it.” Although it’s unclear how much Aniston is taking home with her position at Vital Proteins, the company is certainly on the rise.

In June 2020, Forbes reported that Nestlé Health Science had bought a majority stake, and the collagen company had grown to more than $100 million in annual sales after just four years. Considering The Morning Show actress has such gorgeous skin, we’re apt to believe she knows what she’s talking about. As for her other beauty secrets? “I always tell my friends to get more sleep and drink more water,” Aniston told Harper’s Bazaar UK in 2016. “If you’re dehydrated or you’ve under slept, it really shows in your skin.”

Between her acting career, endorsements, and merchandising, Jennifer Aniston clearly has an entrepreneurial eye — and it extends to real estate, too. “If I wasn’t an actress, I’d want to be a designer,” she told Architectural Digest in 2018. “I love the process.” According to Celebrity Net Worth, Aniston owns multiple apartments in New York City, totaling to at “least $10 million worth of property.” Her fabulous ninth-floor Gramercy Park apartment even comes with “all the facilities one gets while staying in a 5-star hotel,” per RepublicWorld.com.

None of Aniston’s residences have garnered quite as much buzz as the Beverly Hills home where she lived with ex-husband Brad Pitt during their marriage, though. The mansion, which was previously owned by Dr. Jekyll and Mr. Hyde actor Fredric March, was purchased by the former couple for $12.5 million in 2001, although they sold it to a hedge fund owner in 2006 for $22.5 million, according to Mansion Global.

With some newfound real-estate savvy on her side, Aniston purchased a home in the Trousdale Estates in 2006. Curbed Los Angeles reports that she paid $13.5 million for the house, which she spent the next few years fixing up, before selling it for $35 million in 2011, taking home a pretty profit. Um, can you flip our house next, Jen?