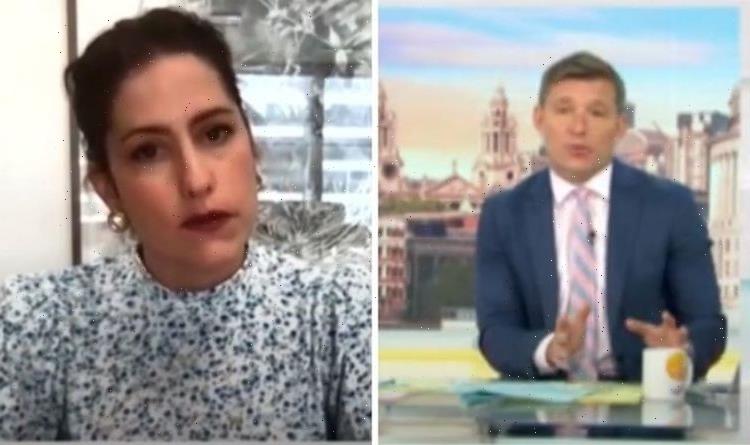 Ben Shephard had been speaking to Home Office Minister Victoria Atkins on Good Morning Britain, who was explaining why there are still not enough people with one or two jabs to reduce the need to self-isolate. Along with co-host Kate Garraway, Ben was trying to work out what message the government wanted people to follow, but ITV viewers watched as he snapped the minister was “ignoring” him as she responded to his questions.

Explaining the statistics, Atkins said: “If you’ve been in contact with someone who’s tested positive then you are five times more likely to develop Covid yourself.

“We know also that there are something like three million 18 to 30 year olds who haven’t had any vaccination at all at the moment.

“We know that. And absolutely, if you do test positive or you have shown signs of Covid then absolutely you should isolate.

“But for those that have been double jabbed, those that get pinged, and then they take a test and the test is negative, they can take a test for a couple of days – then they’re still negative they can go back to work.

“So this is where the double vax point comes in,” Atkins answered.

“Because the more jabs we get into arms then we can progress to that next stage.”

The somewhat heated discussion came as Shephard highlighted the confusion over the Track and Trace app after Paul Scully said on Tuesday the app’s instructions were merely advisory.

Viewers at home were keen to give their view on the topic, with many joining in the social media discussion.

“They say there slightly less transmissible but how would you know who it is ? It’s a load of rubbish that a vaccinated person should have different rights to all others.” (sic)

Another wrote: “Nobody needs to isolate now what happened to hurd immunity or was that another lie from the government nothing they say makes any sense. And why the hell should our jobs be a risk if we don’t want the jab because its classed as a temporary vaccine even Dr Robert malone says dont.” (sic)

“Wrong strategy from govt again. Two jab people still become very sick and in hospital, and some people getting Covid twice. Not enough known about immunity of the vaccines and people previously infected. Israel have already trodden this road, restrictions now back in place,” a third penned.

Someone else commented: “Why? You can still catch and pass on Covid if you’re double jabbed. Surely producing negative tests would be better.”

Others complained that the minister had come on the show to speak about a different topic, which was overshadowed by the presenters questioning Atkins over Track and Trace.

“@benshephard This minister had some really important announcements from her remit of protecting women, and you gave her 30 seconds at the end. Disgusting, nice to see you and Kate don’t think it’s that much of a problem. You spent more time on copying accents,” one wrote.