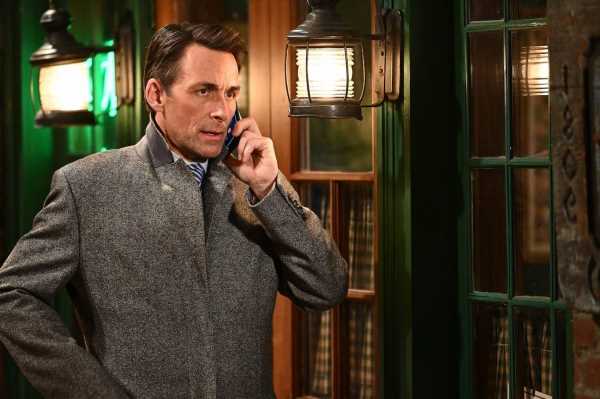 James Patrick Stuart joined the cast of General Hospital in 2016 as the villainous Valentin Cassadine. The character has been described as one of the most dangerous Cassadines on the show, but Valentin seems to be moving away from his shady past. In fact, Stuart revealed it is “fascinating” to see Valentin’s character growth.

James Patrick Stuart has talked about playing a ‘villain’ like Valentin

Although Valentin may come off as a bad person, Stuart believes there is more to the character than his villainous behaviors. This is something that informs Stuart’s work as he portrays Valentin on-screen.

“I’ve said this before, but you don’t play a bad guy,” Stuart told Soap Central. “Anybody who sets out just to play a bad person is really missing the meat, the main course of the meal. There are broken people in the world who darken other people’s lives, some of them even intentionally, but getting into why somebody would feel empowered doing that is part of the fun.”

“I’ve always said that Valentin’s upbringing led him to a grown-up life where he wasn’t fully functioning in any relationship,” Stuart explained. “That’s what was so amazing — about the only redeeming thing he had was this little girl, and this connection he had with her was the only pure thing he had in his life. I think she was his redemption. And any connection he had beyond her was because of her.”

These days, Valentin has shown viewers even more glimpses into his vulnerable self, especially after losing his relationship with Nina Reeves (Cynthia Watros) and being left at the altar.

“A year-and-a-half ago, Valentin was arrogant and manipulative and he was borderline cruel and he just got taken out at the knees,” Stuart told Soap Opera Digest. “I just find it so fascinating that he got a hefty dose of humiliation and instead of using that for more fuel to punish, he actually grabbed an opportunity to make a better man of himself.”

Stuart added, “I did a scene with Josh [Swickard, Chase] like that, which was really fun… but Valentin was alone in a room with Chase and he realized he didn’t want to pass on the opportunity to mention that he feels personally responsible for what happened to him [Peter poisoning him] and he needed to say something. And that’s my boy Valentin growing up a little bit.”

Valentin will likely experience betrayal in the near future

While Valentin seems to be moving toward a more moral lifestyle, Stuart does not know if this trend will continue once he experiences a huge betrayal in the future. Valentin is currently being misled by Brook Lynn Quartermaine (Amanda Setton) about having a daughter, but it turns out the child does not belong to the couple.

Given how much Valentin loves the baby, Stuart believes “it’s going to be tragic when he finds out the truth.” It’s likely Valentin could try to seek revenge for what happened.