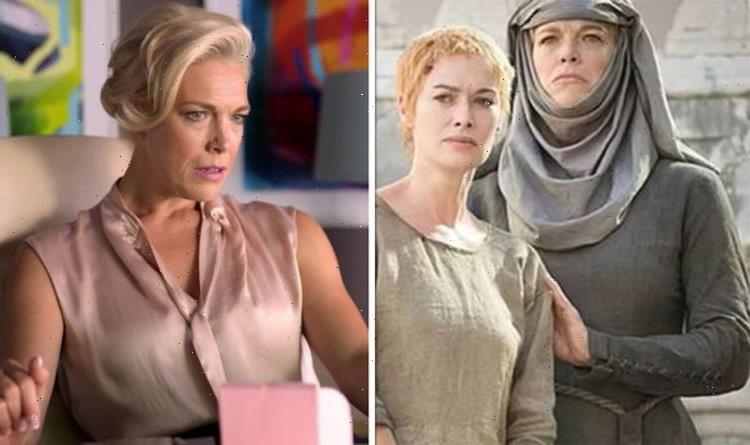 Ted Lasso was the surprise hit series of 2020 and fans couldn’t wait for the Apple TV+ show to return. As the heartwarming series continues to capture audiences’ hearts worldwide, former Game of Thrones actress Hannah Waddingham detailed her worry about the portrayal of her character Rebecca in season two and why she could see potential in the series from the very beginning.

Waddingham terrified viewers with her turn as Septa Unella in the HBO smash hit Game of Thrones.

Unella was a member of the Most Devout, the ruling council of the Faith of the Seven and is remembered for punishing Cersei Lannister (played by Lena Headey) for her crimes.

However, in 2020, Waddingham turned her hand to comedy when she signed up for Ted Lasso.

The star recently detailed her experience of working on the series as well as revealing her worries about her character Rebecca’s portrayal in season two.

She explained that she was “greatly concerned” that Rebecca’s story arc was concluded in season one and there was nowhere for her character to go heading into season two but luckily, admitting she “hoped they [the writers] hadn’t” made the drastic change.

The star had hoped that Rebecca was suddenly a “completely together” person and had room to grow she told Town and Country magazine.

Despite major changes in season one in regards to Rebecca’s place with Ted (Jason Sudeikis), Coach Beard (Brendan Hunt), and the rest of the Diamond Dogs, the actress was elated that Rebecca was still “a hit mess with men”.

The writers of Ted Lasso have chosen in season two to focus on Rebecca’s pitfalls at work and in her personal life.

“I love that you can see her from one angle say, ‘Oh, she’s a boss bitch.’

“But from the other angle, you’d be like, ‘Oh, Rebecca,’” Waddingham added.

Another primary focus is developing Rebecca’s relationship with the players this season, especially as the team are struggling with a series of ties and changes within the group.

Rebecca has massively transformed over the series as she originally started out as Ted’s unknown nemesis.

The character hired the unqualified Ted to coach the AFC Richmond team as revenger on her ex-husband for cheating.

She desperately wanted Ted to fail but even she succumbed to Ted’s charming and caring nature and the two, eventually, became great friends.

Waddingham joked that she recognised the potential in Ted Lasso immediately but she had no idea about Rebecca’s journey “past the pilot”.

“Without seeing anything else, I knew there was potential.

“I read that script and thought, ‘Okay, there’s no way that this character is going to be anything like I think she is’,” the star remarked.

The actress explained that Rebecca had an epiphany at the end of season one, where she says to friend Keely (Juno Temple): “I lost myself for a minute, but I’m trying to find a way back.”

This moment was huge for the character and has greatly impacted her search for love and friendship in season two, and fans will surely be excited to see Rebecca’s arc continue as the series moves forward.

All seasons of Game of Thrones are currently available to watch on Now TV.