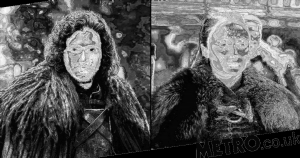 A new leaked script from Game Of Thrones has revealed that Jon Snow (Kit Harington) never got over sister Sansa (Sophie Turner) revealing his biggest secret.

In season 8, Jon made Sansa vow to never reveal his real parents were Rhaegar Targaryen and Lyanna Stark – because that would reveal that he was actually the true heir to the Iron Throne.

He knew this revelation would mean disaster for Daenerys Targaryen (Emilia Clarke) his power hungry lover he’s sworn an oath to.

(It would also make her his aunt, which opens up a whole other heap of problems.).

But rather than stick to keeping her brother’s secret, Sansa eventually told Varys (Conleth Hill) aka The Master Of Whispers, whose deep connections have him knowing secrets all across Westeros.

Telling him this secret sparked a chain of events that led to Daenerys finding out the truth, accusing Varys of conspiring against her, and killing him with fire by dragon.

A script note found by fans after the official scripts for the final season leaked online revealed that Jon, who had pledged his allegiance to Dany regardless of his heritage.

It reads: ‘Jon stands in front of Sansa. He hasn’t entirely forgiven her for betraying the oath he made her swear in the godswood.

The revelation comes after the betrayal was seemingly overlooked in the final episodes (one of the many things that viewers have had a problem with in the final season).

In the end, Daenerys’ bloodthirsty ‘at any costs’ fight of the Iron Throne saw a city of people slain at her hand, and with plans to conquer the world, Jon had to betray his love in order to save the kingdom.

He was banished to serve out his days back at The Wall, with Sansa taking over as Queen of the North, and brother Bran ruling the new Six Kingdoms of Westeros.

Game Of Thrones is available on Sky Atlantic and NOW TV.