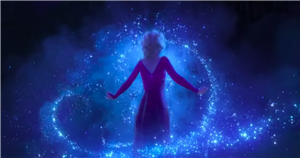 It's time to let go of the old and embrace the new.

The adventures of Anna and Elsa continue in the sequel adventure to the hit animated film Frozen, with the new Frozen 2 trailer showing off an epic journey for new Queen Elsa as she answers a distant call.

Idina Menzel and Kristen Bell reprise their roles as Elsa and Anna, respectively, but we can also welcome back Jonathan Groff as Anna's love interest Kristoff and Josh Gad as the hilarious snowman Olaf.

Another new arrival shown in the trailer is the Emmy Award-winning actor Sterling K Brown's character of Lt. Destin Mattias, who seems to have a link to the past.

We see an array of gorgeous new shots, including some new creatures and a look at an enchanted forest where Elsa's journey will take her.

Elsa is also shown creating frozen crystals in the sky, while Arendelle looks set to come under threat from the natural elements.

Will Elsa be able to save the kingdom and discover what it means to be a true ruler?

And will her newfound close relationship with sister Anna survive the fight of their lives?

Not long now until we find out!

Are you excited for the release of Frozen 2? Let us know in the comments below.