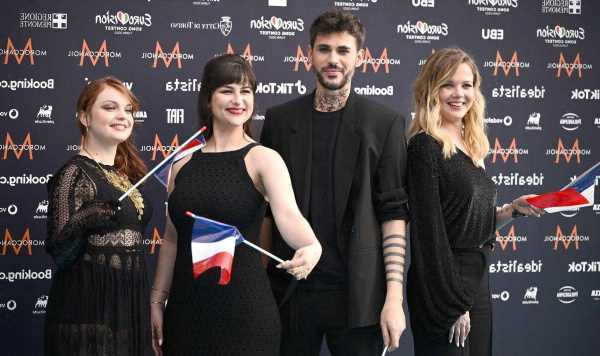 This year France will be represented at the Eurovision Song Contest by Alvan & Ahez, who have come together with the track Fulenn. However, instead of singing in French, the act will be performing in Breton, a Celtic language spoken in Brittany. Express.co.uk looks at why this is the case and the song lyrics of Fulenn.

Why is Alvan and Ahez performing in Breton?

France is being represented by Alvan & Ahez who are both from Brittany.

Alvan is a multi-instrumentalist electro artist, while Ahez is a trio of traditional singers comprised of Marine Lavigne, Sterenn Diridollou and Sterenn Le Guillou.

Although Alvan’s sound is very much modern electronica, he does also use traditional chants in his compositions.

Ahez aims to showcase their regional heritage through their music with modern takes on the ancient myths from Brittany.

The trio also writes and performs their music in their native language Breton, which is the reason why the French entry will be sung in their mother tongue.

The last time a song was performed in Breton was 26 years ago by Dan Ar Braz back in 1996 when he represented France with his song Diwanit Bugale.

Alvan & Ahez becomes the second act ever to perform a song in Breton and the decision to use the language was a very conscious one.

While Ahez member Le Guillou said: “As for us, we are used to sing in Breton… We do speak the language.

“We’re three and we learned it at school, at a young age, besides learning traditional songs.”

Le Guillou went on to tell Eurovision World: “When we met Alvan, we wanted to create something different in Breton because that’s a very natural thing for us.”

She described Fulenn as a “mix”of their identity and culture, explaining it was a combination people don’t usually hear which might have been behind their victory in the selection process.

Fulenn translates to “spark” in English and the track’s lyrics have a mythical theme to them.

Some of the lyrics are: “In the darkness of the woods germinates the night/The stars appear in the restless rustle/A feminine shadow twirls in the light of a torch/Ignoring the wild beasts I dance.”

Even though the track has a traditional element, Alvan & Ahez said the song was not stuck in the past but constantly evolving.

The staging for the performance will match the lyrics with a green light to evoke the forest and a woman will be dancing amid fire pits.

Alvan said they created the song “with heart” in the hopes Eurovision fans will enjoy the track and vote for them.

Due to being in the so-called Big 5 – consisting of France, UK, Italy, Spain, Germany and Portugal – Alvan & Ahez are straight through to the final.

Therefore, fans will be watching the group perform in the grand final while other nations battled it out in the two semis during the week.