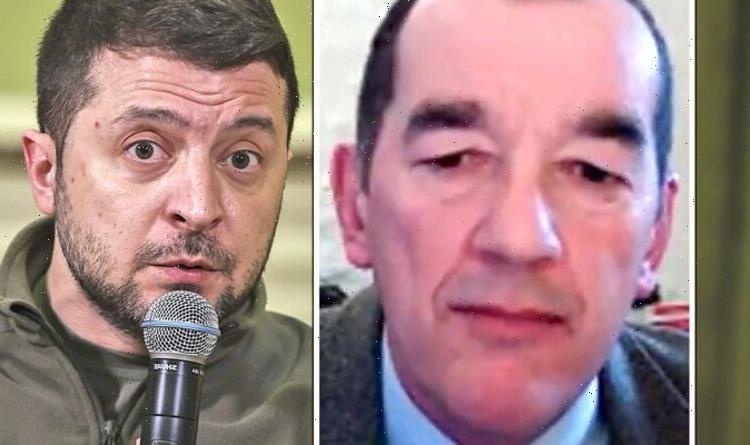 The fight between Ukraine and Russia has been ongoing for over four weeks and sees no resolution to end the horror which has ensued in the cities of Ukraine. Former army officer Patrick Benham-Crosswell joined GB News presenters Stephen Dixon and Gloria De Piero, where he gave his opinion and verdict of when the war could come to an end.

Stephen asked: “What do you see as an end game here, Patrick? We have asked this of you before.

“But I mean, it has just changed sort of week in week out, is there an end-game here, or what we would consider a sort of conventional end-game?”

Patrick explained: “My crystal ball is still no better, I am afraid, I think everyone is going to, have fought themselves to a stand-still.

“There is going to be a halt in the spring when the ground will reharden, and then it will be the case of ‘Ok, double or quits’ or maybe sit down and get someone to mediate and say ‘Stop this.’

“It is hard to see how the Ukrainians are going to accept that the position that is anything other than a status pro anti.

“It is hard to see that the Russians are going to accept anything other than some form of territorial gain, and then there is the argument of who pays for the thrashing of the cities.

“The Russian argument about well can we have our tanks back, so I am afraid i don’t see this ending easily anytime soon unless there is a game-changing diplomatic move,” he concluded.

He said: “We have always insisted on negotiations. We have always offered dialogue offered solutions for peace. Not only during 23 days of invasion.

“And I want everyone to hear me now, especially in Moscow. It’s time to meet. Time to talk. It is time to restore territorial integrity and justice for Ukraine.

“Otherwise, Russia’s losses will be so huge that several generations will not be enough to rebound.

“Ukraine’s proposals are on the table. In the coming days, I will continue to appeal to the nations of the world to call for peace for Ukraine.”

UK President Boris Johnson closed the Conservative Party conference with a large focus on the UK’s response to the war.

He pleaded: “We know that we must do more to help, I told Volodymyr, and I pledge to you that we will.

“Thank you for pointing out that it was the UK that months ago saw the threat of the Putin war machine and how that could be unleashed.

“We were the first European country to send in defensive weaponry, and where we led, dozens are now following.

“We will do more to tighten the vice around Putin’s economy, and with every day that the slaughter, the inhuman behaviour of Putin’s war machine continues.

“I think that the resolve of the world to do more is growing, and I am more than ever convinced that Putin will fail.”