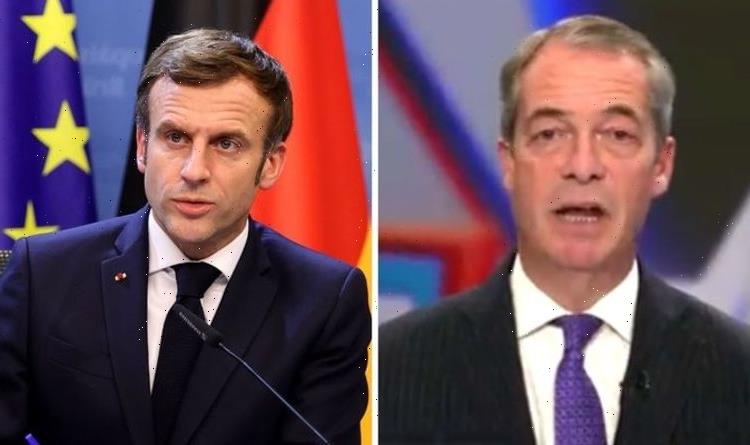 Nigel Farage unleashed his fury against French President Emmanuel Macron who stated he wanted to “p*** off” people who refuse the COVID-19 vaccine. An outraged Farage told GB News viewers the leader’s comments were “truly astonishing” before labelling Macron a “ghastly little man”.

During Wednesday’s instalment of GB News Farage, 57, updated viewers on Macron’s controversial remarks to French daily Le Parisien.
Farage said: “Now what a Farage moment we have here. President Macron – well this is absolutely astonishing.
“In response to an interview, he said he wants to pee off Frances’ unvaccinated in denying them access to even more aspects of daily life.
“Yes, the French president’s inflammatory comments came as the Government seeks to punish through parliamentary legislation people who haven’t got a vaccine.

“They want to make it compulsory if you want to enjoy cultural activities, to use am intercity train, to visit a cafe from January 15, and no longer is it possible to have a recent test to say that you’re negative to live any sort of a normal life in France if, and probably when, this legislation passes.”
The interview with Macron was uploaded online on Tuesday evening, Farage explained.
The GB News host added: “And this is a direct quote from the French President.
“As for the non-vaccinated, I really want to pee them off and we will continue to do this until the end, this is the strategy he said.”

During the interview with the French newspaper, Macron added he wanted to “limit as much as possible their access to activities and social life”.
Farage added: “He even said, ‘When my freedom threatens that of others, I become an irresponsible person and an irresponsible person is not a citizen.'”
Farage, who was left stunned by the French president’s comments, said: “They are truly astonishing words.
“I have to say that Macron is a ghastly little man. I met him and saw all these big built-up shoes and didn’t trust him from that moment onwards.”

Macron’s comments come in wake of France putting in place a health pass that prevents people without a PCR test or proof of vaccination to enter restaurants, cafes and other venues.
The Government wants to turn it into a vaccine passport which means only the vaccinated can have a health pass.
In the detailed interview, Macron’s first in the new year, he said: “I won’t send (the unvaccinated) to prison, I won’t vaccinate by force.
“So we need to tell them, from January 15, you won’t be able to go to the restaurant anymore, you won’t be able to down one, won’t be able to have a coffee, go to the theatre, the cinema…”

The leader also said he had a good mind to run for re-election in April, but did not explicitly announce his intention to run.
However, he said: “I would like to do it.”
As the clear favourite in the polls, Macron has not yet officially said he was running, although his lieutenants are already preparing a campaign.
GB News can be watched on Sky on channel 515, Freeview channel 236 and Virgin Media.