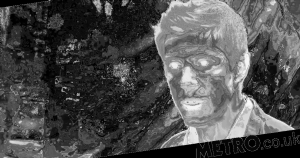 Robert Sugden (Ryan Hawley) has been pushed to the limit by evil rapist Lee in Emmerdale as the disgusting villain made vulgar comments about Victoria Barton (Isabel Hodgins), even indicating that he would target another woman after he had finished tormenting Victoria. Having felt powerless to stand up for his sister up until this point, Robert was driven by rage and he has left Lee for dead after walloping him hard over the head with a shovel.

With Lee demanding an apology from Victoria, despite being now very open about the fact that he committed the vile sexual assault against her, as well as wanting compensation, Robert could see that he wasn’t going to go anywhere unless they had a showdown.

As Robert tackled him, Lee mocked him and laughed in his face before commenting that his sister fought harder than this. As Lee started to swagger away, Robert told him he wasn’t walking out of it this time and he launched his attack. Victoria was horrified to witness Robert thump him to the ground and as the red mist cleared, the consequences of what he had done started to hit Robert.

As villagers came to the scene and Lee was loaded into an ambulance, Aaron (Danny Miller) insisted to Robert that he has to tell the police that Lee attacked him first and he was fighting back. When Robert replied that Lee could wake up, Aaron indicated that he might not – which could be worse as Robert would then be responsible for his death and potentially face years in prison for manslaughter or even murder.

With Ryan confirmed to be leaving the show, the storyline seems to indicate the beginning of the end for him and as Robert reels from the fact that he could lose everything for defending his sister’s honour against a monster, there is no turning back the clock.

Is it all over?

Catch up with Emmerdale on ITV Player.