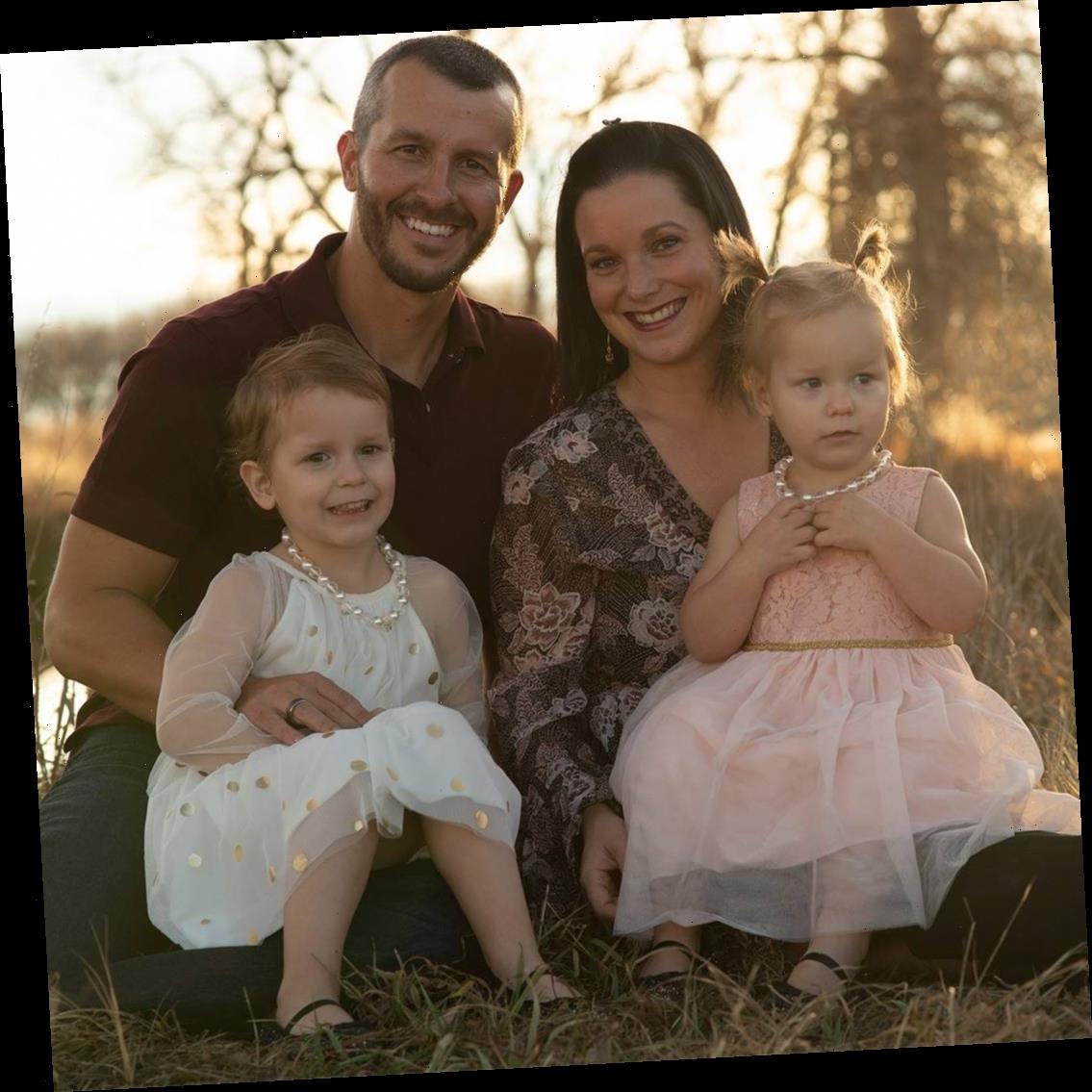 American Murder: The Family Next Door offered insight into the disappearance of Shanann Watts and her two young daughters entirely through archival footage and social media posts.

"All materials in this film were captured by police, media or uploaded to the internet. Personal footage and messages were also provided by Shanann's family and friends."

That is the message that kicks off Netflix's documentary American Murder: The Family Next Door. Released Sept. 30, the 83-minute film examines the disappearance of Shanann Watts and her children that made national headlines in 2018. Many people know the tragic story that followed: Her husband Chris Watts confessed to murdering his then-15-weeks-pregnant wife and two daughters, Bella, 4, and Celeste, 3. But the events leading up to the gruesome crime are more devastating than ever imagined.

After pleading guilty to five counts of first-degree murder, one count of unlawful termination of pregnancy and three counts of tampering with a deceased human body, he received five life in prison sentences in Nov. 2018. (His plea deal spared him the death penalty, according to NBC News.)

In a somewhat unusual format for a true crime doc, American Murder is told entirely through archival footage that includes Shanann's social media posts, law enforcement recordings, text messages and never-before-seen home videos. However, when pieced together, the various segments deliver insight into the Watts' marriage that headlines never could.

And the raw, firsthand look into Chris and Shanann's life together before the triple-murder case is disturbingly fascinating, with the documentary—directed by Jenny Popplewell—becoming Netflix's most-watched program in the U.S. just days after its release. While hard to watch, the film reconstructs the weeks and events leading up to the horrific crime.

Here's everything we learned from American Murder: The Family Next Door:

Nickole Atkinson, the friend who called the police requesting a wellness check after she was unable to get in touch with Shanann, revealed to the responding officer that her friend seemed off on their recent business trip to Arizona.

"I dropped her off at two o'clock this morning," she explained. "She was very distraught over the weekend, wasn't eating normally, or drinking, and we kept trying to force it on her."

But Shannan's text messages to Chris during that weekend away show her desperate attempts to save their marriage.

"I miss and love you so much," one read. "I am still in shock we are having a little boy! I'm so excited and happy!" Another said, "Thank you for letting me hold you this morning, it felt good!"

Amanda Bynes Returns to Instagram With a Dramatic New Makeover

Khloe Kardashian Laughs Off “Shade” Over Her Latest Instagram Makeover

She also left a two-page handwritten letter for her husband on the counter that expressed how she had felt over the course of their five-week separation.

"I missed watching you laugh and play with the kids," she wrote in one portion. "I love seeing their smile with you."

And in another, she vowed, "I will always fight for our marriage and you! I love you baby with all my heart!"

But two days before the murders, Shanann became suspicious when she saw a charge for a dinner on their bank statement when he said he was attending a hockey game. As it turned out, Chris was actually on a date with his mistress.

As Atkinson recalled, "She's like, 'I haven't talked to him all day or hardly at all this weekend and he wants to work out.'"

According to the doc, Chris began having an extramarital affair with his co-worker Nichol Kessinger shortly before his family was found dead in Aug. 2018. While he told Nichol he had two daughters, he also said he was "currently in the process of the separation from his wife."

But Kessinger went to the police after learning the then-missing Shanann was pregnant.

At first, she seemed to defend him—"I think he's a really good guy and I am worried about his wife and kids"—but she quickly changed her tune.

"I had to find that out through the media," she told the detective. "It's really concerning me that this woman and her children cannot be located. It's not OK and it's scaring me. I'm worried for all of them."

After initially denying the romance multiple times during his interrogation, Chris finally admitted, "I cheated…that five weeks I was alone, I was with [Kessinger] most of the time."

"She's a wonderful person. She knew I was married, yes," Chris continued. "I told her we were going through issues, yes."

In her interview with police, Kessinger vehemently denied ever expressing to Chris that his children would be an issue for her.

And when the officer asked if she had ever said "anything about his wife being a problem" during their short relationship, Kessinger once again said, "Never, never. This shocked me just as much as it shocked the rest of the world, like all of it."

According to Atkinson, Chris' parents did "not like" Shanann, revealing Ronnie and Cindy Watts did not attend the couple's wedding during her interview with police.

When asked why her in-laws didn't like her, Atkinson theorized, "She can be bossy. But in a good way…she's trying to push you to do good things and, like, motivate you. It's not, like, a bitchy bossy."

But Chris had a different explanation: "My mom just never thought she was good enough."

And seven weeks before her death, Shanann and her mother-in-law got in an explosive argument during a six-week trip to North Carolina (Chris remained in Colorado alone for the first five weeks) about her daughter Celeste, whose nickname is Cece.

"Cindy bought ice cream that had everything Cece's allergic to in it," Atkinson explained the the investigator of their fight. "So Shanann asked Cindy, 'Please do not give this to Cece. She cannot have it.'"

Mark Jamieson, Chris' best friend, also discussed the contentious relationship between Shanann and Cindy during his conversation with law enforcement.

"Shanann came into the living room and was yelling at Cindy, telling her she's trying to kill her baby or something because of the food allergy," he alleged, recounting what Chris' mother had told him. "Cindy claims she had no idea about it. They had this huge argument and she ended up kicking Shanann out of the house."

Atkinson went on to say Shanann did not see Chris' parents for the rest of the trip and they did not attend Cece's third birthday party.

"In laws no show," she texted a friend after the event. "I don't ever want to see them again."

Ultimately, after Chris continuously denied he was having an affair, Shanann believed the main issue in their marriage was the friction between her and his parents, texting a friend the argument was "only thing that happened…over this month."

What the Neighbor Suspected

An unnamed male neighbor ended up playing an essential role in the investigation after he informed police that he had security cameras that faced the Watts' home and offered to show them the footage "because if there is any sort of action out there, I would have got it."

According to police, the cameras ended up capturing Chris moving his car at 5:17 a.m., and Chris, who was watching the CCTV footage along with the two men, explained he often parked there to load tools in his car.

But after Chris left, the neighbor immediately told the officer, "He's not acting right at all."

"He's never rocking back and forth, and if you look," he continued, pointing to his backlog of recordings, "He never loads his stuff in and out of the garage ever."

The neighbor continued to weigh in on Chris' current demeanor, which he said was unusually talkative.

"He's normally…quiet, really subdued, he never talks, so the fact he's over there blabbing his mouth makes me kinda suspicious of something."

Initially, while speaking to his father in the interrogation room, Chris claimed he strangled Shanann. The fit of "rage," as he called it, came after an intense break up discussion, which he alleged led his wife to strangle Celeste. He also noted seeing Bella's lifeless, blue body on her bed.

Officials did not buy his version of events and he eventually confessed to murdering his two daughters after driving the 40 miles to the oil field to bury Shanann's body.

"I picture that whole ride out there…It's just, like, couldn't I have, like, saved my girls' life?" he told investigators. "Couldn't I have done something? Why did I do it? I don't know. I wanted all my life was to be a dad, just to have, you know, kids and they love me…all that. Nothing made sense."

"She said, 'What happened to Cece?'" he recalled. "Every time I close my eyes, I start to see her saying, 'Daddy, no,' and that was it. I hear that every day."

American Murder: The Family Next Door is now streaming on Netflix.