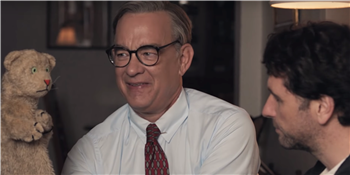 The trailer for A Beautiful Day in the Neighborhood, which stars Tom Hanks as Mr. Rogers, finally dropped Monday. Have the tissues ready, because even two minutes of Fred Rogers can break your heart.

The film is based on a profile of Mr. Rogers that journalist Tom Junod wrote for Esquire in 1998. In the film, Matthew Rhys plays a fictionalized version of the writer, embarking upon the profile of the kids television icon with initial reluctance before forging a friendship with his subject, the true guru of pretty much everything that’s good in the world. In the trailer, Hanks wears the iconic sweater, breaks out King Friday and Daniel Striped Tiger, and, most tear-jerkingly of all, takes in a loving rendition of “It’s a Beautiful Day in the Neighborhood,” performed by children who recognize him on the subway.

As one of the most trusted Americans alive, Hanks was an obvious fit for the role of Mr. Rodgers. But in terms of demeanor, there were some pretty big differences between the two men. “He’s got a loud voice; he walks into a room and you know that he’s there! He shakes everyone’s hand, he’s really funny, there’s never an awkward moment when you’re around Tom Hanks,” director Marielle Heller told Entertainment Weekly. “Fred allowed for awkward moments. Fred sat in silence and stillness in a way I don’t think Tom naturally does.”

But Hanks did his research for the role. According to Joanne Rogers, Fred’s widow, the first question the Hollywood legend asked her was about her husband’s signature slow, soothing voice. Mrs. Rogers told him that her husband really did talk that slowly—even at home. And apparently, Mrs. Rogers found Hanks “perfect” for the role. Check out the trailer below.