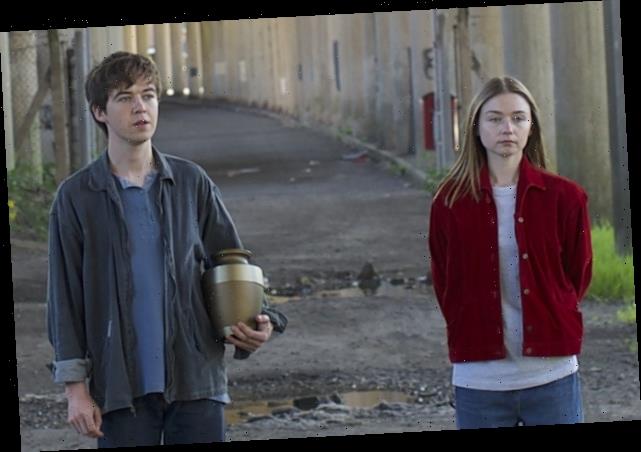 Warning: The following contains spoilers about The End of the F***ing World Season 2.

“You can think you’ve run away from something — but actually, you’ve been carrying it with you the whole time,” Alyssa says during the End of the F***ing World finale. At this moment, she is speaking to the trauma that she has tried and failed to repress since her attempted rape in Season 1, as well as the overarching theme of this unexpected (and profoundly moving) Season 2.

When Episode 8 begins, Alyssa is desperate to banish visions of that fateful night at Clive’s house. She leaves her family a note at the police station and returns to the former home of the serial rapist. She makes her way up to the now-empty bedroom where the attempted rape and subsequent murder took place. “You can get stuck in a place and not even realize it,” she says. “If you’re not careful, you can get stuck there forever — like Bonnie.” And Alyssa refuses to get stuck. She picks herself up and heads downstairs, then takes a dip in Clive’s pool as a way to cleanse herself of the pain that she has endured for the last two years.

James, meanwhile, carries more than just the trauma of the night he killed Clive, the gunshot that nearly killed him, or the recent loss of his father. In addition to all of that, he is still affected by his mother’s suicide. When Alyssa leaves a note for her family at the police station that in part reads, “Take care of James,” he immediately assumes the worst. “After Bonnie, after everything the night before, it felt old that Alyssa had just gone,” he says. And so, he embarks on a search for the woman he loves. First, he returns to Aunt Leigh’s house. When Alyssa’s not there, he checks in with her soon-to-be ex-husband Todd. She’s not there, either.

“Dread can start as a small thing,” James tells us. “It’s so quiet, you can pretend not to hear it. But it gets loud — really loud — and you can’t ignore it anymore.” He walks over a bridge — the very same bridge that Alyssa walked over at her lowest point in Episode 2 — and he begins to consider that Alyssa has died by suicide. Next he checks the diner, which is cautioned off after the events of Episode 7. As he stands outside, he has visions of Bonnie holding a gun to her own neck, as well as the man for whom she was willing to kill. That’s when it clicks for James, and he realizes that Alyssa must be at the former residence of Professor Koch.


When James enters the house and sees Alyssa’s sweater on the staircase, he breathes a sigh of relief. He calls for her, and they convene in the living room. She’s soaking wet, having just gone for a swim. “I feel better now,” she tells him. James starts to shake uncontrollably, overwhelmed by the sight of the only person he has left in his life. He tells Alyssa that he thought she’d done “something bad.” She assures James that she’d never take her own life, then offers him a shoulder to cry on.

Afterwards, Alyssa accompanies James to the park where his parents first met — only now it’s a motorway. It’s where James has decided to scatter Dad’s ashes. He opens the urn and discovers that, somewhere along the way, the ashes got wet and formed a paste. After he expels of its contents, he apologizes to Alyssa; he says he tried to make her the answer to his grief. Alyssa then apologizes in typical Alyssa fashion and says she’s been “quite s—t, too.”

This brings us to the very last scene, perhaps of the entire series. “I read somewhere that if you want to talk to someone about something important, it’s easier if you don’t look at them,” Alyssa says. “It’s less confrontational or something.” So she gets up and sits beside James. She tells him that she heard what he said at the car pound in Episode 4. “I feel the same,” she says, but I need a lot of time… and some psychological help.” She takes his deformed hand, and the twosome look off into the distance. “I love you, too,” James says. “Yeah, don’t go on about it,” Alyssa deadpans.

It’s hard to see where a hypothetical third season of The End of the F***ing World could go — but that doesn’t mean it won’t happen. The first season, which was conceived as a miniseries, ended perfectly. That last episode was ambiguous, but that was the point, and many a TVLine reader deemed the renewal “completely unnecessary.” And yet, Season 2 managed not to cheapen the ending of Season 1. If anything, it deepened our understanding of these characters and what they’d been through.

Or at least that’s how I felt. Your opinion may vary.

What did you think of TEOTFW Season 2? And do you need (or even want) additional episodes after that relatively happy ending? Weigh in via the following polls, then flesh out your thoughts in Comments.