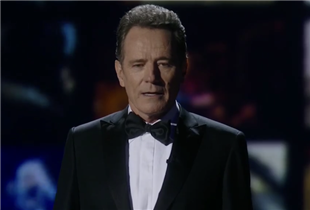 If the Emmys not having a host means we’ll get vibrant numbers like the one that kicked off Sunday’s show, please allow us to log our vote now: No more Emmys hosts ever!

We’re kidding. (Kind of.) It’s just that the opening of the 71st annual Primetime Emmy Awards was so blessedly short and sweet that we were genuinely pumped to see what would come next in the live broadcast from Los Angeles’ Microsoft Theater.

After an intro featuring The Simpsons‘ Homer Simpson getting hit by a piano, the camera cut to black-ish‘ Anthony Anderson leaping into action and running backstage to get things underway.

Anderson then grabbed Breaking Bad star Bryan Cranston and hurled him onstage, to thunderous applause. Without further ado, Cranston began using his best documentary-tracking voice to talk about the power of television. He said watching the moon landing as a child made him dream  that he could go “anywhere… even Albuquerque” — aka Bad‘s hometown.

“Television has never been this damn good,” Cranston said, kicking off a montage that began with Game of Thrones‘ final season knighting scene and featured moments from This Is Us, The Masked Singer, When They See Us, Grey’s Anatomy, Empire and many others.

When video of the opening becomes available, we will add it to this post. In the meantime, grade the Emmys opening via the poll below, then hit the comments to go into detail!