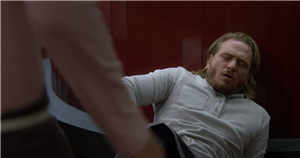 Emmerdale fans are growing increasingly worried for David Metcalfe in the Dales after his horror collapse in the shop.

He was busy playing 'bread baseball' with Jacob with some stale baguettes when he collapsed after suffering a gunshot wound in the Hop siege.

And things soon escalated, with Priya insisting they get him to the hospital – and that she temporarily moves in with David to take care of him while his girlfriend Meena is abroad.

Meena headed off to see her niece, who was in the hospital after being involved in a car crash – but fans are sure she'll soon be back.

That would put Priya directly in her sights, especially as she's been hugely jealous of David's exes and female friends before.

Though David's son Jacob advised him to let his girlfriend know the arrangements, David insisted Meena would be fine with it – and that Priya will have moved out long before Meena returns.

But fans of the show weren't so sure.

Taking to Twitter to share their fears, one fan warned: "Don't move in Priya, you'll end up in the book of death! #Emmerdale."

"Well I can imagine Meena's reaction tomorrow when she sees Priya's moved in!" someone else chirped.

Another viewer posted a GIF of someone destroying a bedroom, with the caption: "Meena when she comes back and sees Priya's moved in!"

It comes as the first details of Emmerdale’s super soap week have been released, with director Duncan Foster posting on social media that filming the episodes took a whopping 33 days.

The episodes will see Meena overtaken by jealous as she suspects there is more than meets the eye to David’s friendship with Victoria.

Emmerdale producer Kate Brooks said: “This is Emmerdale at its most ambitious as we take viewers through a series of show-stopping stunts.

"As the twists and turns come thick and fast, viewers will be left on the edge of their seats, and with Meena, at the heart of the story it means only one thing; not all our villagers will survive."