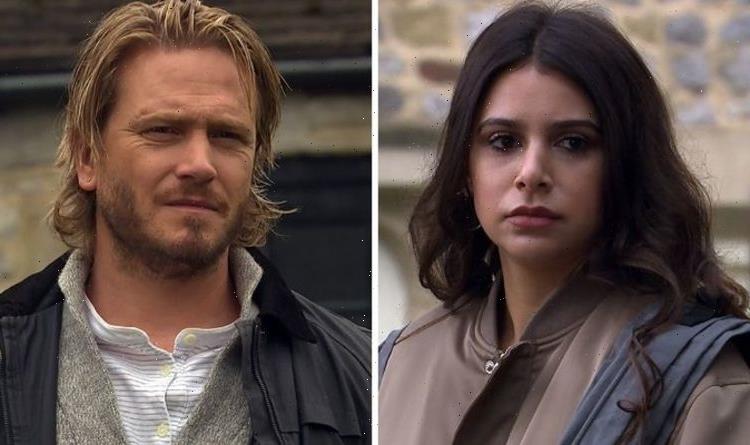 In recent weeks, Meena Jutla’s (played by Paige Sandra) manipulative behaviour has gone from bad to worse, especially after she killed Leanna Cavanagh (Mimi Slinger). Her jealousy has also grown as she has watched her boyfriend David Metcalfe (Matthew Wolfenden) getting even closer to Victoria Sugden (Isabel Hodgins). Little does she know just a few weeks ago, the pals shared a kiss after David’s son, Theo went missing. However, with the nurse currently out of the country, will Victoria and David get even closer, and more importantly, will Meena witness it all?

Meena tried to come up with a number of excuses about why she couldn’t leave, although, after David guilt-tripped her, she decided to leave.

However, has Meena have really left Emmerdale to jet abroad?

Earlier this week, viewers witnessed Meena setting her sights on Victoria once again, and it almost ended in more bloodshed.

The villain decided to steal Amy Wyatt’s (Natalie Ann Jamieson) keys so that she could break into Victoria and Amy’s house.

Meena had planned to move some items around in order to mess with Victoria’s head, but her plan almost fell apart when her rival unexpectantly popped home.

Meena tried to hide, although she grabbed Victoria’s paperweight from the side, ready to use as a weapon if she needed to.

Luckily for Victoria, Meena didn’t attack her, although she did call the police when she realised someone was in the house.

Meena may be in Ibiza, but she didn’t leave without making sure she knew David’s every move.

During Thursday night’s episode, ITV viewers saw just how possessive she could really be.

While in the shop, David bumped into Liam Cavanagh (Johnny McPherson) and his wife, Leyla (Roxy Shahidi).

David explained that his girlfriend had been texting him every hour to check up on him.

As Liam went to pay for his coffee, David began: “No, you’re not paying for those.”

“Of course, I am,” Liam replied as David insisted: “No you’re not. They’re a thank you, not even a big enough thank you for all the books you gave Jake.

As David’s phone beeped in his pocket, he added: “And that is Meena again.”

“Make sure the fridge is clean,” he continued as he read out her text message.

“How does she know where you are?” Leyla asked with a confused look on her face.

David went on to explain Meena had a location tracker on his phone.

“Where is she?” Leyla asked as David replied: “The hospital, I think. I don’t check it as much as she does.”

David admitted he hasn’t checked to see where his girlfriend actually is, or whether she is at the hospital with her sister.

Meena has already put a tracker on his phone, could she also have installed a spy camera in the shop to see what her boyfriend is really up to?

David and Victoria have already shared one kiss, and it’s only a matter of time before it happens again.

The question is, if Meena witnesses it happening, what lengths will she go to?

Viewers have also taken to social media to share their thoughts on the recent scenes.

One tweeted: “If David has brains, he would leave his tracked phone at the shop and go wherever he wants. That way possessive Meena thinks he is right where she wants him to be while he is actually with his secret love Victoria.” (sic)

A third added: “If a man said what Meena to David about knowing his location all the time they would rightly be a massive kick-off.” (sic)