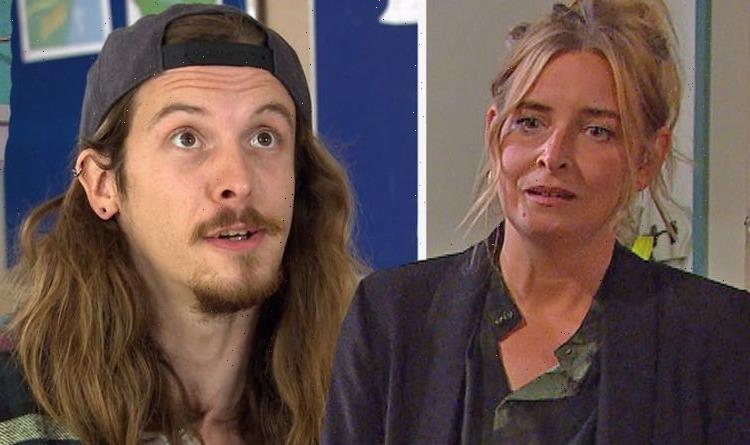 Next week, Emmerdale viewers will see Charity Dingle (played by Emma Atkins) embroiled in more drama with Mackenzie Boyd (Lawrence Robb). But this time, she has been dragged into it by her son, Ryan Stocks (James Moore). With family meaning everything to the Dingles, how far will she go to protect Ryan? Did she not learn from last time she did dodgy business with Mackenzie?

In upcoming scenes, Charity hears about a delivery of smartwatches having gone missing.

She is quick to accuse Mackenzie who denies all knowledge and tells her he hasn’t been involved in any recent deals.

While Charity has been fobbed off with a lie, fans of the soap will see Mackenzie with the stash of watches.

And when Ryan spots him with the holdall, he is suspicious.

Soon Charity is at Tall Trees hunting for the watches, adamant Mackenzie owes her for the last deal they did.

But Mack is surprised and relieved when she opens the cupboard and the holdall is not there any more.

Thwarted, Charity knows she’s not getting anywhere as Mackenzie continues to deny having the watches.

But after she goes, Mack begins searching for them himself – who took them?

The actor who plays Ryan has spoken out about this storyline and being embroiled in a darker arc than he usually is.

When asked why Ryan becomes suspicious of Mack, he said: “Mack is living with Ryan, so Ryan begins to suspect him pretty quickly. He seems to be coming home with lots of really expensive stuff and it doesn’t sit well with Ryan.

“Ryan knows Mack is up to something. Charity seemingly is believing Mack’s story but Ryan clocks the bag and knows he’s up to no good.”

As for whether Ryan enjoys getting one up over Mack, James added: “I think Ryan is a big fan of retributive justice, like a true Dingle always seems to be!

“He likes taking matters into his own hands, and I think he has a feeling that Mack is going to screw him over, and his intention is to be one step ahead.”

Ryan used to live with Charity, but since moving into the house share with Mackenzie, fans are wondering whether he has been foolish.

“I think Ryan has always been very wary of people, but he trusts Billy and feels confident having him in the house to have his back,” the actor explained.

James also said Ryan “knows there’s something not quite right about Mack, but sometimes he’s willing to collaborate if there’s a financial incentive”.

With Ryan knowing about the stolen watches and Mackenzie stashing them in a holdall – could he have been the one to move them or even sell them behind his housemate’s back?

“I think there is a part of Ryan that will always get involved in some shady stuff – that’s the Dingle side coming out,” James said.

“But he’s also very moralistic and always prepared to set people straight. So it could go either way.”

It seems the apple doesn’t fall far from the tree as James continued: “There will always be that mischievous streak in him that’s reminiscent of Charity, and as much as she wants to protect him, he is her son, and she knows what that entails and it’s worrying for her.”

But how would Charity feel if she found out what Ryan was doing? “Probably annoyed, but not surprised,” James revealed.

“She knows that it would be the pot calling the kettle black, but really she just doesn’t want to see him get hurt.”

As for what else is in store for Ryan, James spoke about the people his character is associated with in the village now.

“Well obviously he’s living with Billy and Ellis, and has found an unreasonably strict landlord in Marlon, but he’s also really good friends with Matty, which has been a great friendship and really exciting to develop, especially since me and Ash are really good friends in real life- he’s a joy to work with,” James said.