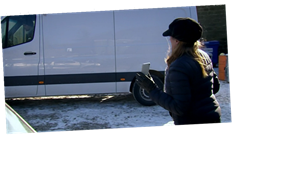 Emmerdale viewers were astonished as they spotted snow during the hottest March in 50 years.

Soapland was covered in fluffy white snowflakes as the village geared up for Mandy and Paul’s wedding day – and the horror crash that will kill at least one character.

Fans flocked to Twitter to point out the inconsistency.

Another added: "Fairytale of Emmerdale" in reference to The Pogues’ Christmas hit.

Someone else penned: "Are they not cold with snow blowing everywhere?"

And a fourth said: "Warmest March in 50 years… and it’s snowing in Emmerdale."

This has been the hottest March on record since 1968, when temperatures soared to 25.6C.

The snow was falling heavily across the village, and covered the floor while Nicola (Nicola Wheeler) attempted to film Mack's (Lawrence Robb) dodgy van scheme.

But he caught her in the act and trapped her in one of Jimmy's vans.

Vinny was backing away from his villain father when he stumbled and fell to the ground – the perfect position for Paul to press him into the floor with one foot.

And after his cruelty landed Vinny in hospital last week with internal bleeding, viewers could imagine how much that hurt.

"Dad, you're hurting me," Vinny said during the tense scene.

Paul hissed at Vinny to fix his speech as the youngster cowered on the floor.

Someone wrote on Twitter: "I can't stand him in Emmerdale big bully… Tormenting his son like that. I hope someone gives him what for!!"

"I know it's only a soap, but as a loving dad and granddad I find this very uncomfortable viewing," another admitted.

Others are worried Vinny will be one of the victims, after producers confirmed at least one character would meet their "untimely" end as Jimmy crashes his van into a farm building.

But, as Paul actor Reece Dinsdale let slip on This Morning, there are four potential victims who are in peril.

Fans have narrowed the list down to Rodney (Patrick Mower), Charity (Emma Atkins) or Vinny.