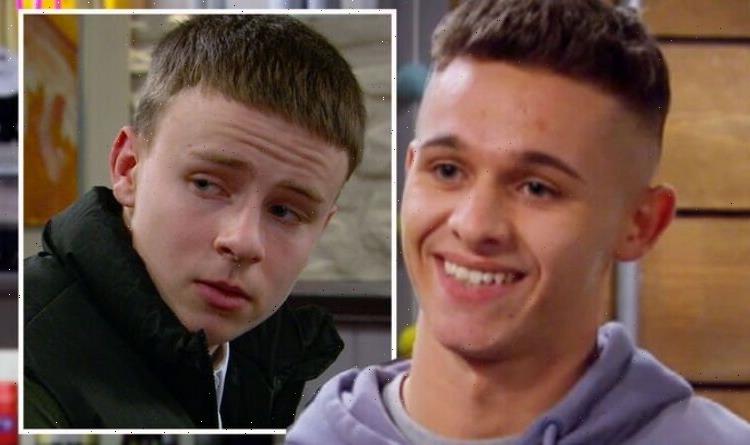 Emmerdale: Samson says he 'doesn't belong in this family'

Samson (played by Sam Hall) has been trying for weeks to make a go of things between him and Amelia Spencer (Daisy Campbell), who seems oblivious to his feelings for her. This has made the Emmerdale youngster very nervous as he doesn’t know how to approach the idea of them being together, leading to some confusion for Cathy Hope (Gabrielle Dowling), who has thought the schoolboy liked her. However, this could all be a cover for the fact he has feelings for Jacob Gallagher (Joe-Warren Plant) and in upcoming scenes on the ITV soap, viewers could see him wanting to spend more time with the shop assistant.

In the first half of the episode, Samson was furious with Cathy for telling people they were in a relationship following their kiss at the party the other night.

Samson had actually done this to make Amelia jealous, thinking she would speak up if she saw him giving another girl attention.

Meeting her in the café, the schoolboy tore into Bob Hope’s (Tony Audenshaw) daughter as he wanted her to tell the truth.

The youngster told the schoolgirl in no uncertain terms would anything ever happen between them and she was an embarrassment.

After realising his daughter was upset over the situation, Bob berated Samson for the way he spoke to Cathy and needing some advice, he turned to Jacob for help.

Firstly, Samson wanted Jacob to sell him some wine or vodka as he felt he needed to drown his sorrows following the day’s events.

With the schoolboy being underage, the shop assistant refused to sell him any alcohol but he asked: “Is Cathy driving you up the wall already?”

He was under the allusion the youngsters were a couple, but Samson told him: “I’ve had Bob around ours telling me to leave her alone.”

“A few people seem to think you’re together,” Jacob replied, with the youngster adding: “I kissed her. One kiss and it meant nothing.

“Except now, Cathy is spouting some fantasy but somehow I am the bad guy,” he continued as Jacob closed up the shop.

Somehow I am the bad guy

Jacob proceeded to get the schoolboy a bottle of pop so they could sit down and talk through the situation together and come up with a resolution.

Samson recalled the conversation he’d had with Cathy, with his friend explaining he had gone too far by shouting at Cathy.

“But what she was saying was worse, seriously,” the schoolboy said, with this being a possible hint he didn’t want Jacob to think they were together as he imagined the shop assistant having feelings for him as well.

After giving his take on what Samson should have done, Jacob told the youngster he should still apologise for what happened.

Eventually, the schoolboy went back to the café and apologised to his friend for shouting at her and for the comments he made.

Samson still stressed they would not be a couple but he stated he wanted them to remain friends, to which Cathy agreed.

She also thought she could help Samson get closer to Amelia but it could be the youngster will begin to use this as a cover for the feelings he is harbouring for Jacob.

Another hint the two boys could have a romance came towards the end of the episode as the Dingle youngster spoke with his father, Sam Dingle (James Hooton).

The father of one claimed he was the one who convinced his son to apologise but Samson told him it was Jacob who talked him through what to do.

Jacob did tell the youngster’s parents, Sam and Lydia Dingle (Karen Blick) their son needed to stay clear of Noah Dingle (Jack Downham) as he was a bad influence.

“What a lovely friend you’ve got yourself there,” Lydia told Samson, to which Sam told his son he was a good friend to Jacob as well.

“It took some guts to say sorry to Cathy. It was the right thing to do,” the father of one said.

“Some blokes just can’t help attracting women,” Sam remarked, with his son’s face seeming somewhat confused as to whether he felt the same way his father did.

This could be because he is secretly pining after Jacob, but doesn’t want to tell his father out of fear he would be rejected.

Although his cousin, Aaron Dingle (Danny Miller) was gay and the family supported him, does Samson worry he won’t be given the same reception?

The show’s producer, Laura Shaw, spoke with Express.co.uk and other media earlier this year and teased there was a lot more to come from the younger cast.

Laura said: “I think it’s really important for the show that we have stories aimed at everybody. What makes soaps different from a lot of dramas is our reach, which is teens right up to 90 plus. We’ve got a lot of viewers to keep happy.

“This year the likes of Noah, Amelia, Samson, Archie, Cathy and Sarah – you’re going to be seeing them much more prominent in the stories because they deal with topics that affect their generation and we see how they handle things.

“It’s really important that we keep our youngsters coming through because they are our next generation.”

So will Samson admit he has feelings for Jacob and will the shop assistant feel the same way?